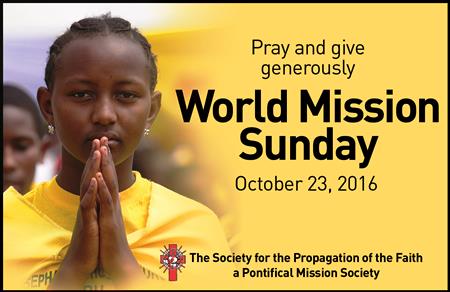 October 23, 2016 is World Mission Sunday. This year's theme is "Mercy Changes the World"

World Mission Sunday, organized by The Society for the Propagation of the Faith, is a day set aside for Catholics worldwide to recommit themselves to the Church's missionary activity through prayer and sacrifice.

A second collection will take place in parishes across the Archdiocese this weekend to support the Propagation of the Faith.

Annually, World Mission Sunday is celebrated on the next-to-last Sunday in October. As described by Pope Saint John Paul II, World Mission Sunday is "an important day in the life of the Church because it teaches how to give: as an offering made to God, in the Eucharistic celebration and for all the missions of the world" (see Redemptoris Missio 81).

Pope Saint John Paul II has also spoken of the Propagation of the Faith's General Fund of support, calling this a "central fund of solidarity." In a message delivered during a World Mission Sunday, the Pope said: "The offerings that will be collected [on World Mission Sunday] are destined for a common fund of solidarity distributed, in the Pope's name, by the Society for the Propagation of the Faith among the missions and missionaries of the entire world."

Every year the needs of the Catholic Church in the Missions grow – as new dioceses are formed, as new seminaries are opened because of the growing number of young men hearing Christ's call to follow Him as priests, as areas devastated by war or natural disaster are rebuilt, and as other areas, long suppressed, are opening up to hear the message of Christ and His Church. That is why the involvement and commitment of Catholics from around the world are so urgently needed. Offerings from Catholics in the United States, on World Mission Sunday and throughout the year, are combined with offerings to the Propagation of the Faith worldwide.

Mission dioceses – about 1,100 at this time – receive regular annual assistance from the funds collected. In addition, these mission dioceses submit requests to the Congregation for the Evangelization of Peoples for assistance, among other needs, for catechetical programs, seminaries, the work of Religious Communities, for communication and transportation needs, and for the building of chapels, churches, orphanages and schools. These needs are matched with the funds gathered in each year. The world's national directors of the Propagation of the Faith vote on these requests, matching the funds available with the greatest needs. These funds are then distributed, in their entirety, to mission dioceses throughout the world.