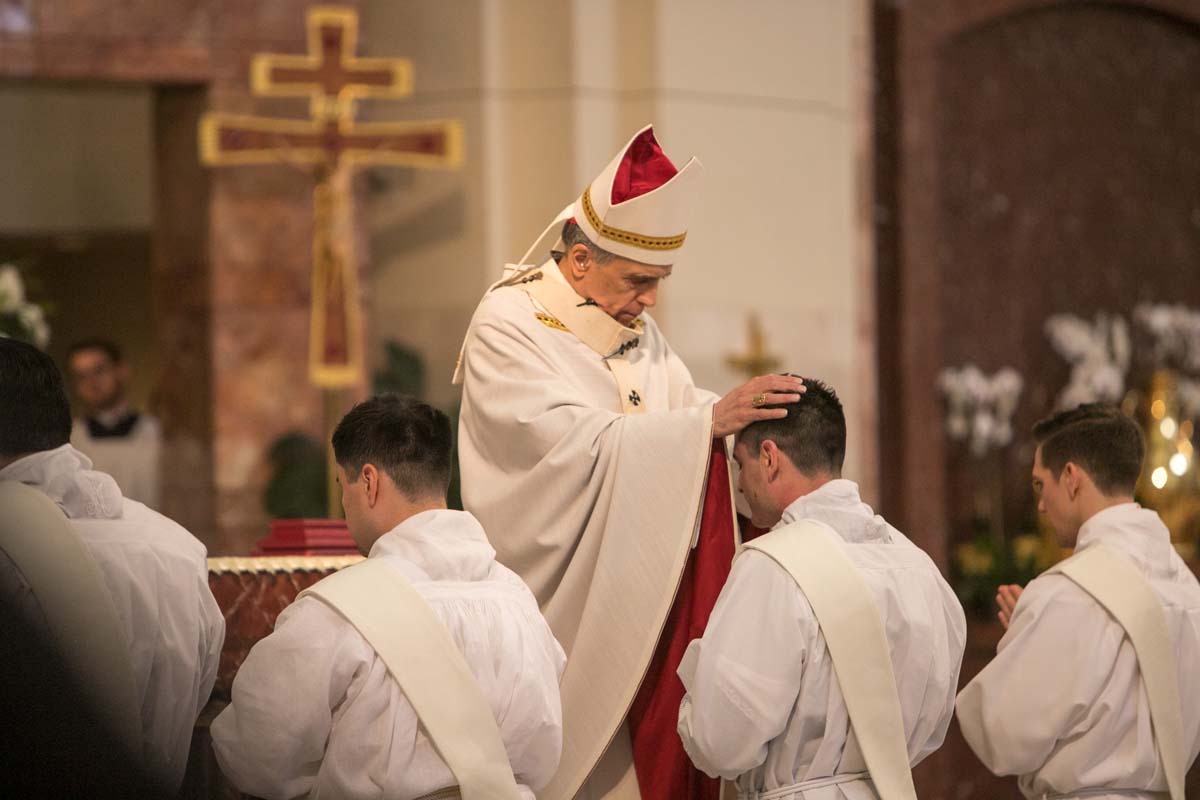 HOUSTON — More than 2,100 faithful packed the Co-Cathedral of the Sacred Heart to standing-room-only to witness the ordination of seven priests by Daniel Cardinal DiNardo at a nearly three-hour Mass on June 1.

IN PHOTOS: 7 men ordained to the priesthood

Among the many supporters, Susie Lara, a member of the Knights of Columbus’ Ladies Auxiliary, said she and fellow members were ecstatic to witness the seven priests being ordained after years of continued support from the group and others. Lara said the Ladies Auxiliary at Blessed Sacrament Catholic Church specifically supported Father Jose Alonso.

“We have prayed for him as well as provided stipends and notes of encouragement to help him along his journey. We also asked him for prayers so that we could continue to do good works,” Lara said. After the ordination, she attended the reception where the new priests were busy greeting well-wishers and giving blessings for those who asked.

Lara said, “We will continue to keep them in our hearts and prayers. We have two more seminarians that we have adopted and with God’s help, we’ll see them through to priesthood. These young men know that that they have 30-plus mothers among those praying for them and all seminarians.”

Drawing laughter from the crowd, Cardinal DiNardo told the men, “You are not the Messiah — He already came. But you are witnesses… pour yourself out for your people.”

Cardinal DiNardo told the newly ordained to look to the Church’s diversity for inspiration in faith.

“The very differences in this local Church, so many different languages, tongues and nations in the priesthood, should enrich you by giving you so many different aspects of the one mystery: Jesus the High Priest who lets us share in it,” he said.

Father Arriola, originally from Guadalajara, Mexico, served his diaconate year at St. Ignatius of Loyola in Spring and is now assigned to St. Bartholomew Catholic Church in Katy. He served as a bilingual teacher with the Alief Independent School District before following his calling into the priesthood.

Father Moses, who entered college at 14 graduating with his bachelor’s four years later and accepted to the University of Houston Law School, decided to enter the seminary. Now 25, he spent his diaconate year at St. Martha Church in Kingwood and is now assigned to St. Faustina Catholic Church in Fulshear.

Father Nwoko, originally from Nigeria, grew up a devout Catholic. He studied in Rome at the Pontifical Institute of John Paul II for marriage and family and created a program to provide resources to engaged and married couples. He spent his diaconate year at St. Charles Borromeo Catholic Church and is now assigned to St. Anthony of Padua Catholic Church in The Woodlands.

Father Stawaisz was ordained while fighting cancer and is assigned to Prince of Peace Catholic Church in northwest Houston. Serving his diaconate year at St. Anthony of Padua Catholic Church in The Woodlands, he recently learned of an inoperable cancer mass in his lung that will be treated. He has already beaten cancer once before when he was a college student at Texas A&M University studying petroleum engineering.

Father Trân, from Vietnam, came to the U.S. as a college exchange student and attended his home parish of Our Lady of Lourdes in north Houston. Spending his diaconate year at the Co-Cathedral of the Sacred Heart, he is now assigned to Christ the Redeemer Catholic Church in Houston.

The Rite of Ordination

They were presented individually to Cardinal DiNardo, who, after speaking about inquiry among the people of God and the recommendation by seminary authorities, declared them worthy to be ordained.

As a group, they were asked a series of questions, including “Are you resolved to consecrate your life to God for the salvation of His people, and to unite yourself more closely every day to Christ the High Priest, who offered Himself for us to the Father as a perfect sacrifice?” They each answered, “I am, with the help of God.”

They also promised respect and obedience to Cardinal DiNardo and his successors. The candidates then prostrated themselves upon the marble floor of the altar as the Litany of the Saints was prayed and the congregants loudly sang back reverberating throughout the Co-Cathedral, “Christ, graciously hear us.”

As part of the prayer of consecration, Cardinal DiNardo extended his hands over the candidates as they knelt and asked, “As co-workers with the order of bishops may they be faithful to the ministry that they receive from you, Lord God, and be to others models of right conduct.”

After the prayer of consecration, assisting priests helped vest their newly ordained brothers with stole and chasuble. Their hands were also anointed and the presentation of the gifts of bread and wine were given to the new priests with Cardinal DiNardo instructing, “Imitate the mystery you celebrate: model your life on the mystery of the Lord’s cross.”

In his own aside, the Cardinal advised the new priests: “God loves you, gentlemen. Be a Jesus priest — keep Him close to you and He will do the rest.”