What happens when a Catholic goes to space? Astronaut-parishioners at St. Paul in Nassau Bay know the answer 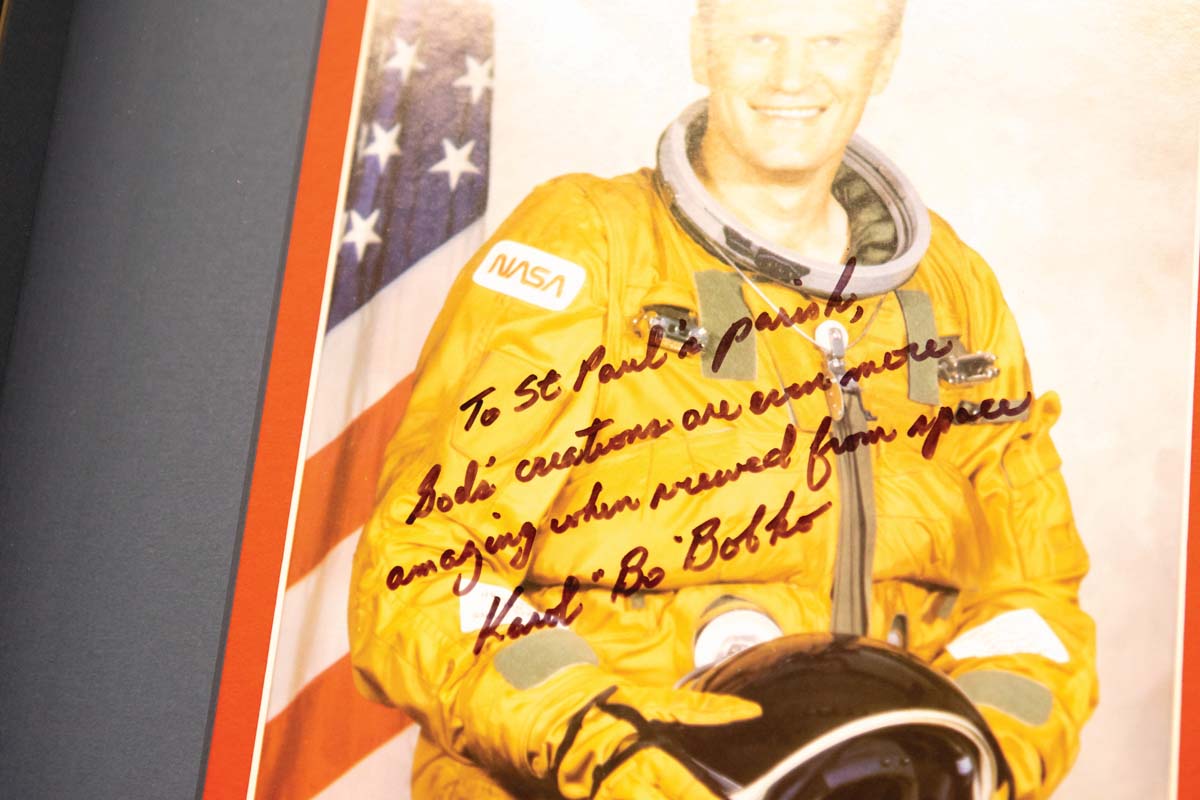 In a room dedicated to NASA memorabilia and artifacts at St. Paul the Apostle Catholic Church in Nassau Bay, a portrait of Karol "Bo" Bobko is signed by the astronaut, who was the pilot for STS-6, the maiden voyage of the Challenger space shuttle. He signed the portrait with a message to St. Paul parishioners: "God's creations are even more amazing when viewed from space." Below, Astronaut Mark Vande Hei carried this pyx aboard the International Space Station in 2017 and 2018. Photo by James Ramos/Herald.

March 15, 2022 Update: After 340 days, March Vande Hei broke the record for the longest U.S. spaceflight. Vande Hei, a Catholic, told Space.com that he took up meditation aboard the International Space Station.

"I decided to start doing it in front of our biggest window, the Cupola. So every morning, before everyone else is awake and with all the lights off, I can sit and look for 20 minutes at the stars," he told CBS News. "I feel very, very fortunate to have those experiences."

Below is the July 9, 2017 story, which profiled Vande Hei's first journey into space.

HOUSTON — Mark Vande Hei had 168 days to contemplate humanity’s relationship to God and God’s creation from a fairly unique perspective: 240 miles above the Earth, which he circled 2,617 times.

Photos and videos from the International Space Station can’t do justice to the experience of being there, immersed in the immenseness of the cosmos, he said.

“When you’re that high up, and you can look at one view of the Earth and see from Denver all the way to Houston, it’s just hard to believe you’re all that significant,” Vande Hei said, who left the station’s relative safety four times to make repairs and upgrades on spacewalks totaling more than 26 hours.

“You feel very, very tiny. It’s challenging to your perception of your personal importance. It was very humbling for me,” he said.

The NASA astronaut and retired Army colonel served as flight engineer for back-to-back missions ISS-53 and ISS-54 from Sept. 12, 2017, to Feb. 28, 2018. He took with him his Catholic faith, his Rosary — and Holy Communion, which he shared with the other Catholic voyagers aboard ISS.

Vande Hei wasn’t the only one aboard to wax philosophic. In October 2017, he and his five other crew members shared their thoughts and observations with Pope Francis via video uplink. One of the crew members, an Italian astronaut, translated the conversations. After their safe return, crew members visited the pontiff in Rome and presented him with his own official space flight suit, complete with a papal pelligrina.

Vande Hei, his wife Julie and their two children are parishioners at St. Paul the Apostle Catholic Church in Nassau Bay, which sits a few blocks from NASA’s Lyndon B. Johnson Space Center, which served as the epicenter for many NASA space missions, including the legendary Apollo missions.

St. Paul was founded in 1964 for the purpose of serving the burgeoning number of families involved in the U.S. space program.

“They purposely chose the Apostle Paul as the patron and the namesake because he took the Gospel into the Mediterranean world,” said Father Wencil Pavlovsky, St. Paul pastor. “And then men and women from here have taken the Gospel into the universe.”

From 500 founding families, the parish has grown to approximately 2,500 families, which over the years have included NASA engineers, scientists, mission specialists, flight directors, employees of supporting aerospace companies and, of course, astronauts — 35 of them so far.

Many astronauts have carried mementos and symbols of their faith on their missions. St. Paul’s astronauts have been no exception, and have gifted many of their personal treasures to the parish — so many, that in 2015, the church converted its religious items store into a museum-quality gallery of space memorabilia called the Alpha Omega Room.

Each item is registered with NASA’s digital archive. One of the space agency’s archivists worked with two parishioners who co-curated the exhibits, Rosalie Daves and Sally Wrobleski.

Daves said that during a clean-out of the church, they discovered astronauts’ mementos stuffed in closets and drawers, and began the arduous task of investigating their origins, cataloging each item and pursuing their authenticity.

“It was very interesting once we started pulling it all out, to be able to go back in time and see the rich history that our church has,” Daves said. “We really felt it was our duty to preserve what we have.”

About two dozen exhibits are on display, which isn’t the sum of St. Paul’s space artifacts. The church also has a trove of items from Father Anton Sheltz, who served as St. Paul’s pastor from 1982-1994. Father Sheltz died in 2003. After hearing about St. Paul’s restoration efforts, his brother, Bishop George A. Sheltz, donated space-related items from his brother’s belongings.

Among those belongings was a pyx, which in the parish’s institutional memory, had been carried to space by one of St. Paul’s former parishioners. However, there was no way to authenticate that.

“When Mark asked if he could take the Blessed Sacrament with him so he could receive communion on Sundays, I said, ‘Yes. If you’ll do me a favor,’” said Father Pavlovsky.

The favor was for Vande Hei to take Father Sheltz’s pyx back to space. Upon its return, it became part of NASA’s official registry and St. Paul’s collection, along with Vande Hei’s Rosary.

There’s also a pyx from astronaut Brian Duffy, who piloted space shuttle Endeavor on mission STS-57 in 1993. Other items: many autographed photos, mission patches and an American flag that, after it was returned to Earth, covered the altar before each Mass offered for astronauts’ safe journey.

Not in the gallery but on exhibit is a luna — the vessel that holds the consecrated Eucharist within a monstrance. The luna was taken to space by parishioner Michael T. Good aboard the shuttle Atlantis in 2009 for STS-125, the final mission servicing the Hubble Space Telescope. Good also took the Vatican flag, which is displayed in the gallery. The monstrance is in St. Paul’s adoration chapel.

For the earthbound, the gallery offers a perspective of a tight-knit faith community within an even closer community of space explorers.

Add that perspective to Vande Hei’s: “The weekend before I left to go back to Earth was very thought-provoking for me. I knew I was going to go through the atmosphere. The spacecraft was going to heat up. My continued life depended on a lot of things, like the parachute working and the heat shield working. A lot of that was all out of my control. So certainly it was a time to think about your mortality a little bit.”

As it happened, he said he came across an introspective documentary about Jon Foreman, frontman for the musical group Switchfoot, who was on a personal mission to play 25 concerts in 24 hours.

“At one point, the lead singer said, ‘I think we’re all God’s song,’” Vande Hei said. “Somehow, that made me realize that I didn’t have to spend so much time trying to logic through the whole thing. I just needed to be thankful for my notes in the song. And I’m just appreciative of the gift that it was to experience all this.”