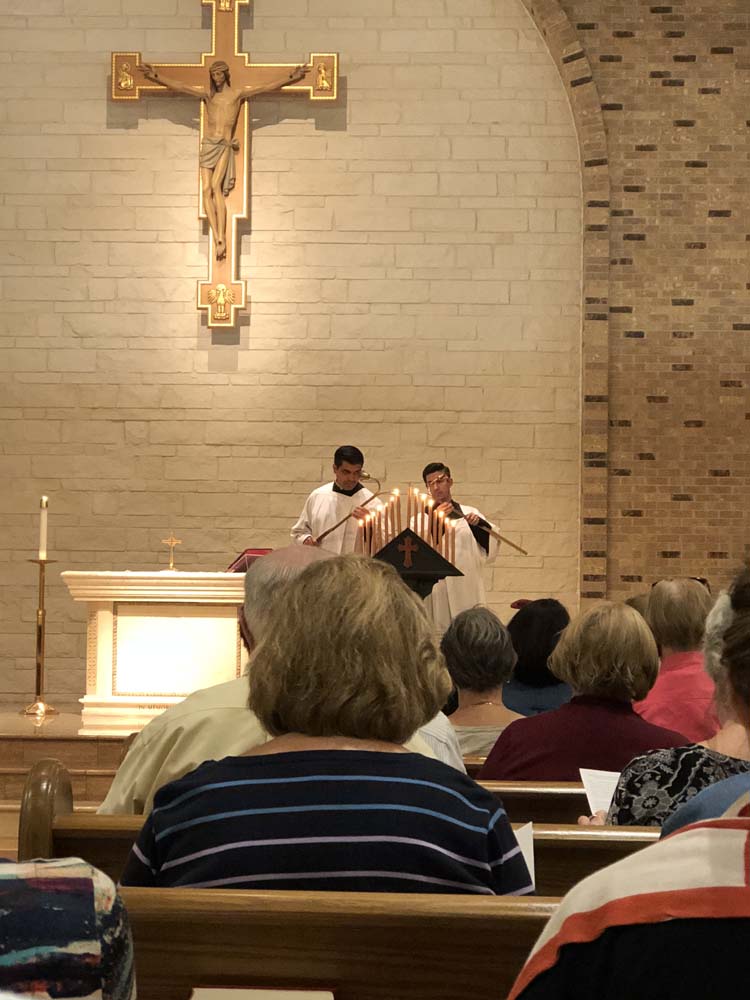 HOUSTON — For the first time in the parish’s fifty-year history, the ancient service of Tenebrae was celebrated at St. John Vianney Catholic Church in Houston on the Monday of Holy Week, March 26.

Historically, the first two hours of the Divine Office, Matins and Lauds, were merged into one single office during the Sacred Triduum, and the celebration was anticipated the afternoon or evening before Holy Thursday, Good Friday, and Holy Saturday, respectively.

As the Latin word Tenebrae means “darkness” or “shadows,” the celebration of the liturgy during the morning lost a powerful element of mystery.

However, the ancient liturgy has seen a resurgence in the last decade and is now offered with some regularity, either in its full, monastic form, which can last upwards of two and a half hours, or in a simplified format adapted for parish use. St. John Vianney’s Service of Tenebrae followed the latter.

The entire office is sung, including many psalms, canticles, versicles and responses. Scripture lessons from the Lamentations of Jeremiah were also chanted to the traditional, ancient tone by parish cantors.

A parish Vesper choir, comprised of volunteer adults, professional staff singers, and treble choristers between the ages of ten and fifteen, offered a large amount of music for the service.

Under the direction of Kirk Rich, associate director of music and organist, the choir’s musical selections included the North American premiere of Allegri’s “Miserere mei” (Psalm 50/51) in an unpublished reconstruction by French musicologist Jean Lionnet (1935-1998), as recorded by the ensemble A Sei Voci on the label Astrée Auvidis in 1994.

Rich was granted access to the late scholar’s manuscripts in the archives of the Centre de musique baroque de Versailles, from which he created a modern performing addition for the Vesper Choir at St. John Vianney.

This particular version was written in a style seeking to capture the way the professional singers of the Sistine Chapel may have sung the piece when it was newly composed circa 1638, including many florid embellishments and ornaments.

Also included were responsories by Marc’Antonio Ingegneri, the music of the service was designed to transport the faithful to the famous Tenebrae services in the Sistine Chapel, which drew thousands of pilgrims every year, including Mozart and Mendelssohn.

Traditionally, the Tenebrae service features fifteen candles, which are progressively extinguished over the course of the office until there is complete darkness.

These fifteen candles, said to represent Christ, the three Maries, and the eleven remaining disciples, are supported by a triangular candelabra called a hearse. Since few parishes own such an apparatus, members of the parish-sponsored Boy Scout troop constructed and donated a custom hearse specifically for the service at St. John Vianney.

According to Craig Hagedorn, he and his son Kyle built the Tenebrae hearse. The construction was made from recycled mahogany threshold from a neighbor’s home, which was damaged during Hurricane Harvey.

“What a privilege to make something to Glorify God during our recovery. Some of the wood was recovered from Harvey,” Hagedorn said in a Facebook post.

The ritual actions and officiant’s prayers were led sensitively by three seminarians from St. Mary’s Seminary, Houston, including: Luis Garcia, Luis Rodarte, and Ricardo Arriola of St. John Vianney, who will be ordained to the diaconate this summer.

The liturgy was celebrated in the parish’s chapel, which seats 350, was filled with at an estimated four hundred attendees, according to organizers.

Based on the overwhelmingly enthusiastic responses, the Tenebrae service will most likely become an annual tradition during Holy Week at the parish, they said.