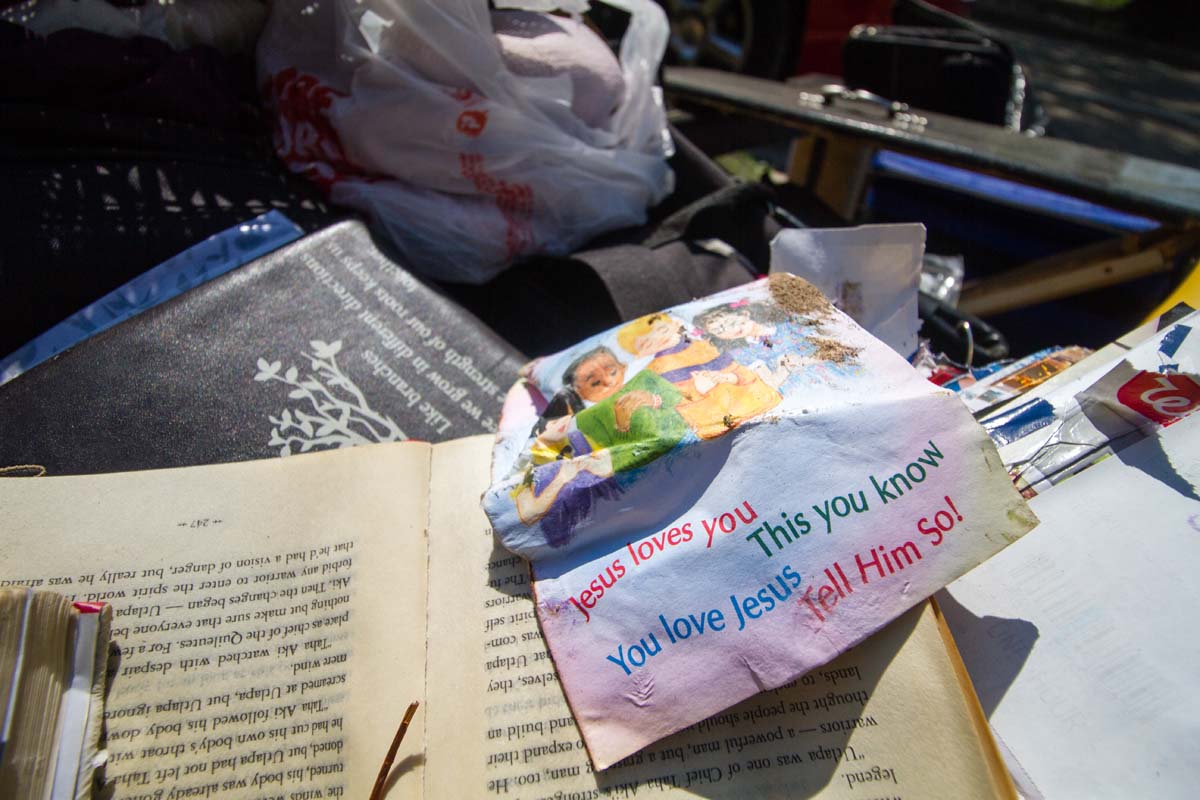 A dried up child's prayer card is seen as residents in the Meyerland neighborhood of Houston empty their homes as they begin to recover from Tropical Storm Harvey's catastrophic floods Aug. 31. The Buffalo Bayou, which courses through the nation's fourth largest city, surged past record numbers and flooded thousands of homes in Houston. Photo by James Ramos/Herald.

HOUSTON -- Hurricane Harvey took a wayward path through the Western Gulf Coast. Starting in Corpus Christi and Victoria, then slowly through Houston, and back into the Gulf of Mexico. Next to Beaumont and Port Arthur, and even Louisiana, the catastrophic storm left a deadly wake of historic rain and catastrophe.

Near Corpus Christi, the Category 4 storm made landfall Aug. 25 and obliterated entire blocks in the coastal communities of Rockport and Fulton.

In Rockport, Harvey slammed into the Our Lady of Schoenstatt Shrine. Walls and tall trees fell around its renown “Little Chapel,” an exact replica of a German chapel. Nearby winds reaching 125 mph battered the small sanctuary -- later found still standing, despite severe roof damage --

Bishop Brendan J. Cahill of Victoria said prayers uttered in Texas ranged from pleas for protection to asking God for the courage to live with charity and great patience, said. In his rectory sixty miles away in Victoria, the bishop kept vigil praying to the Blessed Mother under the two Marian devotions: Mary, Star of the Sea and Our Lady of Prompt Succor.

"When the eye of the storm comes, all you can do is pray," he said. But soon, he "surrendered" the future to God, and went to bed. The next day, without power, Bishop Cahill listened to the radio as Harvey stalled over his 10-county diocese.

Then, Bishop Cahill emerged from his home to find an "incredible amount of damage."

"We had no idea what happened," he said. Harvey was "stronger than we could imagine."

Earlier prayers for protection turned to prayers for courage to live with the virtues of charity and great patience, he said. Despite the suffering and deep sadness as residents began to see the wreckage, Bishop Cahill saw the heroism of helping.

"The resolve to help one block, one parish at a time continues to be strong," he said. In the Church, we "accompany and be with people." Victoria Catholic schools, some that welcomed Katrina evacuees in 2005, now find themselves taking in other students from schools much closer to home, according to Theresa Dent, principal of Our Lady of the Gulf Catholic School in Port Lavaca.

Then, in Galveston-Houston where Harvey idled and pouring 10 to 49 inches rain, Father J. Phong Nguyen answered a desperate call for help. The parochial vicar at St. Vincent de Paul Catholic Church in Houston drove through the rain to a northwest Houston neighborhood flooding to "the tops of the garage."

On a rescue mission, Father Nguyen commandeered a boat after finding water too high to drive through and sped through the neighborhood. After bringing a family to safety with other rescuers, he heard more screams for help as they passed by more homes. For at least three or four hours -- Father Nguyen said he's unsure how long he helped because he made so many trips -- the priest helped pull stranded families from their second floor windows and homes.

The priest said the water was two feet when he began, but when he noticed the boat going over unusual bumps, unlike before, he realized that six to seven feet of water rose, hiding once-visible cars and stop signs. He was hitting the tops of cars.

Despite not knowing how to swim, and filled with fear, the priest felt called "the love for the people; I cannot leave the people there," knocking on houses they passed to checking for anyone trapped.

"Before I started, I prayed to Mary," he said, begging her to be with him. "My heart broke in two. It was too much. The water just kept rising and rising."

Ordained in 2011, the Vietnamese-born priest said he had seen floods before, but had never seen such high water in his life. City officials said at least 70 percent of Harris County was covered in at least 1.5 feet of water. 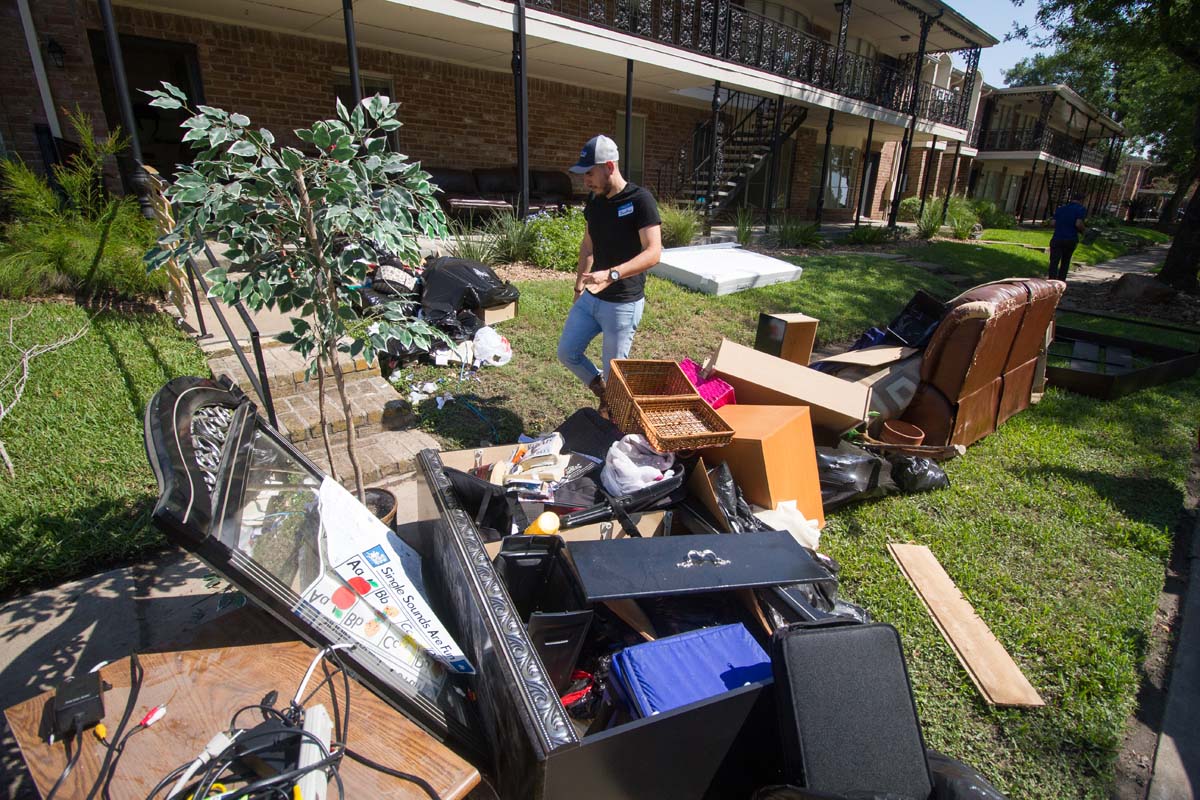 While bayous and rivers still recede and rise in both Victoria and Houston, Harvey's outer bands reached into East Texas, smothering Beaumont and Port Arthur with rain. Shortly offshore and downgraded to a tropical storm, Harvey made a second landfall Aug. 30 with more rain, drenching the already soaked region.

Drainage pumps failed as entire interstates became miles-long extensions of the Gulf of Mexico and the Neches River.

In Beaumont the next day, rising waters cut off the city's water supply. The chancery offices remained closed, and a nearby hospital evacuated, another on water conservation.

In Port Arthur: a disaster. On Facebook Live, the city mayor video streamed his house knee-deep in water.

"Our whole city is under water," he said.

Parishes and schools throughout the Beaumont diocese saw some damage, some disastrous.

At least one parish remained unsafe to visit by the afternoon on Aug. 31. Then, parishes shared plans to host other congregations affected by Harvey. Beaumont Bishop Curtis J. Guillory dispensed Sunday Mass obligations for the Labor Day weekend for those who could not yet travel, "otherwise, all are welcome," a post on the diocesan Facebook page stated.

In a statement, Bishop Guillory said, "Not only have I witnessed the devastation, I have also witnessed your courage, your compassion, and your willingness to help each other.

Next door in Louisiana, Harvey caused parochial and public school closures Aug. 30 and 31 as far down south as Terrebonne Parish to east in Tangipahoa Parish, north of New Orleans, La. Shelters also opened in Lake Charles and Alexandria to house Texas evacuees.

Now Tropical Depression Harvey heads further inland, leaving a wake of mayhem that changed the lives of millions, including the 310 Catholic parishes along the Texas Gulf Coast. After visiting Corpus Christi and Austin with state officials Aug. 28, President Donald Trump is expected to visit a still-flooded Houston on Sept. 1.

Throughout the Gulf Coast, from Victoria to Houston and Beaumont, rising rivers continue to threaten. But as in Corpus Christi, Victoria and Houston, Port Arthur and Beaumont both begin the recovery process as the waters begin to fall.