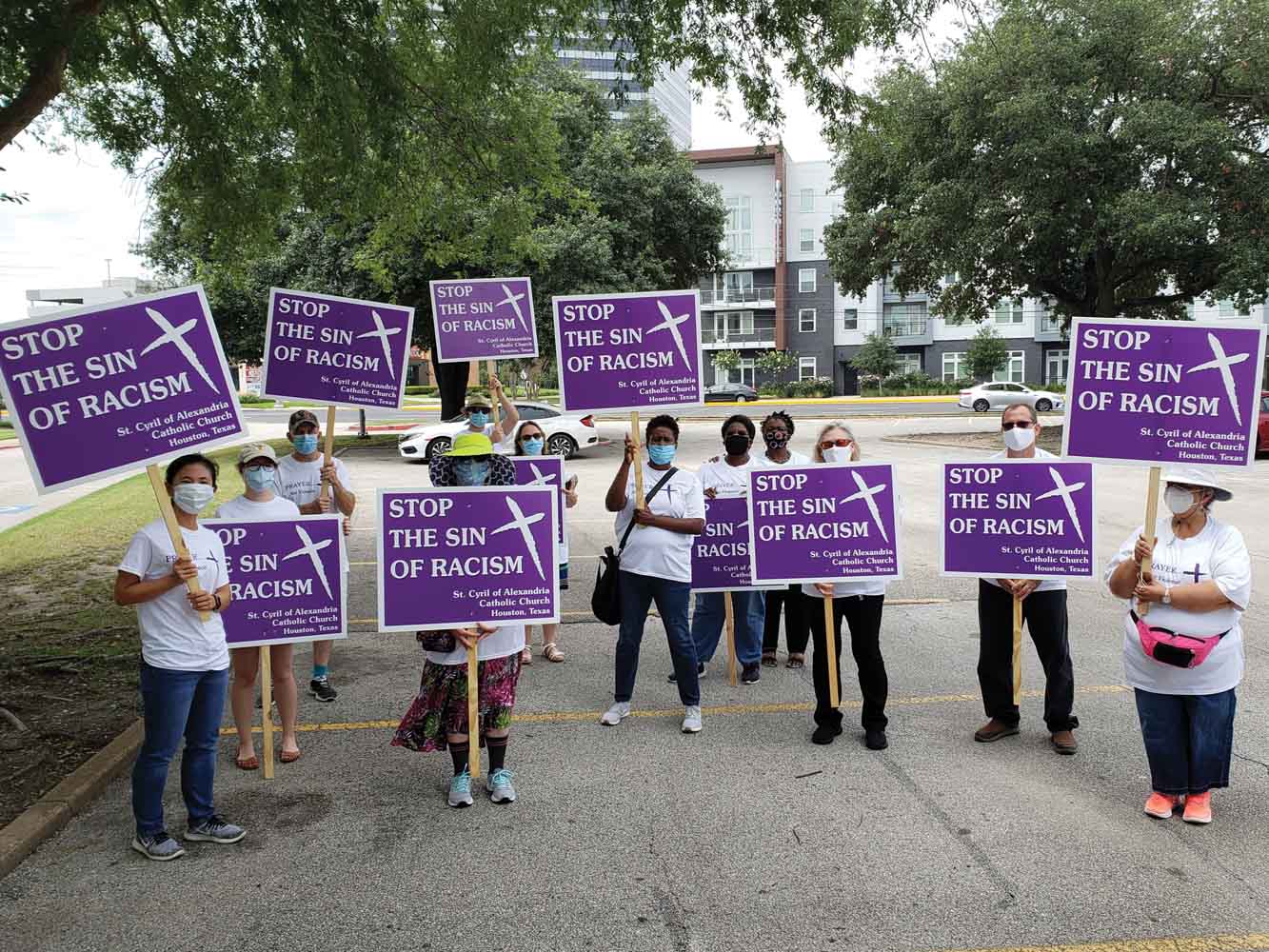 On June 27, a group from St. Cyril of Alexandria Catholic Church called “Prayer Not Violence” stood along Westmeimer and Rogerdale Ave. with signs that said “Stop the Sin of Racism” in Houston. Their efforts reached an estimated 2,400 cars in the hour they stood with signs speaking out against racism. (Photo courtesy of Deacon Bob Angelich/St. Cyril of Alexandria Catholic Church)

HOUSTON — On June 27 and July 9, a group from St. Cyril of Alexandria Catholic Church stood near the corner of Westheimer and the Sam Houston Tollway to “be a visual reminder to the world that racism is a horrific sin.”

Deacon Bob Angelich, who was ordained in the Gary, Indiana, Diocese in 2003, said the group stood along Westmeimer and Rogerdale Ave. for an hour with Prayer Not Violence T-shirts and signs that said “Stop the Sin of Racism.”

“We had two individuals count cars a few times in five-minute intervals. It consistently averaged 40 cars a minute,” he said. “So, we reached about 2,400 cars in the hour. The response was overwhelmingly positive. There was a lot of horn tapping... waving from drivers and passengers.”

The idea began when, after his ordination, Deacon Angelich was assigned to the Cathedral of Holy Angels in the heart of Gary, Indiana.

“Gary is primarily an African-American community full of wonderful people. Unfortunately, for various reasons, it is also a city plagued with a horrific amount of violent crime,” he said. “So, I created a ministry called Prayer Not Violence. Our goal was simple — to help stem the amount of violence in the schools and community of Gary.”

In 2013, Deacon Angelich’s full-time job in the project/construction side of the oil/gas industry relocated him to Houston, where he joined St. Cyril of Alexandria Catholic Church.

The horrific death of Houstonian George Floyd at the hands of police officers in Minneapolis, Minnesota, compelled Deacon Angelich to restart the ministry in Houston.

“The harsh reality of racism needed to be addressed. Racism in any form, whether it is physically violent or not, is wrong,” he said. “To God, all of racism is a sin. It is an evilness that takes the entire human family and willfully tries to fracture it apart.”

Deacon Angelich said legal and social efforts to stop racism have their place, but it is “such an evil it cannot be legislated away.”

“Racism says part of God’s creation is defective and inferior because of skin color or culture,” he said. “(We) cannot legislate the content of the heart where this evil resides. What is needed is the conversion away from a heart full of racist poison to a heart filled with the light and love of Jesus Christ.”

The ministry will continue to hold these events every few weeks through the summer. Ones does not have to be a member or attend St. Cyril of Alexandria parish to join the ministry.

“We will also continue to discern other ways to spread the word of God regarding racism,” Deacon Angelich said.

He said he wants to reach as many people as possible beyond the church doors with the word of God that racism is a sin and to turn away from this sin.

“For it is the absolute spiritual truth that all human life is of equal value and deserving of dignity,” he said.