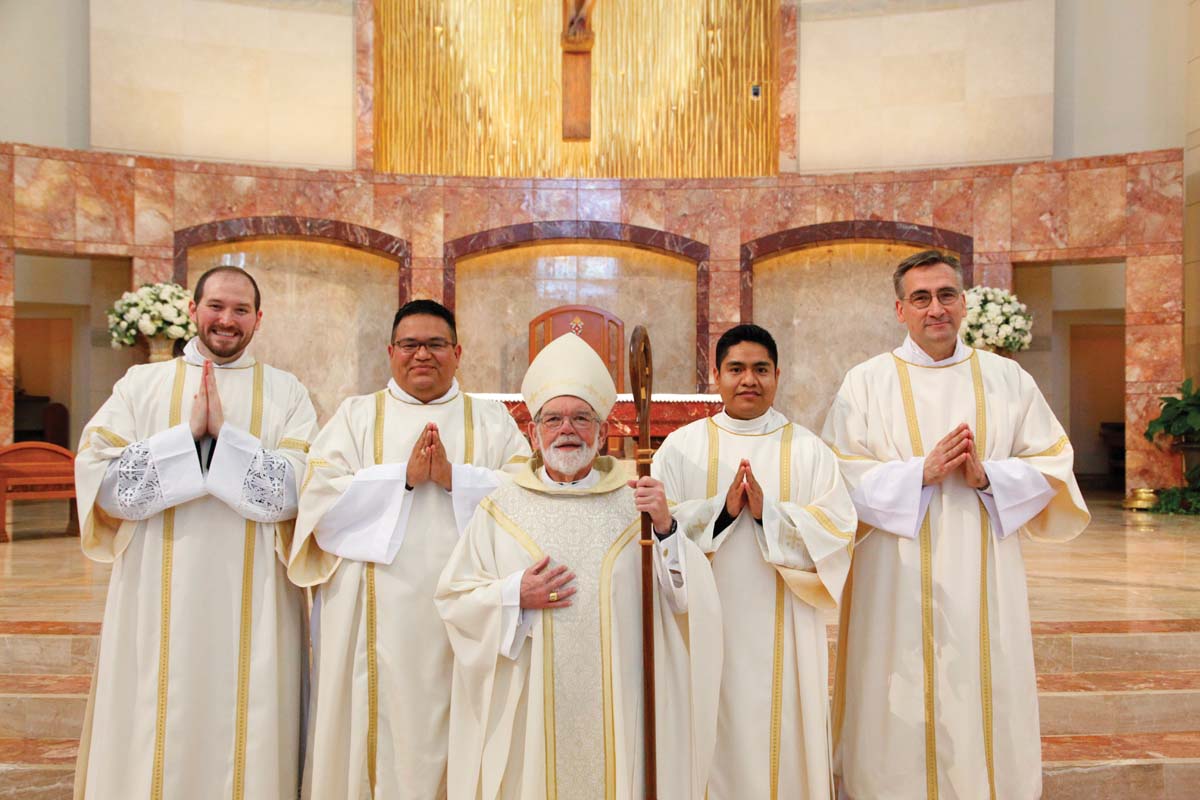 Auxiliary Bishop George A. Sheltz (center) ordained (left to right) Robert David Hust, Matthew Gilbert Suniga, Jose Luis Gutierrez and Paul Anthony Foltyn to the Sacred Order of Diaconate in 2017. The four transitional deacons will be ordained to the priesthood on June 2 at the Co-Cathedral of the Sacred Heart in Houston and are set to complete their final step of their journey to become a priest. Herald file photo.

Deacons Robert David Hust, Matthew Gilbert Suniga, Jose Luis Gutierrez and Paul Anthony Foltyn will be ordained to the Sacred Order of the Priesthood at 10 a.m. on June 2 at the Co-Cathedral of the Sacred Heart, 1111 St. Joseph Parkway in Houston.

Deacon Foltyn was born in Houston, and attended St. Vincent de Paul Catholic School and St. Thomas High School. While he currently serves St. Bartholomew the Apostle in Katy, his home parish is Shrine of the True Cross in Dickinson. He also served summer assignments at St. Helen in Pearland, St. Jerome in Houston and did a pastoral year at St. Francis de Sales in Houston.

“My call has been a journey, comprised of people and events along the way which pointed me towards the priesthood,” Deacon Foltyn said. “The seeds of a priestly vocation were planted early in my life, and throughout high school, college, and working as a mechanical engineer, the call to ‘something more’ remained. Even though I continued to volunteer more and more for my parish, that feeling to ‘something more’ increased.”

After meeting with the Office of Vocations to share his journey with the staff, he was soon accepted to begin studies for the priesthood at St. Mary’s Seminary. Deacon Foltyn said after his ordination, he looks forward to “serving the people of God through the Sacraments, prayer and especially in the celebration of Holy Mass.”

Deacon Gutierrez said he heard his call to join the priesthood at the young age of five.

Born in Izucar de Matamoros in Mexico, he attended schools in the southwestern part of the Mexican state of Puebla.

Deacon Gutierrez, who said he enjoys cooking, literature and philosophy, said he looks forward to being a priest and “becoming an instrument of God’s grace for His people.”

He currently serves at St. Michael Catholic Church in Houston, and also served at St. Mary of the Immaculate Conception in La Porte, where he also served at the Houston International Seafarer’s Center at the Port of Houston as part of his assignment, and St. Helen in Pearland.

St. Paul’s writing to the Romans: “Never grow lack in zeal, be aglow with the Spirit, serve the Lord. Rejoice in your hope, be patient in tribulation, be constant in prayer,” encourages Deacon Hust. St. Joseph is also his patron. “Humble, virtuous, and with a life completely centered on Jesus is how he was and how I desire to be,” said Deacon Hust.

He said he first recognized his calling to join the priesthood in the eighth grade during his catechesis for the Sacrament of Confirmation.

“I didn’t know what to do then, so I just went on with life. In high school the call came again. I didn’t know where to turn, and it just seemed like college was the normal next step I should take,” said Deacon Hust.

Continuing through college, he wrestled with the married life or the priesthood.

“After years of prayer and discernment, and trying to use the gifts God gave me for His glory, I went to my Holy Hour in the middle of the night,” he said. “I told God that ‘I give up.’ Once I gave up, He responded: ‘finally.’ Then He reminded me of ‘the Call,’ His still, small and gentle voice that had been there as a server, at Confirmation, in high school, in college and in all my pursuits after college. His peace set into my heart. I called the vocations director the next day.”

As a priest, Deacon Hust said he looks forward to “conferring the Sacraments, especially Reconciliation and the Most Holy Eucharist. To journey with people in this pilgrimage of life, in the good and the bad, pointing always to Jesus Christ, is my delight.”

Outside his religious duties, Deacon Hust said he’s a “self-professed nerd,” and finds interest in a range of subjects: from theology, to hunting and fishing and barbecue, rugby and the arts.

Deacon Suniga was born in Austin, and attended schools in Del Valle. He was first attracted to the priesthood because of the good example his parish priest gave him.

“Being an altar server beginning at the age of 10 helped me to deepen my love for the Church and the Sacraments, and I found priestly ministry to be a beautiful way of life,” he said.

Before serving at St. Faustina Catholic Church in Fulshear, where he is now, Deacon Suniga served at Blessed Sacrament and All Saints, both in Houston, and Christ the Good Shepherd in Spring.
In joining the priesthood, he said he looks forward to “preaching, teaching and celebrating the Sacraments, and being present to my people and brother priests.”

While he grew up in Austin, Deacon Suniga said, “I believe that God has called me to serve the Church in Galveston-Houston, and like a missionary, I must go where I am sent.”

As the faithful continue to discern their vocations to the priesthood and religious life, Deacon Foltyn shared a special word to those men discerning the priesthood: “God continues to call men to the priesthood. If you think you may have that vocation, I would encourage you to get in touch with the Vocations Office of the Archdiocese who can guide you and help you discern your calling.”