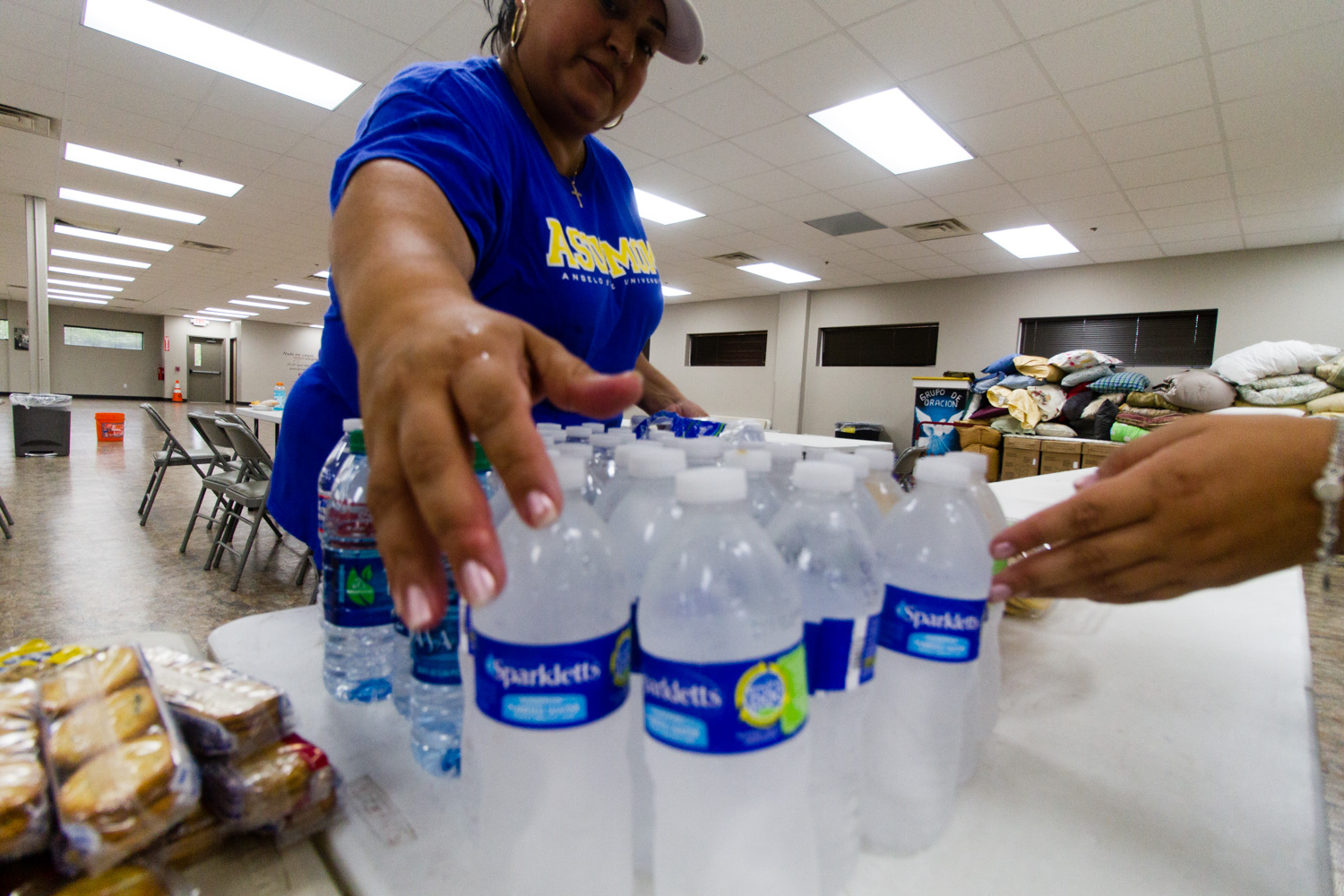 Josie Iracheta sets up a meal station at a Sacred Heart Catholic Church shelter in Conroe, Texas  Aug. 28. The north Houston parish opened their doors to when the massive storm crippled the Galveston-Houston region with continuous rains, causing rivers like the San Jacinto to overflow their banks, prompting mandatory evacuations.

HOUSTON -- With floodwater as high as 20 feet from swelling bayous and waterways, thousands of homes in the Archdiocese of Galveston-Houston flooded as Tropical Storm Harvey continued to batter southeast Texas Aug. 28.

Bishops from dioceses along the mid-Texas Gulf Coast, including Victoria and Galveston-Houston, granted dispensations from regular Mass Sunday obligations Aug. 27.

The storm, which made landfall a day earlier as a Category 4 hurricane, was downgraded to a tropical storm and claimed at least four lives. The record-breaking rainfall, as much as 28 inches over 24 hours in four counties in the archdiocese, was "unprecedented" and "catastrophic," according to the National Hurricane Center. The region typically sees about 49 inches of rain in a year.

By Monday morning, mandatory evacuations were ordered throughout the 10-county region in the Archdiocese, due to rapidly rising rivers. Storm damage cut power for more than 300,000 people in the region, and by Sunday afternoon on Aug. 27 there were at least 250 highway closures throughout Texas, according to the Texas Governor Greg Abbott’s office. Overwhelmed 911 call centers helped city and state agencies perform more than 1,200 water rescues from vehicles trapped in water, rooftops and attics in areas like Galveston, Greenspoint, Dickinson and Meyerland, Houston city officials said.

30 miles north of Houston, 29-year-old Eric Robinson used his Sunday morning to walk three miles in the floodwaters to 9:30 a.m. Mass at Sts. Simon and Jude Catholic Church in The Woodlands.

While Father Pat Garrett, the parish pastor, echoed Daniel Cardinal DiNardo’s dispensation of Sunday Mass obligations in a parish-wide communication, the 29-year-old still ventured into the waters outside his apartment complex to walk to church. The usual trail he takes to get to the parish for daily Mass was flooded, as was the major road that leads to the church community of more than 5,000 registered families.

“I made it in time for the 9:30 a.m. Mass,” he said. “It’s normally a crowded Mass but there were about 100 people.” In his homily, parish pastor Father Pat Garrett, encouraged all to pray for flood victims and first responders. After Mass, Robinson trekked back to his apartment, wading through waist deep water as Lake Woodlands overflowed its shoreline.

This is not the first time the parish has seen floodwaters come close to the church grounds. In last year’s Tax Day flood, Sts. Simon and Jude’s parish’s event center was activated as a Red Cross shelter, according to parish emergency management.

Activated again this year, by Sunday evening, at least 22 people took shelter at the church which can serve up to 100, parish staff said. Combined efforts from nearby churches readied to the shelter serve evacuees rescued via boat from a nearby flood-stricken neighborhood.

Sts. Simon and Jude joins Sacred Heart Catholic Church in Rosenberg in serving as one of at least two Red Cross Shelters operating out of Catholic Churches in the Archdiocese. A bridge in Rosenberg, a town 35 miles southwest of Houston, collapsed after being overwhelmed with floodwaters.

Thousands are affected by Hurricane Harvey.  Recovery from catastrophes such as Harvey takes years. We need your help to recover from this disaster and continue to serve the faithful of the Archdiocese. Thank you for your prayers and your generosity.

"I feel like I'm still in shock," Danielle Noonan said, walking through her Sienna Plantation neighborhood Aug. 27. She could still see remnants of a tornado that ripped through the Southwest Houston community late Saturday evening on Aug. 26.

No sooner than her husband Chris told her to get into the closet where her two sons were already hiding, the tornado touched down a quarter-mile away, damaging at least 50 houses, shredding roofs and windows, snapping hallowed oak trees "like toothpicks" and flipping fences.

The next day the community tried to recover quickly, but strong rains hampered efforts. Not until a trip to the grocery store for more supplies did Noonan see how shaken by the tornado her two children were.

One of them "was really scared,” she said. “It was hard for him to see his friends' homes just destroyed. He didn't want to leave the safety of his home."
Noonan saw it as a good teaching moment about how to live a life of true prayer and love in the community. In an effort to rally the local churches in prayer, Noonan joined her parish of St. Angela Merici Catholic Church in Missouri City in hosting a Divine Mercy Chaplet and praise and worship session on Facebook Live, with others viewing from homes across the area since travel was discouraged due to the weather.

"These are the moments that we share the Gospel," she said. "It's easy to share when things are really great, but when things are flying around, literally, it's harder to do. This is when you know we have to make it happen.

Noonan and her family evacuated to Central Texas under orders of mandatory evacuation due to the threat of the rising Brazos River Aug. 28.

A photo showed a storied home in the Ben-David family line decimated by Harvey; the two-story structure painted in friendly yellow and white was cut in half by winds topping 130 mph.

At first she denied it in disbelief, "the stairs aren't in the right spot," or similar details, but after sending the picture to her two siblings, they confirmed the worst: it was the family home, only Harvey had moved the stairs and trees.

"We've had that house in our family for so long," said Ben-David in the safety of her Sugar Land, Texas residence. The home belonged to her grandparents in the 1960s, and for the next half-century, played host to "countless summers, vacations, Christmases and Easters," for the family.

"It's ... heartbreaking because there's so many memories," she said. "It was our go to place to be by the sea."

Ben-David said her family is devastated, especially her parents who were restoring the home to its former glory after it fell into some disrepair. "It would have been nice to let her" 92-year-old grandmother enjoy the home, she said. Now "we're not sure what we'll do with it," but the "memories always stay cherished."

Additional heavy rainfall of 15 to 25 inches is expected through Friday, with Tropical Storm Harvey estimated to slowly move along the Texas coast, according to the National Hurricane Center.

The Texas Catholic Conference said the bishops of the state's 15 dioceses are coordinating relief efforts. The conference requested "people join in prayer for the coastal and inland areas being affected, and consider donating money to local dioceses and Catholic Charities."