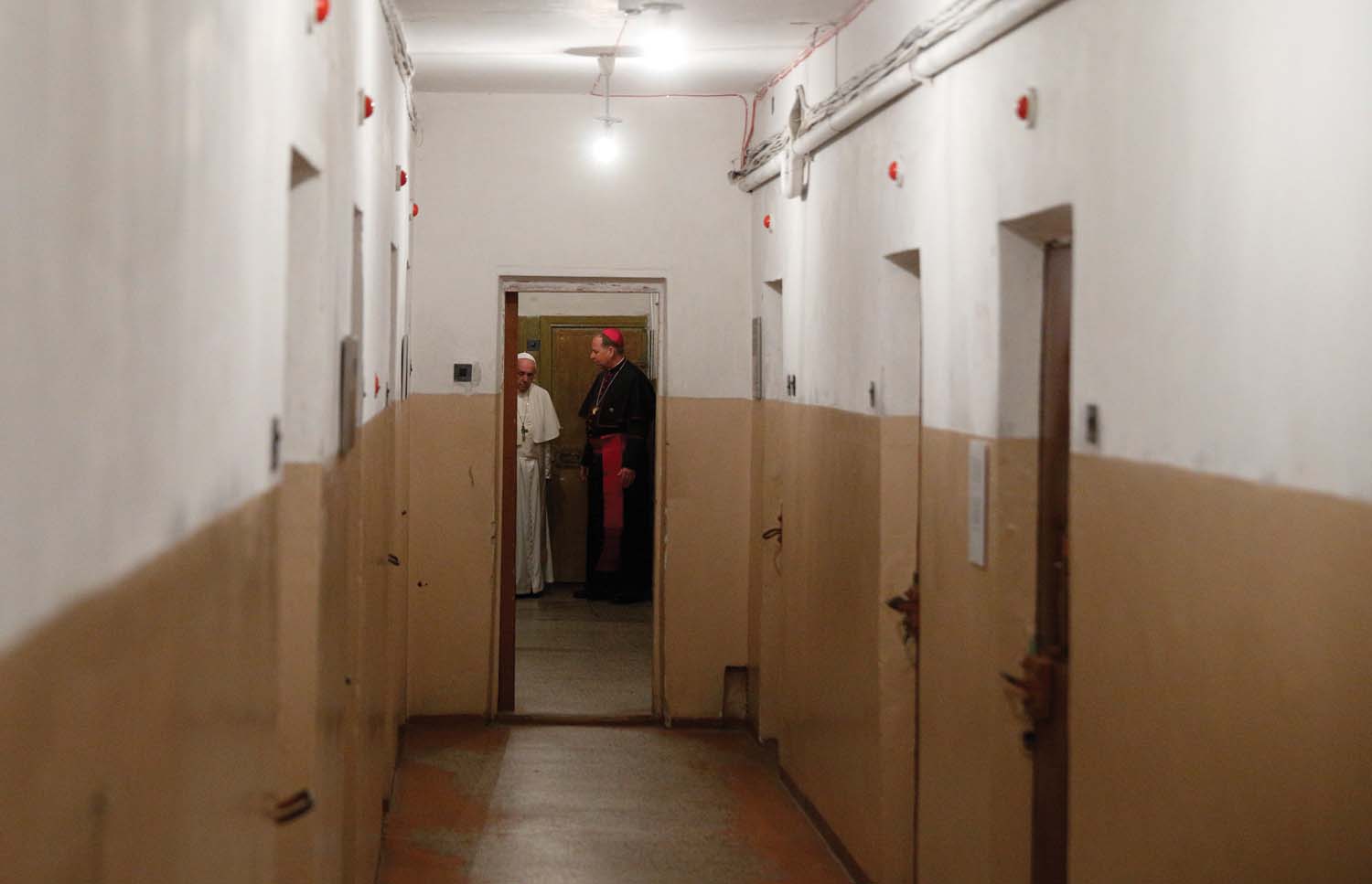 Pope Francis walks with Archbishop Gintaras Grusas of Vilnius as he visits the prison area in the Museum of Occupations and Freedom Fights in Vilnius, Lithuania in 2018. During his papal visits, the pope always visits with prisoners and correctional ministries. In Galveston-Houston, the Office of Correctional Ministries of the Archdiocese works to extend God's mercy to those incarcerated. (CNS photo)

HOUSTON — Men and women newly released from incarceration, if left unaided, could eventually return to a life of violence and crime on the streets to survive, possibly even returning to prison. By providing the compassionate love of Christ through a “hand up” approach instead of giving them a “hand out,” they can make a better transition back into society and lead productive lives as citizens.

Through the efforts of clergy, staff and lay volunteers at three transitional living facilities operated by the Office of Correctional Ministries, Catholic men released from correctional institutions are offered housing and other services to help them successfully make that transition. This includes spiritual guidance, employment opportunities, clothing, city transportation, family reunification, healthcare, victim mediation and other useful tools.

The office is one of 60 ministries supported by the Diocesan Services Fund (DSF).

According to Father Ron Cloutier, who has overseen the Office of Correctional Ministries for close to 30 years, the transitional housing program is committed to reducing prison/jail recidivism through a comprehensive, structured program that addresses the issues of each client that walks through the door.

“The national rate of recidivism in our country, or those ex-offenders who return to prison, is 56%,” Father Cloutier said. “The rate of recidivism for those in our three halfway houses is only 7%, so we know that halfway houses are successful! We could use about 100 more such houses, but they are hard to set up, difficult to run and extremely hard to finance, but they are worth it.”

Father Cloutier said he believes these efforts are a part of the overall mission of the Office of Correctional Ministries, which is the Church’s response to tending to the spiritual needs of those who are in jails and prisons, or who have been victimized by crime and violence. He said by offering God’s presence, the Church, through Correctional Ministries, is a reminder that faith can be renewed through reconciliation. He said over the past 10 years, great emphasis has been placed on the development of transitional housing for ex-offenders.

Father Cloutier said one of the ministry’s greatest assets is the committed volunteers that spend many hours each week, each serving the inmates and ex-offenders in the correctional facilities and transition houses. He said while it is often challenging to recruit volunteers for this ministry, once they come on board, they do not leave.

“Most of our volunteers have been with us for many years,” said Father Cloutier. “They see the enormous need, the warm reception they receive from the inmates, the very sincere confessions, and the genuine desire of the inmates to hear and celebrate the Good News of God’s extraordinary love.”

He said of the approximate 60,000 men and women imprisoned within correctional facilities in the Archdiocese, around 20 to 25% declare themselves as Roman Catholic. He said of the nearly 51 prisons/jails in the Archdiocese in which they serve, 24 are state prisons, 10 are county jails, and the rest are immigration centers, private jails, federal jails and local lockups.

Another key program offered through the Office of Correctional Ministries is a Catholic retreat held in state prisons by the Kolbe Prison Ministries. These three-day Kolbe Retreats continue to gain in popularity since their inception almost four years ago and are designed to help enrich and reinvigorate the spiritual lives of 80 prison inmates at a time. After each retreat, follow-up classes and meetings of instruction are offered to participants to continue the understanding of conversion and the Catholic faith.

Father Cloutier said the Office of Correctional Ministries has recently been a part of major societal changes in both Harris County and the state of Texas.

“Jurors now can now impose a sentence of life without parole instead of the death penalty in capital murder cases,” said Father Cloutier. “Consequently, death penalty issuances have dropped dramatically in the last two years; Harris County is no longer the death penalty capital of the country. As far as jail bond reform, nonviolent misdemeanors are now eligible for personal recognizance bonds, which has resulted in a dramatic lowering of the jail population.”

As a ministry supported by the DSF, Father Cloutier said he believes it is crucial for the faithful in the Archdiocese to support the annual campaign.

“DSF plays a major role in staffing, paying stipends to priests offering the Eucharist in our jails and prisons, and Bible purchases,” he said. “Since DSF covers nearly 50% of our expenses, it’s impossible to think of Correctional Ministries without DSF support. All of our programs and services are most important because lives are being reconciled to God, the Church and individual families through our efforts.”

Examples of the ministry’s impact on a volunteer and former inmate follow in their own words.

“I witnessed women who made complete turnarounds,” said Martha “T.” “In fact, a few weeks ago while eating at my local Luby’s Cafeteria, a young woman came to see me, and it was one of the women I ministered to at the jail! She recounted how instrumental our ministry was to her conversion.”

“I want to say, Thank You!” said newly released inmate, Jennifer “R.” “Having Communion brought to me every week while I was in the Harris Co. Jail gave me hope and strength to return to my parish when I was released. God has been merciful to me — thank you, Catholic volunteers!”