Mural remains an icon of fight against racism 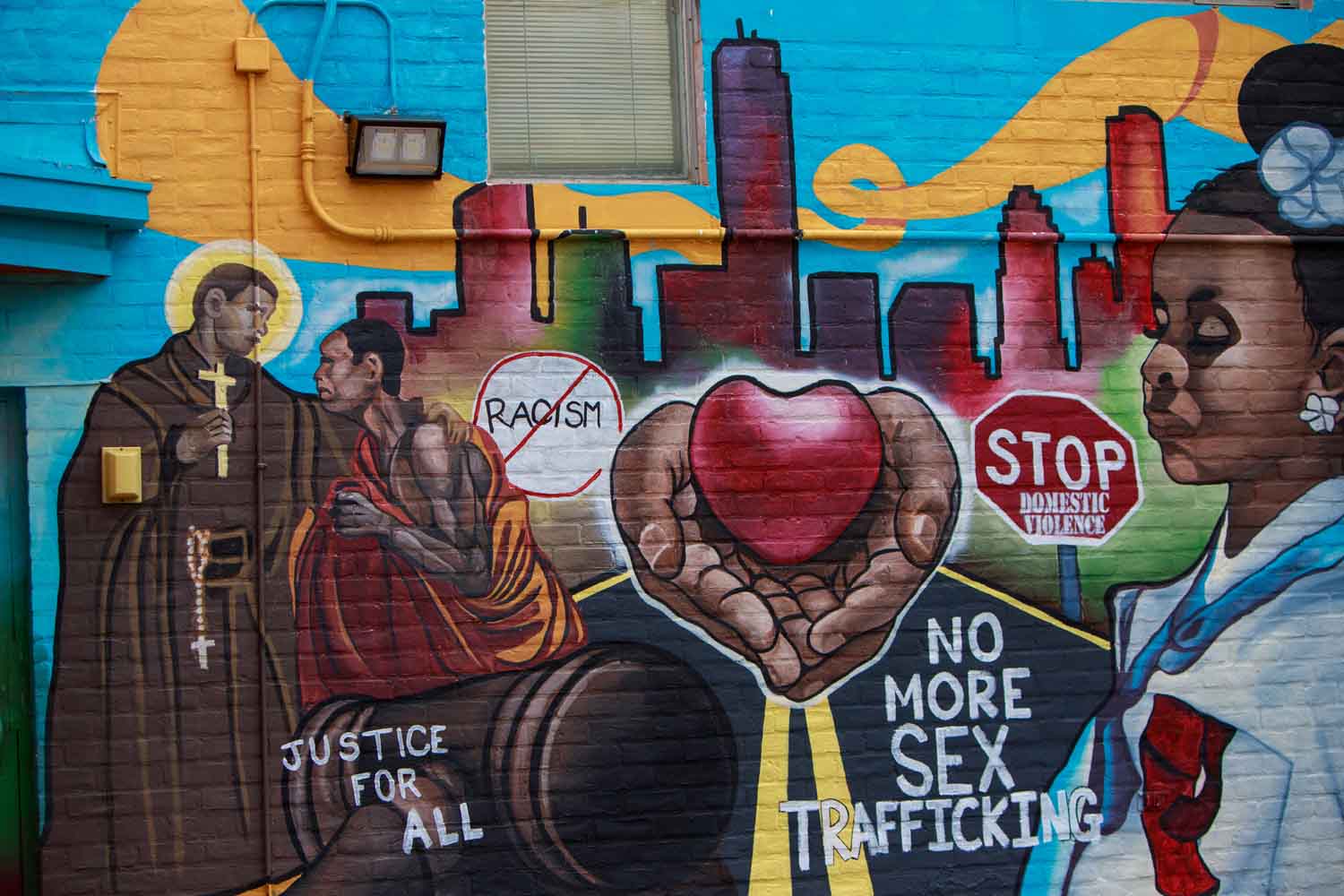 A large mural sponsored by the Knights of Peter Claver and Ladies Auxiliary is seen on the wall of the Catholic Newman Center at Texas Southern University in Houston. Some 120 youth helped paint the mural, as well as the art wall, nearby. The mural has drawn attention as demonstrations rocked the nation. (Photo by James Ramos/Herald)

HOUSTON — Even as dark clouds rained on demonstrations and protests that moved through the Third Ward, a colorful mural at the Catholic Newman Center at Texas Southern University stood as a bright icon of hope calling for an end to all racism and prejudice.

Inspired by the U.S. bishops pastoral letter against racism, “Open Wide Our Hearts: The Enduring Call to Love,” the mural drew onlookers walking by during marches remembering the life of Houston-native George Floyd, who grew up in the Third Ward community. Protests and prayer vigils continued nationwide after a white police officer in Minneapolis, Minnesota, was filmed pressing his knee into the neck of Floyd, an African American, who died at the scene. Floyd, 46, was arrested May 25 on suspicion of forgery.

Houston artist Victor Gaddie created and painted the mural with the assistance of more than 120 Black Catholic teens last July during the Junior National Convention of the Knights of Peter Claver in Houston. Youth from across the nation helped paint the mural and a nearby art wall. The mural features a colorful interpretation of the Houston skyline, as well as symbols of a red heart in open hands, a road, a young girl, a dove and the message “Open Wide Our Hearts: The Enduring Call to Love,” the title of the U.S. bishops letter against racism. A gavel is seen beneath the words “justice for all.”

Following the death of Floyd, Cardinal DiNardo expressed his pastoral concern and prayers for Floyd’s family, especially because Floyd was from Houston.

“I speak my own sorrow for his death,” Cardinal DiNardo said May 27. He called for “the renewal of action that leads to the end of racism. This reality still lingers in our society today, even in Houston. We must continue to work to end this scourge on society.”

Other Texas bishops with the Texas Catholic Conference of Bishops echoed Cardinal DiNardo’s message. They recalled the pastoral letter and said, “the injustice and harm racism causes are an attack on the dignity of human life. We pray for the Holy Spirit’s guidance … in order to work toward a society where justice, peace, and charity may be shared with all of God’s children.”

‘Let your name be remembered’

KPCLA officials condemned “the senseless death of George Floyd at the hands of Minneapolis policemen” in a May 29 statement. There is no explanation for the actions police took that ultimately ended in Floyd’s “demise,” the statement said.

The message repeatedly named Floyd, calling him “a man, a human, a being. Not a stat. Not just another one. Not to be forgotten.” They echoed “outrage and demands” for justice and true respect for the dignity of Black lives. They also called for effective solutions that will not just penalize but stop “murderous actions.”

“The ink has run dry on writing statements,” it is now time to write laws, policies and sentences, they said. “George Floyd, let your name be remembered as the murder that sparked effective change.”

Gomez: Killing of Floyd is a ‘sin that cries out to heaven for justice’

Floyd’s death “was senseless and brutal, a sin that cries out to heaven for justice,” and protests taking place nationwide “reflect the justified frustration and anger” of millions of Americans who today suffer because of racism, said Los Angeles Archbishop Jose H. Gomez, president of the U.S. Conference of Catholic Bishops.

“Nothing is gained by violence, and so much is lost. Let us keep our eyes on the prize of true and lasting change.” What the Rev. Martin Luther King Jr. said is “true ... that riots are the language of the unheard,” the archbishop continued. “We should be doing a lot of listening right now. This time, we should not fail to hear what people are saying through their pain. We need to finally root out the racial injustice that still infects too many areas of American society.”

In a message to students, Xavier University of Louisiana President Reynold Verret encouraged them to “struggle as we must for real change.” Reynolds leads the nation’s only historically Black Catholic university located in New Orleans.

“We know that injustice persists but have faith that it cannot last,” he said. “Let us not be misled by those who urge us to destroy. Let us act for justice, walk prudently focusing righteous anger and pain toward right action, always honoring the memories of the sisters and brothers we lost.”

Verret said the students’ “minds and hearts are gifts” and are their best instruments in taking on the call to “build the more just and humane world.”

“We act on behalf of our dead and out of love and fidelity to the young ones for a better world for all,” he said.

To read the U.S. bishops pastoral letter on racism and for more resources, visit www.usccb.org/racism.