Mapping with the stars: Nuns instrumental in Vatican celestial survey 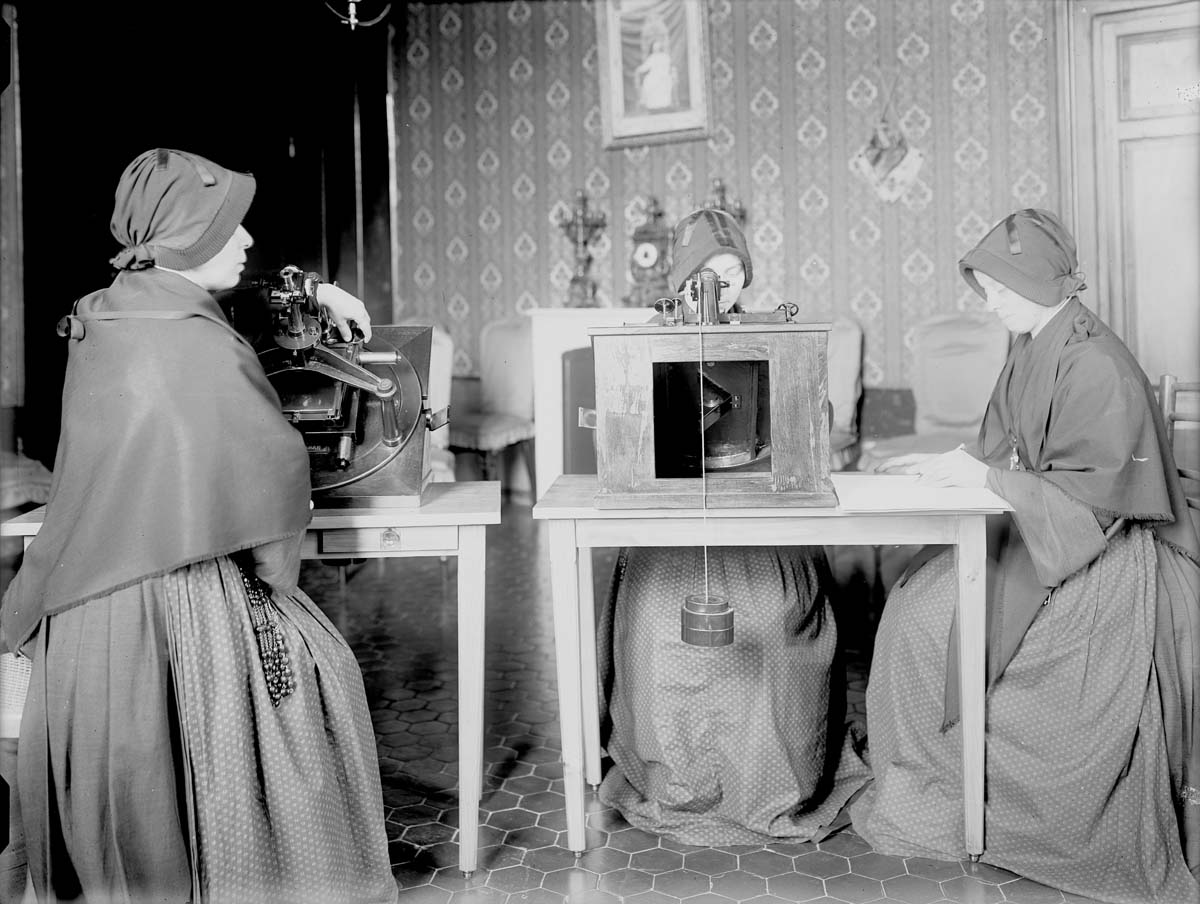 Members of the Sisters of the Holy Child Mary use microscopes to review glass plates as they measure star positions for a collaborative photography project the Vatican participated in to catalogue the stars and create a photographic map of the heavens. At right, a member of the order records star coordinates in a ledger. Sisters Emilia Ponzoni, Regina Colombo, Concetta Finardi and Luigia Panceri worked on recording star coordinates from glass plates between 1910 and 1921. (Photo courtesy of Vatican Observatory).

VATICAN CITY (CNS) -- Of the many momentous or menial tasks women religious perform, one of the better-kept secrets has been the role of four Sisters of the Holy Child Mary who were part of a global effort to make a complete map and catalog of the starry skies.

Up until recently, the women were no more than nameless nuns whose image has long been preserved in a black and white photograph that showed them wearing impeccably ironed habits and leaning over special microscopes and a ledger.

But now their identities have been pulled out of obscurity by Jesuit Father Sabino Maffeo, assistant to the director of the Vatican Observatory. He stumbled onto their names as he was going through the observatory archives, "putting papers in order," he told Catholic News Service in 2016.

Sisters Emilia Ponzoni, Regina Colombo, Concetta Finardi and Luigia Panceri, all born in the late 1800s and from the northern Lombardy region near Milan, helped map and catalog nearly half a million stars for the Vatican's part in an international survey of the night sky.

Top astronomers from around the world met in Paris in 1887 and again in 1889 to coordinate the creation of a photographic "Celestial Map" ("Carte du Ciel") and an "astrographic" catalog pinpointing the stars' positions.
Italian astronomer and meteorologist, Barnabite Father Francesco Denza, easily convinced Pope Leo XIII to let the Holy See take part in the initiative, which assigned participating observatories a specific slice of the sky to photograph, map and catalog.

Father Maffeo, an expert in the observatory's history and its archivist, said Pope Leo saw the Vatican's participation as a way to show the world that "the church supported science" and "was not just concerned with theology and religion."
The Vatican was one of about 18 observatories that spent the next several decades taking thousands of glass-plate photographs with their telescopes and cataloging data for the massive project.

But the project at the Vatican Observatory began to suffer after Father Denza died in 1894.

When Pope Pius X found out the new director wasn't up to the job, he called on Archbishop Pietro Maffi of Pisa to reorganize the observatory and search for the best replacement, Father Maffeo said.

In 1906, the archbishop found his man at Georgetown University in Washington D.C. -- Jesuit Father John Hagen who had been heading its observatory there since 1888 and was renowned for his research on "variable" stars, which have fluctuating brightness.

Though he had extensive experience in astronomy, Father Hagen never did the kind of measurements and number crunching required for the astrographic catalog, Father Maffeo said.

"So he went to Europe to see how they did it and saw that in some observatories there were women who read the (star) positions and wrote them in a book with precise coordinates," the 93-year-old Jesuit priest said.

The astronomers told Father Hagen that once the young women "were shown how to do it, they were very diligent," Father Maffeo said. At the Royal Observatory in Greenwich, for example, they even were referred to as "lady computers" because of the skill needed to calculate the coordinates according to set formulae.

When Father Hagen wondered where he might be able to hire young women for the Vatican, "he immediately thought -- nuns," and contacted the Sisters of the Holy Child Mary, who were located nearby, Father Maffeo said. Coincidentally, Mary is often symbolized in Catholic Church tradition by a star.

In a letter dated July 13, 1909, to the superior general, Mother Angela Ghezzi, Archbishop Maffi said the Vatican Observatory "needs two sisters with normal vision, patience and a predisposition for methodical and mechanical work."

Father Maffeo said the sisters' general council was not enthused "about wasting two nuns on a job that had nothing to do with charity." However, Mother Ghezzi was "used to seeing God's will in every request," he said, and she let two sisters go to the observatory.

Work for the sisters began in 1910, but soon required a third and later a fourth nun to join the team. Two would sit in front of a microscope mounted on an inclined plane with a light shining under the plate-glass photograph of one section of the night sky.

The plates were overlaid with numbered grids and the sisters would measure and read out loud each star's location on two axes and another would register the coordinates in a ledger. They would also check enlarged versions of the images on paper.

The Vatican was one of about 10 observatories to complete its assigned slice of the sky. From 1910 to 1921, the nuns surveyed the brightness and positions of 481,215 stars off of hundreds of glass plates.

Their painstaking work did not go unnoticed at the time. Pope Benedict XV received them in a private audience in 1920 and gave them a gold chalice, Father Maffeo said. Pope Pius XI also received the "measuring nuns" eight years later, awarding them a silver medal.

The Vatican's astrographic catalog, which totaled 10 volumes, gave special mention to the sisters, noting their "alacrity and diligence," uninterrupted labors and "zeal greater than any eulogy" could express at a task "so foreign to their mission."

The international project to catalog star positions and build a celestial map ended in 1966 and recorded nearly 5 million stars. The catalog consists of more than 200 volumes produced by 20 observatories and the unfinished map is made up of hundreds of sheets of paper -- all work culled from more than 22,000 glass photographic plates of the sky.
Father Maffeo said, "Never before had there been a presentation of the stars as vast as this."

While the project was quickly eclipsed by huge technological developments in surveying stars, modern-day scientists eventually discovered that comparing the star positions recorded a century earlier with current satellite positions provided valuable information about star motions for millions of stars.

The project showed that even in a new era of satellites and software, quaint glass-plate photographs and "lady computers" weren't wholly obsolete.