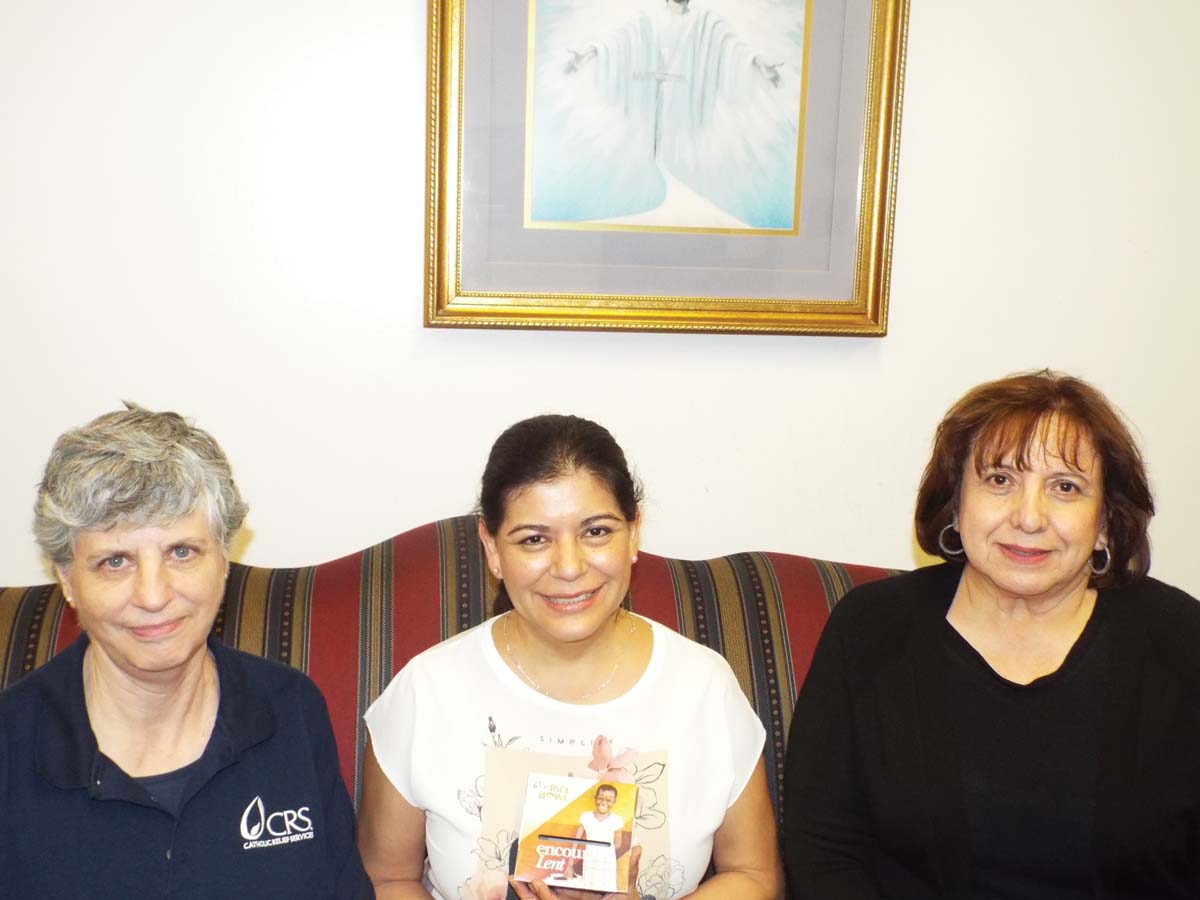 These past three years of devastating drought in Central America have destroyed crops of corn and beans, leaving families starving and causing Guatemala to declare a state of emergency, said Catholic Relief Services officials.

They are asking parishes to participate in its Lenten Rice Bowl campaign to raise funds for the “poorest of the poor,” said Monica Rodriguez, a Guatemalan project manager of CRS’ SEGAMIL, a program that trains women how to earn funds and provide nutritious food for their children.

Rodriguez, accompanied by CRS colleague Anna Huth and Archdiocesan Director of Mission Office Hilda Ochoa, recently visited several Houston parishes and schools in the Archdiocese. She thanked them for past participation and encouraged them to start a new Lenten project through the Rice Bowl campaign whether individually, classes or Church-wide.

“This project really makes a difference. We are partners in change,” she said.

75 percent of all funds go directly to cutting the cycle of poverty while each diocese retains the remaining 25 percent to distribute to parishes for their own programs to help the poor.

Locally, Ochoa explained the Mission Office forwards 75 percent of Rice Bowl funds collected to CRS and retains 25 percent that they disburse through grants to those Rice Bowl participants of parishes and schools who request them.

According to the World Food Programme, nearly 50 percent of children under five years old are considered chronically malnourished in Guatemala, a measure that peaks to 90 percent or higher in many rural areas.

Johana Ferro, director of religious education at St. Jerome Catholic Church, said her faith formation classes have been able to raise thousands of dollars over the past 10 years for the Rice Bowl project. Ferro orders the free materials from crsricebowl.org, which includes cardborad bowls that children use as banks.

“ In classes, we also go over the activities offered online for the family like healthy recipes and the Lenten prayer,” Ferro said. They can also view videos on the website of families benefiting from the program to bring it closer to students’ reality.

“Basically our teachers help children learn that religion is not just a church or building, but it’s our responsibility to help our neighbors,” she said. Her classes and St. Jerome have raised $11,000 submitted for the Lenten Rice Bowl project.

“Every penny can make a difference. When we’re hungry, we can go out and buy a hamburger, but in many places in the world, they have to produce their own food or starve,” Ferro said.

Barbara Adams, of St. Justin Martyr Catholic Church’s social ministry program, said over the past 11 years, parishioners have raised $34,000 for the Rice Bowl project. After submitting the funds to the Mission Office, she then has applied for grants to help those in need in Houston pay for utilities or rent.

In the winter, the ministry focuses on clothing the homeless

Adams met Rodriguez, originally from Guatemala, when they attended Rice Bowl training at St. Dominic Chancery recently. Rodriguez received her master’s degree in the U.S. on world hunger, malnutrition and development before returning to Guatemala and joining CRS 12 years ago.

U.S. Customs and Border Patrol data show a massive increase in the number of Guatemalan migrants, particularly families and unaccompanied minors, intercepted at the U.S. border over the past few years. Rodriguez said it’s not a coincidence that the leap coincides with the onset of severe El Niño-related drought conditions in Central America’s dry corridor, which stretches through Guatemala, Honduras and El Salvador.

One of the main “push factors” identified in addition to violence from crime, includes drought and its consequences: no work, no money and no food. Years of erratic weather, failed harvests and a chronic lack of employment opportunities have slowly chipped away at the strategies Guatemalan families have used successfully to cope with one or two years of successive droughts and crop failures, she said.

Now entire villages seem to be collapsing from the inside out as more and more communities become stranded, hours away from the nearest town, with no food, no work and no way to seek help. The desperation is palpable, Rodriguez said.

One program she does is a savings and lending committee that women in the village organize to set aside even a few cents each week that they can then borrow and pay back as needed, Rodriguez said.

They also are trained in animal production, she said. So with those funds saved or borrowed, a family can buy a chicken for the eggs that they can eat and sell. “They are starting micro-enterprises,” Rodriguez said. “Many Mayan women are not allowed credit through banks, so we are helping them start their own small businesses to survive.”

Rodriguez helps more than 150,000 people within her region. Rice Bowl funds also go to Africa and other areas in need, she said.

Every year, people in more than 14,000 faith communities across the country are using nearly four million “rice bowls” for their Lenten almsgiving, resulting in roughly $12 million annually. While $9 million supports CRS programs around the world, the remaining $3 million stays in the local diocese to support hunger and poverty alleviation effort.