HOUSTON — As modern disciples, like the first two brothers who were fisherman in the Sea of Galilee who left their nets to follow Jesus, Christians are called to be fishers of men and woman, including those who work on ships and enter ports around the world. 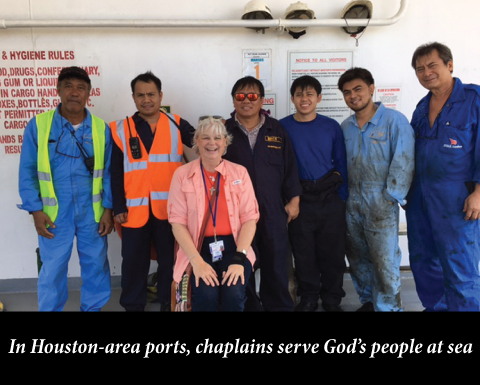 The Apostleship of the Sea is the Catholic Church’s worldwide ministry to God’s “People of the Sea,” including seafarers, fishers, their families, dock workers, maritime cadets, security personnel, truck drivers and other workers in the maritime industry. The Archdiocese has had a continuous ministry to the People of the Sea since the 1800s when the first pastors on Galveston Island ministered to the crews on board the ships that docked in the Port of Galveston.

Currently, the Archdiocese’s Apostleship of the Sea (AOS), or Port Chaplaincy, is responsible for the sacramental and pastoral care of the Catholic seafarers from around the world who enter the ports in Galveston, Barbour’s Cut, Texas City and Port of Houston. Last year alone, AOS chaplains visited 6,300 ships that entered these ports, which amounts to ministering to approximately 140,000 seafarers.

The AOS is one of 60 ministries supported by the Diocesan Services Fund (DSF), and is one of several interfaith ministries located at the centers, working alongside Baptist, Lutheran, Methodist, Episcopal, Presbyterians and other non-denominational chaplains and the Board of Directors to manage and operate the facilities.

Per Karen Parsons, OFS, who has been the chaplain at the ports in Texas City and Galveston, as well as nearby fishing villages for close to 25 years, said many people in the Archdiocese may not realize that hundreds of thousands of seafarers and fishers who come to these ports are Catholic. The DSF helps provide for the staffing of all full-time chaplains at the Port of Houston; Father Jan Kubisa, who has been with the AOS ministry since 2004; and Father Carlos de la Torre and Deacon Allan Frederiksen, who joined the ministry in 2014; and Parsons. Deacon Heath Hampton and Deacon Stan Avelone serve at the Port of Houston as volunteers.

The DSF also provides funds for AOS operating expenses and continuing education for the chaplains and personnel since the industry is always changing and they must remain updated on an annual basis.

“For Catholic seafarers/fishers, the chaplains hear confessions, the chaplain priests celebrate Mass on board the ships and in the Houston Seafarers Center chapel, and the deacons and lay ecclesial chaplains hold communion services,” said Parsons. “We all bless vessels and seafarers and fishers, including on Ash Wednesday when we carry ashes to the docks to distribute to all who wish to receive. At Christmas, we bring gifts donated by area churches, school groups, families and civic groups to give to all seafarers and fishers.”

Parsons said when a seafarer or fisher finds him or herself in the hospital, either through illness or injury, the chaplains will visit them and serve as their family advocates while they are here. She said whenever there is a dire situation on board, the chaplains also serve as advocates in helping resolve the problems.

“The trends and needs of the seafarers and fishers change as the shipping and fishing industry change,” Parsons said. “We must keep up with the new rules, laws and regulations, so we attend annual conferences and seminars to be able to learn more and serve the seafarers and fishers better. Whenever a bill comes before Congress that threatens to harm seafarers or fishers, we enlist in a calling and letter writing campaign to help our lawmakers be aware of the lives that will be affected if they vote on a bad law, and have been very successful in our efforts.”

Parsons said she witnessed a time in 2016 when many shrimpers and oystermen in Galveston Bay were hurting financially due to the heavy rains during the year. The influx of fresh water into the bay caused many of the shrimp and oysters to die. Those who made their living on the bay found themselves in dire financial trouble.

Parsons said a young shrimp boat captain, John Norgan, needed help when his shrimp boat took on water and his batteries were flooded. He couldn’t go out and make a living if he couldn’t move his boat.

“I was able to use my emergency funds to help Captain John get new batteries,” said Parsons. “He is also a single father of two beautiful little girls, so I was able to bring them a bag of stuffed animals someone had donated.”

In a letter to Parsons, Norgan wrote that he teared up from the amount of care and support he and his daughters received from her and the AOS. Norgan said he can’t stop thanking Parsons enough for the help she gave, even when they were strangers. He appreciated how she stayed by his and his daughters’ sides throughout the ordeal.

“(Chaplain Karen) is a true blessing from God,” Norgan said. “She has even given me food for my girls and a Christmas gift for each of them. I’ve been down and out with many problems, but have been able to keep my head up with Chaplain Karen’s motivational talks and to keep faith in God.”