In addition to the Sacraments, a ‘plenitude’ of grace still available, Texas Medican Center-area priest says 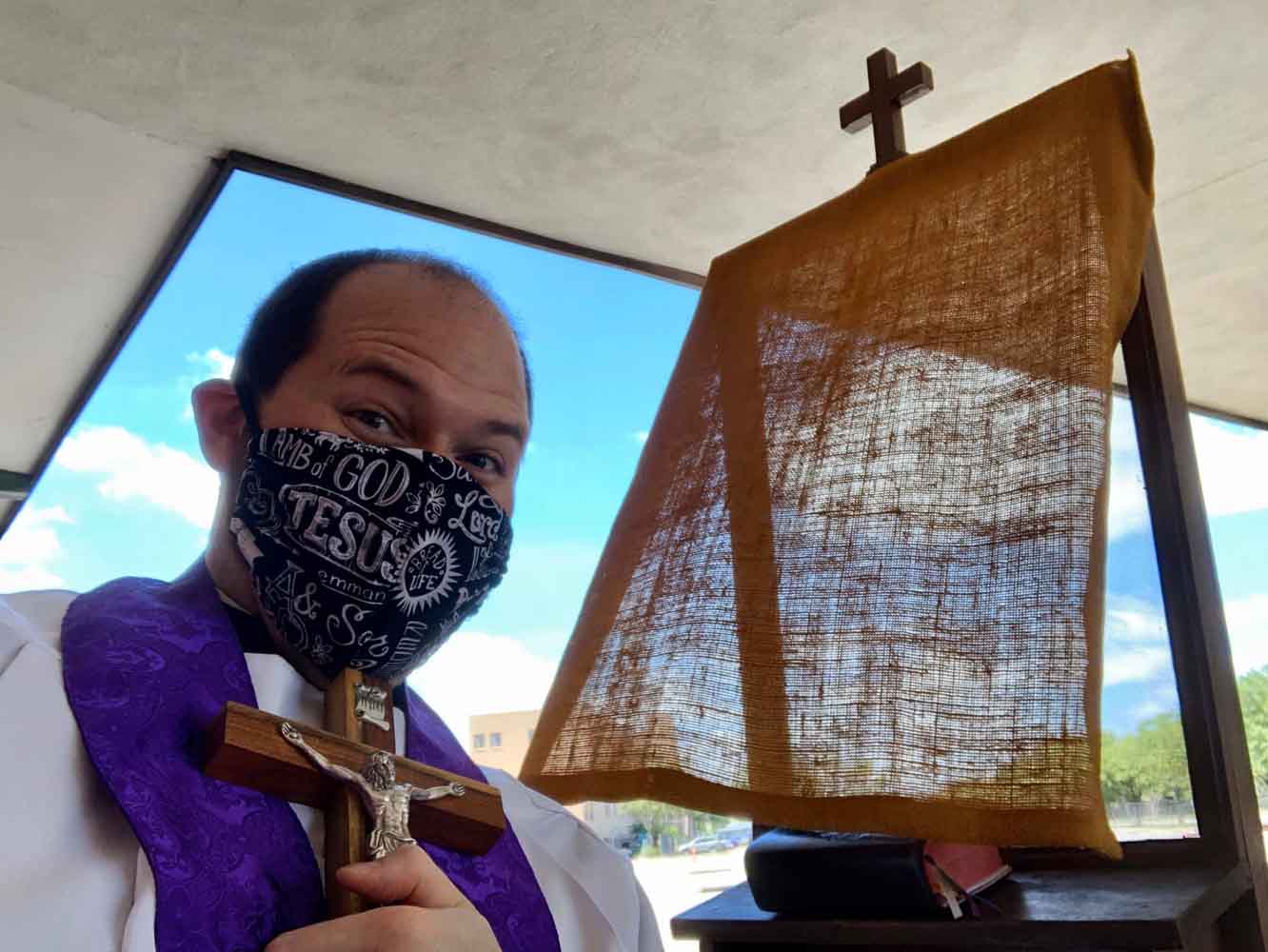 Father David Hust, seen here holding his crucifix while waiting for penitents at his make-shift outdoor confessional, has been hearing confessions during the pandemic, as have other priests in the Archdiocese. (Photo courtesy of Father David Hust)

Recognizing that most routines have been disrupted, the parochial vicar set up a drive-through confessional in the church parking lot.

While the reception of Communion has been delayed “to love our neighbors,” people still need God’s grace, maybe now more than ever,” he said. “People need the tremendous fiery love of God rekindled within them… not only to warm their own hearts but also so they may be what all baptized Christians are called to be, lights shining in the darkness.”

Wearing a face mask and waiting behind a veiled screen, Father Hust greeted penitents who remained in their cars, encouraging them to be “blunt” and loud with their confession. Social distancing ensured confession could remain private and anonymous as needed.

“We, priests included, are utterly helpless without the grace of God,” he said. “We need the great gift of the Sacrament of Reconciliation, and we need to make it exceedingly accessible so that people can draw from the rich treasury of grace to be had in the life of prayer.”

With a “steady stream of people repenting, coming back to the Lord and receiving His merciful love,” Father Hust said, “it’s been beautiful to see God at work, and beautifully humbling to be a part of it.”

Knowing that so many Catholics “feel abandoned or that God isn’t present to them because they can’t receive the Eucharist sacramentally… (and that) the devil is wreaking havoc in hearts,” is a weight that “grieves my fatherly heart,” Father Hust said.

He implored the faithful to remain in spiritual communion with Jesus Christ, each other and the Church.
“The Council of Trent teaches us that the Eucharist can be received spiritually. That’s a big deal,” he said. “People need to know this and to make these acts of spiritual communion daily and repeatedly.”

He assured his parishioners that God remains with them even at this time.

“God is there for them and desires to address the thoughts, feelings and desires of their hearts,” he said. “The key is to make the time for mental prayer and the push through the discomfort of its newness, trusting that God is there and desires to lovingly minister to them.”

“My fatherly heart desires to ensure all have access even if that looks different to that which we’ve all grown comfortably accustomed.”

Father Hust had a message from him and his brother priests for the faithful to know.

“We are praying, praying the Most Holy Sacrifice of the Mass for you, for your intentions, out of love for you, and imploring the Heavenly Father to have mercy on us and on the whole world,” he said. “We are working incessantly to try to figure out how to be there for you and care for you… (We) are praying; we, too, are begging God’s forgiveness; we are striving to surrender every bit of ourselves to God so that we may be consumed by Him and transformed by Him into the fathers He wants us to be, fathers who will love His people the way He loves His people, to death, so you may know His love.”

HOUSTON — A Houston-area deacon, active for 21 years, passed away peacefully at his home March 28, not of the coronavirus, but the pandemic had some of his family only able view the graveside services via livestreaming.

Deacon Kenneth Martin of Spring, who had served St. Edward Catholic Church for decades and was also the director for the Archdiocesan Clergy Pastoral Outreach Ministry for several years, had been ill before the spread of the virus and his wife Mary Ann requested he come home for hospice care.

After only a few days at home, Mary Ann said she held his hand as he passed away 20 minutes past midnight on Saturday, March 28, with other family present. But one of their three sons lives in Canada.
She informed Father Christian Bui, pastor at St. Edward, who asked permission to livestream the graveside service at Klein Memorial Park in Tomball.

“Our pastor Father Bui wanted to livestream the graveside service specifically for our son in Canada who could not be here due to coronavirus travel restrictions, as well as for the many other family, friends and parishioners who loved and respected Ken for his life and his 21 years of active ministry as a deacon,” she said.