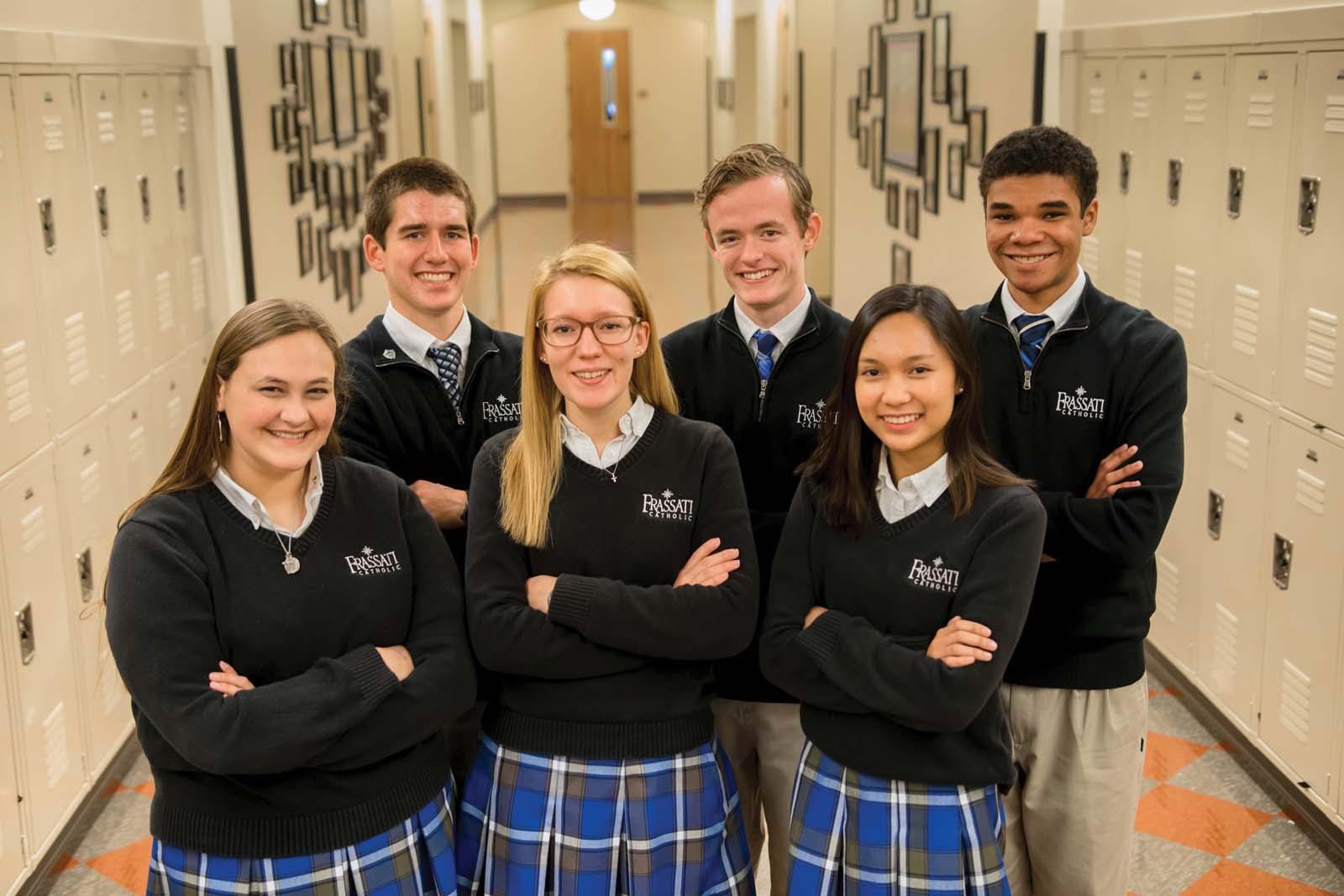 SPRING — There is nothing quite like the feeling of accomplishment — in small and great matters. The administration, teachers and students at Frassati Catholic High School in Spring will revel in the culmination of several school-wide accomplishments with their first-ever graduating class in 2017.

Frassati Catholic will graduate 43 seniors on May 19 with much pride and admiration for those students who have led the way. Principal Sister John Paul, O.P., said, as a class, these first graduates have contributed to creating an amazing culture in the school and their presence will be missed.

“It is difficult for me to imagine Frassati Catholic without them,” Sister John Paul said. “Our first graduates are impressive young people who come from strong, faith-filled families. When asked about their experience here, they consistently refer to the family-like atmosphere of the school.”

Sister John Paul said these students are respectful of one another, support one another and find the good in every challenge.

“As a new school we have limited resources, but our students have never complained or exhibited an attitude of entitlement which is so prevalent in our culture,” she said. “They simply rolled up their sleeves and did whatever they could to make up for the lack.”

Students like Joseph O’Neill have helped shape the culture at Frassati Catholic. O’Neill was a founding student in 2013 when the school opened.

“It is pretty surreal knowing that I was able to help found a high school,” O’Neill said. “I said yes to the school when there was no actual building, and I’ve seen it built into two large buildings with many more to come. To know that I’ve helped make the school what it is today is something I’m very proud of.”

In October 2010, the Dominican Sisters of the St. Cecilia Congregation, from Nashville, Tenn., accepted the invitation of Daniel Cardinal DiNardo to be administrators of the school. In August 2011, Sister John Paul, Sister Anna Laura and Sister Mary Albert moved to Spring to work with the Board of Trustees to help establish Frassati Catholic.

“It has been a tremendous honor and privilege for us to work with the board members, local pastors, countless volunteers, parents and students,” Sister John Paul said. “Frassati Catholic opened because of the support of the entire community, particularly the Catholic community, of north Houston.”

Frassati Catholic opened to its first freshman class on Aug. 22, 2013. Sister John Paul said the namesake of the school, Blessed Pier Giorgio Frassati, has inspired the school’s mission in every way.

“Our entire school program is designed to illustrate the life of Pier Giorgio Frassati,” Sister John Paul said. “We look at everything through the lens of five outstanding characteristics lived by Pier Giorgio during his life: zealous student, virtuous athlete, servant of the poor, witness of holiness and true friend. All of our programs fit under one of these characteristics.”

O’Neill said the most interesting thing that he has learned about Blessed Pier Giorgio is how he led his friends to Mass.

“He would often bet his friends that if he won a game or a challenge they would have to go to Mass with him,” O’Neill said. “I found this deeply inspiring because he was so convicted in his faith that he was able to bring his friends to the source and summit of Catholic life, the Eucharist.”

Senior Hannah Hoskins, who is struck by Blessed Pier Giorgio’s obedience to his parents and God’s will, said she is grateful for the influence of leadership of the Nashville Dominicans.

“Jesus Christ is truly present at our school,” Hoskins said. “There is so much wisdom, knowledge and virtue that flows from the school that will stay with me forever. Anything I do in the future, whether that be writing, serving as a youth minister, etc., is due to the foundation Frassati Catholic gave me in my high school career.”

Hoskins, this year, won first place overall in the University of St. Thomas Archdiocese of Galveston-Houston Essay Contest. She plans to attend Texas A&M University and major in English and possibly study special education. Her younger sister, Mallory, is also currently a freshman at Frassati Catholic.

O’Neill has a younger brother, Christopher, who will join the Frassatic Catholic family as a freshman in spring 2017. O’Neill plans to volunteer as an EMT-Basic with a 911 service this summer and will attend Texas A&M University at Blinn College as a part of the Blinn TEAM program. He also plans to join the Corps of Cadets with the hope of receiving a commission with the United States Marine Corps as an Infantry Officer.

O’Neill and Hoskins are only two of the 43 graduates who will complete their time at Frassati Catholic at 6:30 p.m. on Friday, May 19 in the Frassatic Catholic gymnasium. The Baccalaureate Mass is at 10 a.m. May 19 in the gym with Auxiliary Bishop George A. Sheltz as the celebrant and Father Tom Rafferty, pastor of St. Anthony of Padua Catholic Church, as the homilist.

Learn more about the 2017 Frassati Catholic graduating class at frassaticatholic.org/classof2017.