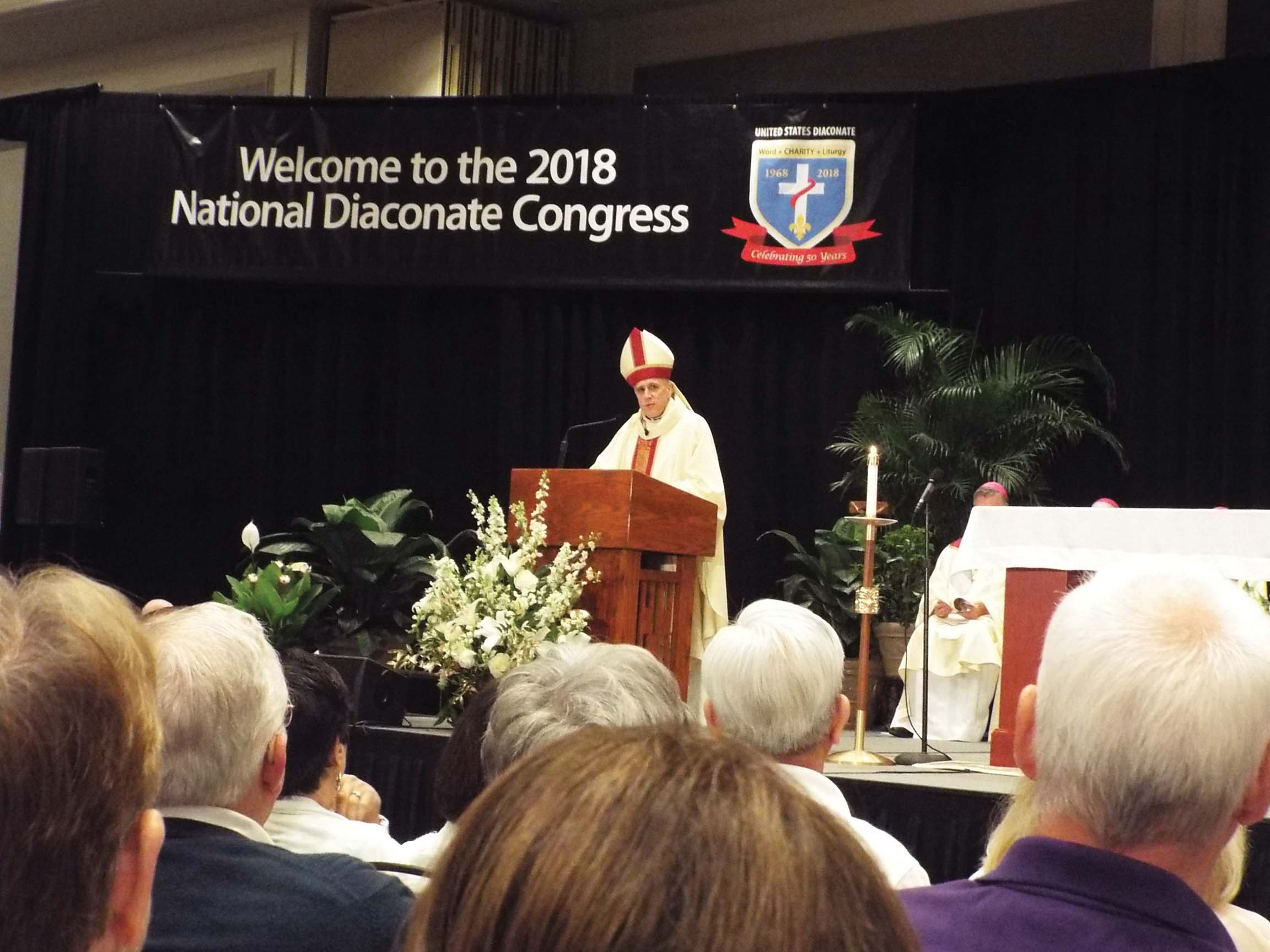 More than 2,000 deacons and their wives from around the U.S. listen to Daniel Cardinal DiNardo at the National Diaconate Congress in New Orleans July 26. Photo by Jo Ann Zuñiga/Herald.

NEW ORLEANS — More than 2,000 deacons and their wives from around the U.S. gave a standing ovation to Daniel Cardinal DiNardo at the National Diaconate Congress as he congratulated them on the 50th anniversary of the restoration of the diaconate, urging them to be “emissaries” of service to priests, their churches and the vulnerable of their communities.

Permanent deacons, who are ordained clergy able to marry, can be blessed with all seven Sacraments from Baptism, Eucharist, Confirmation, Reconciliation, Anointing of the Sick, Matrimony and Holy Orders. Their duties include baptizing, presiding over funeral vigils and marrying couples, but they may also have hospital, prison or other specialized ministries.

“Not all people understand the importance of permanent deacons. They are a bridge between the priests and bishops and the people of God,” Cardinal DiNardo told the crowd in New Orleans July 26 attending the Congress.
The event, with the theme “Christ the Servant: Yesterday, Today and Forever,” was organized by the National Association of Diaconate Directors (NADD) in conjunction with the U.S. Conference of Catholic Bishops.

During his speech, Cardinal DiNardo told them that some Catholic churches in Houston have up to 8,500 families with only two priests and seven deacons.

“Most priests do not see deacons as intrusions. They need them,” he said. “We also do not want deacons to be considered a luxury for wealthy churches who can afford to help pay for formation.”

It was in 1968, as part of the reforms from the Second Vatican Council, when the bishops called for the restoration of permanent deacons in the Church. Previously, the diaconate as a permanent order had gone into decline in the fourth century, diminishing until the Middle Ages when it was reduced to an exclusively transitional order of ministry on the path to priesthood.

To show the varying roles of permanent deacons in the church, Cardinal DiNardo compared what they now do during the dedication ceremony of a church building, to make sacred the new structure.

“God’s holy people are present. We sprinkle and anoint the altars. And the deacon reads and proclaims the Gospel, which is about Jesus cleansing the temple,” he said.

“Brothers, you are in the Temple of God’s body. It’s serious business, but also very joyful. Practice proclaiming the Word and I ask the wives of deacons in their own special way to help them.”

Also as part of the dedication ceremony, deacons take the huge braziers of incense and travel around incensing the entire church and the people. The bishop also hands the Paschal candle symbolizing the light of Christ to the deacons to light the other candles on the altar. The church, which had been dim throughout the ceremony, turns on all the lights in a blaze of illumination to complete the dedication of the house of prayer and the parishioners celebrate, many with tears of joy.

“I’m begging you to stay alert to your call to holiness. You need to be holy to be a permanent deacon. That is true for all of us Christians, but even more for deacons as leaders of the Church,” Cardinal DiNardo said.

He urged them to go beyond praying Liturgy of the Hours, but also spending time with God and in their service to the poor and downtrodden, each being the face of Christ for each other.

“There is such a need in hospital and prison ministries,” he said. “There is no greater poverty than in prison, not only material-wise, but you are forgotten and treated with disrespect. I have seen men there set on fire with God’s Word.”
Deacons are also known as keeper of the cup, distributing the Blood of Christ in the chalice during Mass.

“Do you realize the tremendous influence you have? Don’t ever underestimate distributing the chalice, obviously you are a servant of God,” he said.

“As president of the U.S. Conference of Catholic Bishops, I say you are a great hope for us. We want to see the diaconate intensify and become a more deliberate presence.”

Referring to a recently released book “Word, Liturgy, Charity: The Diaconate in the U.S. Catholic Church, 1968-2018,” Cardinal DiNardo congratulated Deacon Gerald DuPont for assisting senior research associate Mary Gautier of the Center for Applied Research in the Apostolate at Georgetown University in writing about updated statistics and surveys of deacons and their wives.

He said, “It measured the satisfaction with one’s life: of their environment, their wives and their larger diocesan duties and relationships. It showed deacons are basically happy people.”

From the first deacons ordained since 1969, the numbers have grown four percent each year to currently number about 18,000 in the United States. That is 40 percent of deacons from around the world. In the Archdiocese, there are as many deacons as there are priests, each in the 400-plus range.

DuPont, former director of the Archdiocese’s Permanent Diaconate and president of the International Diaconate Centre, and Gautier conducted a presentation at the Congress, sharing research data from their book and perspectives of deacons, whose average age ranges in their 60s.

“We need more support to recruit and help younger men become deacons, even those with small children at home,” DuPont said. “How did we get to this point where the diaconate is mostly considered late in life?”

Deacons can be ordained at 35 years old, but can begin discerning and taking formation classes at a younger age, he said.
“It takes longer now to become a deacon, up to seven years. Before retirement, deacons gave 30 years of service. Now it averages 17 years,” DuPont said.

Among those attending the Congress, Deacon Dale Steffes of Houston’s St. John Vianney Church has served more than 40 years as a deacon and sees the diaconate growing even stronger. Featured in the “Deacon Digest” magazine as one of the pioneers, Deacon Steffes said, “As the needs of the church and community continue to grow so will the need for more deacons to serve those needs.”

Also attending the Congress, Deacon Gary Hilbig, coordinator for the Archdiocese’s Clergy Pastoral Outreach Ministry, said, “It was a great experience being with brother deacons and their wives celebrating the restoration of the permanent order of deacons. From the opening Mass to the closing Mass, the liturgies were beautiful and prayerful. The talks were excellent.”

His wife, Ann Hilbig, said, “The conference was filled with inspiring and challenging messages. Speakers called us as deacon couples to be who Christ calls us to be and then to act with integrity.”

Ann, who works as senior vice president with social services at Neighborhood Centers Inc. now known as BakerRipley, said, “We were called to be courageous and to engage the world — understanding the times in which we live and responding accordingly. We left the conference with a renewed sense of mission — as emissaries of Christ’s love.”
Many of the wives also attend formation classes at St. Mary’s Seminary with their husbands with some earning diplomas and master’s degrees in pastoral studies.

From St. Hyacinth Catholic Church in Deer Park, Pamella Pitman and her husband Charles Pitman, scheduled to be ordained this coming February, will be awarded their master’s degrees this year and both attended the congress.
“We were so glad that the congress opened up to include those in formation. Listening to the bishops from around the country and deacons, we realize the diaconate is still a gift being discovered,” said Pamella Pitman, who works as director of Liturgy and music at St. Hyacinth.

Charles Pitman said attending the Congress and sharing in the fellowship of deacons and their wives gave him a greater appreciation of what is to come after the final exams of their last fall semester.

The Archdiocese’s 2019 class has more than 40 men to be ordained as deacons. So Cardinal DiNardo said he decided to split the class into two separate ordination dates on the same February weekend to better fit the lengthy ceremonies, a true blessing of abundance.

Deacon Phillip Jackson, current director of the Permanent Diaconate for the Archdiocese, said he treasures many “nuggets” of wisdom from the Congress.

Jackson said, “One that speaks not only to deacons, but to us as baptized Catholic Christians as well, is that Jesus as our Formator will teach us how to serve.”

Deacon Gerald DuPont, former director of the permanent diaconate with the Archdiocese and former chair of the National Association of Diaconate Directors, was recognized for his service at the 2018 National Diaconate Congress in New Orleans.

He was honored with the Bart O’Leary Award for his work on the landmark 2018 National Study of Deacons, his consultant work representing the diaconate for the U.S. Conference of Catholic Bishops, his term as NADD chair (2010 to 2014) and his current presidency with the International Diaconate Centre.

The Bart O’Leary Award for outstanding service is named in honor of the former director of the diaconate program in Honolulu and former president of NADD, who exemplified the spirit of the award through vision, creativity, promotion of the diaconate, dedication and leadership.