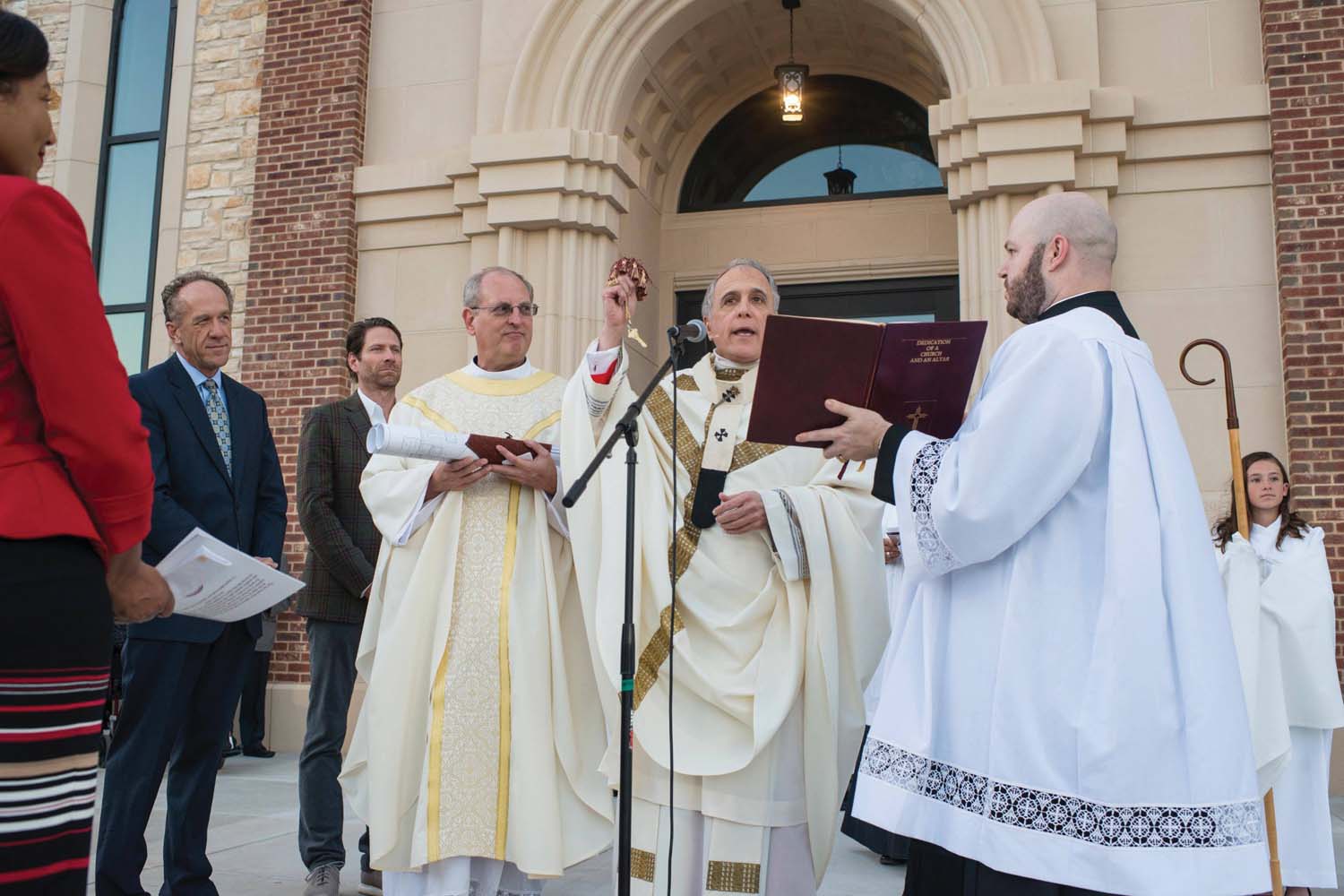 MISSOURI CITY — When the new Co-Cathedral of the Sacred Heart was dedicated on April 2, 2008, an Ursuline sister of St. Angela Merici approached Daniel Cardinal DiNardo asking why there was no statue of St. Angela Merici among the many saints represented in the downtown Houston cathedral.

Cardinal DiNardo welcomed the observation and made the religious sister a promise: “The next church we have, Sister, we will call it St. Angela Merici.”

Cardinal DiNardo made good on the promise, establishing a Catholic parish in Missouri City, founded Oct. 1, 2007, and naming it St. Angela Merici. Ten years and a month later, on Oct. 30, he dedicated the new church building to a capacity crowd.

“As the chief shepherd of this local Church of Galveston-Houston, I offer you my personal blessing and my sincerest congratulations,” he said. “The erection and dedication of a permanent church building is a sign of maturing and fruitfulness of a growing parish community.”

The church, administration building and Parish Life Center (PLC) are located at 9009 Sienna Ranch Road on 26 acres of property in the Sienna Plantation community of Missouri City. The opening and dedication had been delayed after tornadoes and floods ravaged the community during Harvey.

“It is inspiring to offer Mass there and I know the parishioners are inspired (by the church building),” he said.

Eight months after the church was founded, a facility, the PLEX, was leased in Stafford and the first Mass was celebrated on June 22, 2008. Weekend Masses, as well as religious formation sessions were held at the PLEX until the first building, the PLC, was completed on the property.
On Sept. 4, 2010, Cardinal DiNardo blessed and celebrated opening Mass in the PLC, which consisted of a large gathering space for worship which accommodates 500 people, a meeting room for group gatherings, three large classrooms and a hospitality area.

“The new church means we can continue to grow as a parish even as our community in Sienna Plantation is growing,” he said. “It also means we can better accomplish the work of God for our people. The new church freed us to dedicate our current Parish Life Center to educational and meeting purposes and the new administration building makes it much more convenient for parishioners to participate in the life of the parish.”

Long-time parishioner Heather Reichert said she is in awe of the size and magnitude of the new church building.

“It’s such a different feel from our Parish Life Center where we have been celebrating Mass for the past several years,” she said. “The stained glass windows are spectacular, and the artisanship required for them is a true gift. It already feels like the church is a beacon for the community. People are coming from all around. People I’ve never seen before. And they walk in the doors and their eyes and their chins are immediately lifted. You’d thing they were at the Sistine chapel or something. They just wander in awe. And I love those moments.”

“From the actions that Cardinal DiNardo performed through the various blessings of literally every surface and component of the church, to the glorious sounds coming from the choir... it was an experience I’ll never forget,” she said.