Defending all ‘day and night’: Annual Firefighters Mass honors firefighters for their service 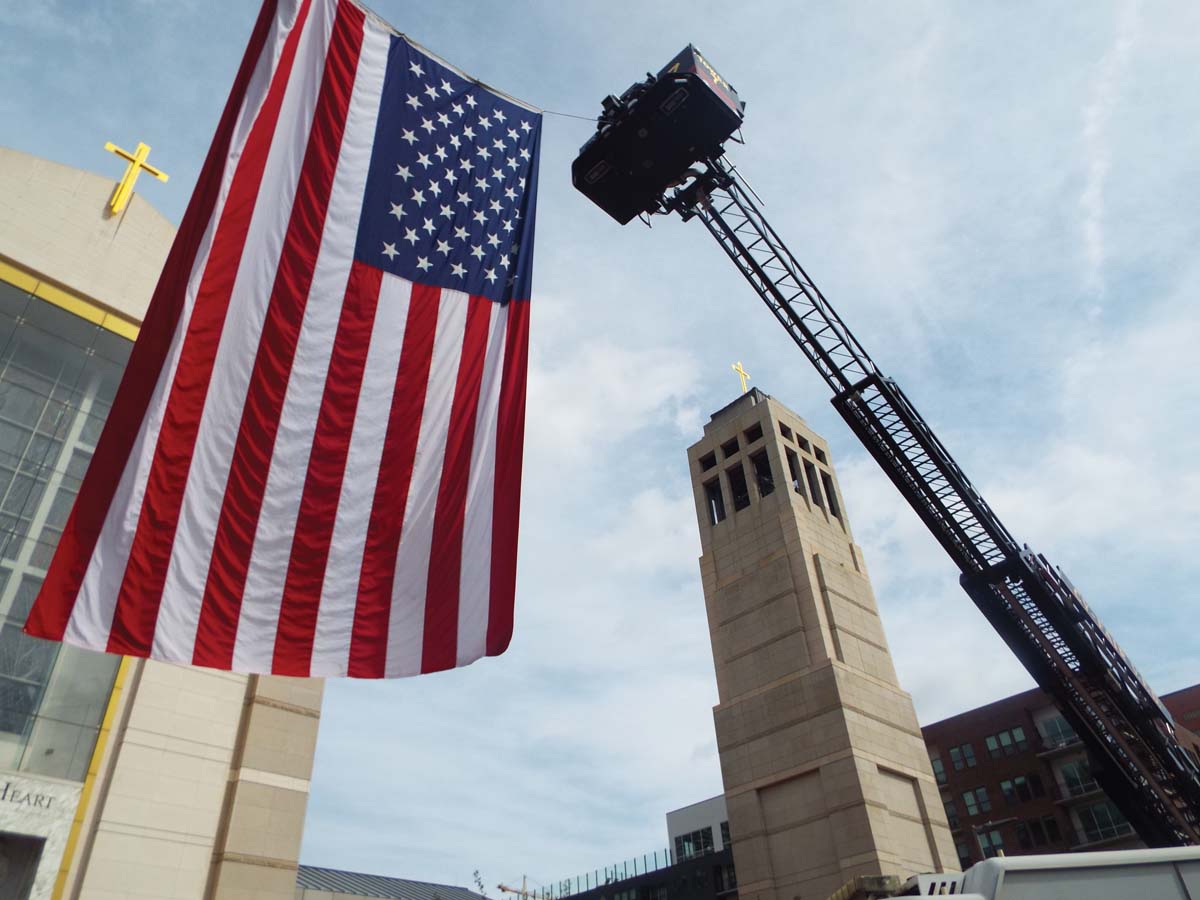 Above, fire truck ladders hoist up a giant U.S. flag seen between the crosses of the Co-Cathedral of the Sacred Heart and its bell tower as part of the ceremony for the Annual Firefighters Mass Nov. 25 in Houston. Below, Archbishop Emeritus Joseph Fiorenza, center, and Houston Fire Department Chief Samuel Peña to the left and Father Lawrence Jozwiak, pastor of the Co-Cathedral of the Sacred Heart, celebrated the Annual Firefighters Mass Nov. 25 to honor those who serve to protect residents and their property. Photos by Jo Ann Zuñiga/Herald.

HOUSTON — Archbishop Emeritus Joseph Fiorenza thanked firefighters at a Mass Nov. 25 honoring their service in protecting residents and their property as well as charitable work, including collecting toys for children at Christmas.

Houston Fire Department Chief Samuel Peña along with his command staff and firefighters from other jurisdictions processed into the Co-Cathedral of the Sacred Heart carrying ceremonial axes and the banner of St. Florian, patron saint of firefighters who was a Christian in the Roman Army leading firefighting brigades.

Music by a bagpipe and drummer corps wafted down from the choir loft.

Praying over the firefighters, Archbishop Fiorenza asked “God to have a very special, powerful blessing above all of you, men and women, who defend us day and night, all through the year.”
During the Mass, a special tribute was given to firefighters who passed away in the previous year. Each name of deceased firefighters was read aloud accompanied by the tolling of a large silver-hued bell.

That tribute included Sealy Fire Chief Eric Zapalac who died of a massive heart attack last November; Houston Fire Department firefighter Jakob Lawson who passed of cancer October 2017; and Houston Fire Department and Batson Volunteer firefighter Brian Sumrall, who died in a Sept. 17 tractor accident on his way to load hay into the vehicle of a cattle owner impacted by Hurricane Harvey flooding. Sumrall had also assisted rescuing people from their flooded homes in the Batson, Texas area near Beaumont.

“This Mass is an opportunity for all active and retired firefighters to pray together, to honor those firefighters who have passed and to have a fraternal gathering with other firefighters and their families,” said Chief Josef Gregory, Mass organizer and Houston firefighter.

“This is a dangerous, high-risk profession. Support from family, friends and the community lets our firefighters know they are appreciated,” Chief Gregory added.