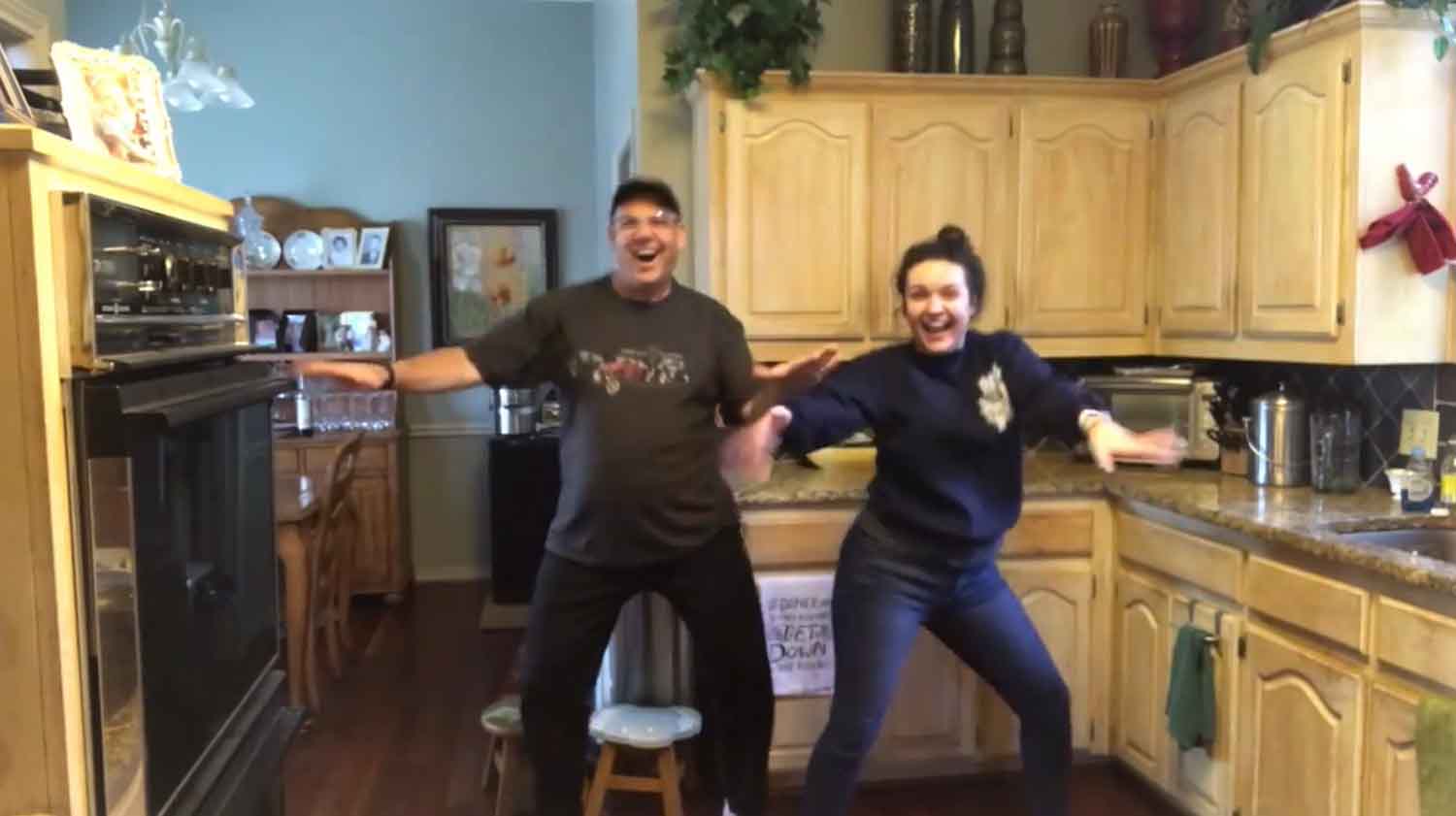 In a viral video posted March 21, Ali Hoffman and her parents Michael and Michele hope to spread joy and humor to families who are increasingly being told to self-isolate due to pandemic concerns. (Video screengrab by James Ramos/Herald)

CARROLLTON — When health officials recommended self-isolation to slow the spread of the coronavirus (COVID-19), Ali Hoffman and her parents Michael and Michele found themselves quarantined in their Fort Worth-area home.

In their boredom, they donned their “party pants,” and filmed a short video of themselves dancing in the kitchen to “Hold My Hand” by Jess Glynne. There’s no formal choreography: lip-syncing, slow motion, air drums (and piano and trumpet), as well as floor slides a la Tom Cruise’s “Risky Business” dance, all abound. At one point, jazz hands beckon Ali’s mother into the frame for her cameo.
Within 72 hours of Ali’s March 21 Facebook post, the video went viral, racking up nearly 5 million views and more than 183,000 shares.

But this isn’t the first time the Hoffman Family went viral online.

Five years ago, a winter storm froze the Dallas-Fort Worth Metroplex. Icy roads kept Ali and her parents inside.

Perhaps to warm up in the frigid temperatures, an impromptu dance party broke out in the family’s kitchen. The third youngest in the family of six, Ali recorded and posted a video of the one-take performance to her Facebook account. Since its Feb. 2015 posting, the video, which featured Ali and her parents dancing to “Uptown Funk” by popstar Bruno Mars, has been viewed more than 13 million times.

The irony of their new video’s song choice wasn’t lost on Ali or Michael.

“It’s a fun song to dance to,” 29-year-old Ali said from their Carrollton, Texas home.

“But please don’t hold my hand,” Michael said, referring to the current health recommendations by authorities nationwide to avoid physical contact to slow the COVID-19 spreads and “flatten the curve.”

Despite the viral fame, which vaulted all six members of the Hoffman Family to prime-time stardom when ABC’s “Dance Battle America” showcased the family in 2015, the father and daughter look for the simple joys in life amid a world that is “shutting down” all around them.

The sentiment is the same as it was in 2015: to choose and interject “joy and levity into the situation,” Ali said. “If you’re at home, don’t give in to despair and fear.”

The father and daughter admit their lives, just like millions around the world, have been rapidly changing.

Ali, youth ministry director at St. Catherine of Sienna Catholic Church in Carrollton, has been observing self-isolation and social distancing since mid-March. Since her parish suspended all in-person ministry mid-March, Ali has been hosting online hand-lettering workshops through her project The Oodles of Doodles on social media for those staying at home who are looking to pick up a new skill.

The isolation has helped her to take stock of what she truly needs, as well as check on her community of friends and family in a time of social distancing.

The time has “definitely put an emphasis on sacrifice,” Ali said. “It really put into perspective… ‘Do I really trust in Jesus?’”

For example, Michael and Michele can’t visit their newest granddaughter born March 1, and Ali can’t minister in person with the youth she’s seen nearly weekly since last August. And Michael, a motivational speaker, has seen waves of event and conference cancellations slow down his typically busy spring schedule.

With regions across the country, including Ali’s own Dallas County, going into lockdown, Michael finds being sheltered at home timely for the Lenten liturgical season.

“Being (older) than Ali, [Michele and I] have been through a few things. This too shall pass. This is a season,” he said. “We’ll be able to say that we let the joy shine a little bit. There’s no such thing as darkness… You can’t hold it. It doesn’t grow. Darkness is the absence of light, and in these times, God’s asking all of his people to be more light.”

While government officials issued orders to self-isolate, Ali and Michael issued their own challenge to other families to post their quarantine dance videos using the hashtag #QuarantineChallenge2k20, which has seen dozens of videos.

Dan Solomon, a writer at Texas Monthly magazine, noticed Ali and Michael’s “penchant for dance” and called the challenge “charmingly earnest” during the “strangest days many of us have ever lived through.

“While we all struggle to find ways to center ourselves amid the crisis, let’s take a moment to gratefully acknowledge the Hoffman family for their dedication to dancing through this thing,” he wrote.

The family remained focused on what they can do despite not knowing what the result might be.

“We’re trying to change things and fix things to make it the outcome that we want. We’re taking good measures,” Ali said. “But I think this just reminds us that we’re just human and we’re in this together, and there’s a lot of fear, but there can also be a lot of light in that.”

As in 2015, the family’s viral videos prompted a flood of messages to Ali’s inbox, most of which reflect two thoughts. Ali sees viewers sharing fond, joyful family memories with her, and a greater wish and a deeper need for community and the universal aspect of longing.

The video “does touch on the humanity” of a world in self-isolation, Ali said, noting the other viral videos of Italians and Spaniards singing from their balconies and rooftops during their mandatory quarantines.

And while everyone in the world may not have a balcony for singing, Ali said everyone has a kitchen or a room for dancing.

“Lift up your head from your belly; don’t be a belly gazer and keep your head up,” she said. “We’re all in this together.”