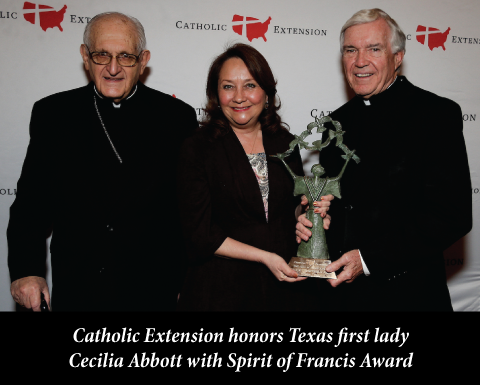 HOUSTON — Catholic Extension honored Cecilia Abbott, the First Lady of Texas, with its Spirit of Francis Award on Jan. 28. Catholic Extension, the national Catholic fundraising organization, honored Abbott for her commitment to Catholic education in Texas as well as for her lifelong devotion to service and to philanthropy, in particular to the Catholic Church in Texas.

The awards dinner at The Houstonian Hotel in Houston was the first of its kind in Texas and drew more than 150 guests. Houston-Galveston’s Archbishop Emeritus Joseph A. Fiorenza served as co-host of the dinner. In addition, Bishops Curtis Guillory of Beaumont, Texas; Oscar Cantú of Las Cruces, New Mexico; Michael Pfeifer, emeritus of San Angelo, Texas; and Ricardo Ramirez, emeritus of Las Cruces, also attended the event.

Catholic Extension’s president, Father Jack Wall, said of Abbott, “Throughout her life, Abbott has lived and embodied the important lesson of faith, a faith that she learned from her parents and immigrant grandparents.” The lesson, he said, was “that you not only need to receive a good education, but you are then meant to pass on its values and blessings to others and dedicate your life to helping and uplifting others through education and through works of charity.”

Abbott’s passion for Catholic education has its roots in her career as a teacher, vice principal and principal in Catholic schools throughout Texas. She continues to serve on several Catholic school and university boards, including at the Cathedral School of St. Mary in Austin, where she was the principal for five years, and at the University of St. Thomas in Houston.

Father Wall also observed that, “as the first Hispanic First Lady of Texas, she has been building bridges and reaching out to all the people of Texas, encouraging us toward that common family through her own example to volunteer and to make a difference.” Referencing the First Lady’s “Texanthropy Initiative,” Father Wall quoted her as saying, “I am working with all Texans to bring together the two things that I am most passionate about: Texas and philanthropy.”

Abbott selected to direct the more than $100,000 raised during the event toward the cause of supporting seminarian education in Texas. Catholic Extension funds scholarships for 70 seminarians from mission dioceses at St. Mary’s Seminary in Houston as well as Assumption in San Antonio, and Holy Trinity Seminary in Irving.

In accepting the award, Abbott said she was humbled to receive the honor and “particularly touched” by its connection to St. Francis, “one of my favorite saints.”

She recounted that, while growing up in San Antonio, she loved to play in her church, which was across the street from her home, with her dog Pancho.

She said it was her dog’s favorite place, “so much so that it was not unusual for an announcement like this to be made at Sunday Mass: ‘Would the Phalens please remove your dog from the church.’ My parents must have been mortified, but I am telling you, I know that St. Francis, with his love for all animals, would have understood.”

Abbott also quoted a line from the Prayer of St. Francis: “It is in giving that we receive.’”