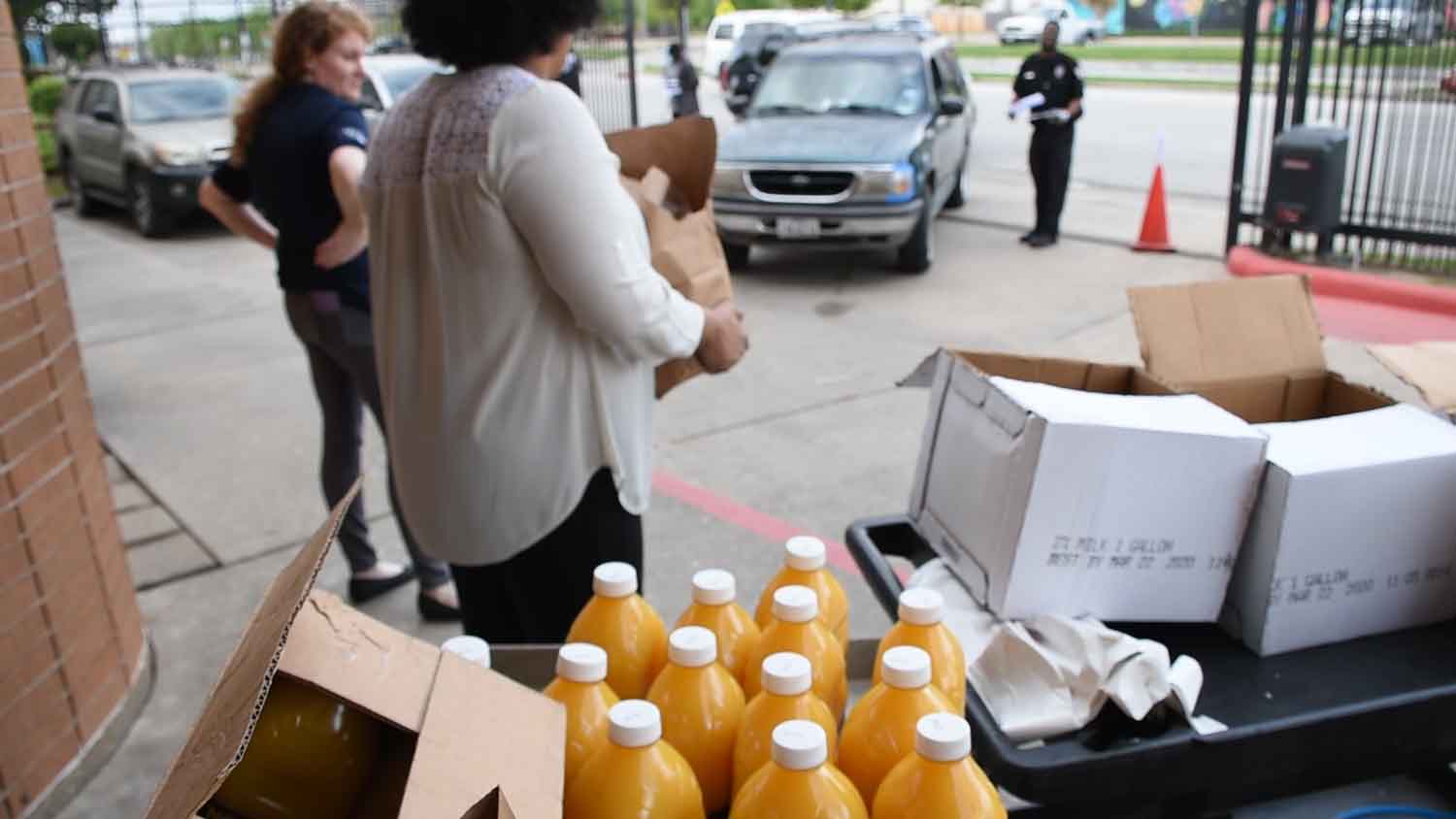 Catholic Charities staff and volunteers distribute groceries, including orange juice, milk, and other staples at Guadalupe Center on Navigation as clients drive through to keep a safe distance during the pandemic. With layoffs and schools closed, the need continues to grow. (Photo by Betsy Ballard of Catholic Charities of the Archdiocese of Galveston-Houston)

HOUSTON — Hundreds of families are being fed and clients assisted as Catholic Charities staff continues to work through the pandemic hitting Harris and Fort Bend Counties.

The distribution of food and services has been modified to protect the clients and staff. Outside curbside operations of fresh food and pantry items both at the Guadalupe Center on Navigation and at the still-closed Mamie George Community Center in Richmond served hungry families and seniors, said Cynthia Colbert, president and CEO of Catholic Charities of the Archdiocese of Galveston-Houston.

“We are tremendously grateful for your support during this critical time, but we believe that this is just the beginning, and the full effect of the pandemic on the well-being of families and communities has yet to be fully realized,” Colbert reported in a March 22 email to donors.

“For vulnerable families, lost income due to the outbreak will translate into spikes in poverty, missed meals for children, and reduced access to healthcare far beyond COVID-19,” she said.

The social services agency has opened a Pandemic Response Fund on its website. Staff also continue seeing clients by appointment only with most work being done via telephone or online.

A U.S. Census workshop that Catholic Charities had previously scheduled for March 24 at St. Dominic Chancery was moved online to Catholic Charities’ Facebook. Sister Maureen O’Connell, director of the Secretariat for Social Concerns, and Catholic Charities staff members Rhonda Sepulveda and Elizabeth Stephens urged individuals and families to step up to be counted without fear in its “Faithful Citizenship: Be Counted” workshop.

In the midst of the coronavirus, the 2020 U.S. Census launched April 1, opening a once-every-decade season in which every individual living in America is counted. Results from the Census are crucial, directly related to political representation and how millions of tax dollars are allocated to communities for schools, healthcare, housing and other matters that impact quality of life, the workshop speakers said.

“In this pandemic, we are all connected. And in that connection, we are called to work with each other for social justice,” said Sister O’Connell.

“We really don’t live in isolation,” she said. “The Census helps us to have the resources available day to day. We need to make sure our first responders have what they need to do their jobs. Social justice calls for the dignity of the worker. And we see now how it is the grocery clerks stocking the shelves and the truck drivers bringing in the food from the farmers – not just in Houston, but for people all around the world.”

As part of social justice, Pope Francis calling for the care of creation and the environment, she said.

“In China, during the quarantine, people started hearing the birds sing again in the quiet and the air was cleaner with the factories not working,” Sister O’Connell said. “Sacred Scripture calls us to participate in the environment and our lives in ways that are healthy – to act justly, love tenderly and walk humbly with God.”

Elizabeth Stephens, Catholic Charities census coordinator, said the 2020 Census helps shape the future of the community and determines federal funding. There are four ways to respond to the Census, she said. The fastest is going online via computer to my2020census.gov with a special Census ID number that is mailed to homes. Answering the form only takes about 10 minutes, she said.

Individuals can also request an interview via telephone in different languages by calling toll-free 1-844-330-2020. Or requests can be made to have the longer printed form mailed to address or have a Census worker come to the home. Law forbids any personal information to be shared among other federal agencies.

“We need to assure an accurate count,” Stephens said. “Our children count and are depending on us.”

But because of the spreading coronavirus, the U.S. Census Bureau is delaying the deadline by two weeks for counting everyone in the country, according to news reports.
The Census had been scheduled to stop at the end of July, but the deadline has now been extended to mid-August.

U.S. residents started responding by mid-March when the bureau’s website went live and people began receiving notices in the mail. As of March 20, 18.6 million households had answered the questionnaire, primarily online. That accounted for 14 percent of total households in the U.S., according to the Census Bureau. Nebraska, Iowa and Kansas had the highest response rates in the first week while Alaska, West Virginia and Montana had the lowest response rates.

In her prayer for the Census workshop, Catholic Charities parish and governmental relations coordinator Rhonda Sepulveda recited, “Lead us in Your Way to be light to Your people. Help us to be salt for our community. As we share Your love with those caught in the struggles of life, we desire to be Your presence to the least among us and to know Your presence in them as we work through You to bring justice and peace to this world in desperate need.”