Cardinal DiNardo recovering from stroke as efforts to bring healing continue after Co-Cathedral, parishes hold Way of the Cross services

HOUSTON — On March 20, Daniel Cardinal DiNardo was discharged from St. Joseph Medical Center in Houston and was transferred to a rehabilitation program. Doctors expect him to make a full recovery, according to a statement from the Archdiocese released that day.

“I could not be more grateful to the truly wonderful doctors and nurses at St. Joseph’s for their expert care and compassion, which has helped hasten my way down the road to a full recovery,” said Cardinal DiNardo. “I am also doubly thankful for the many kind wishes and especially the prayers that have been directed towards my healing, which I can assure you are making a true difference. I look forward to getting back to work soon, and continuing the important work we have before us.”

For those wishing to extend prayers and cards, they can be forwarded to the Chancery’s office, located at 1700 San Jacinto St. in Houston. But the Cardinal is requesting no flowers or other gifts, instead suggesting to make donations to the poor.

Bearing witness to the Paschal Mystery 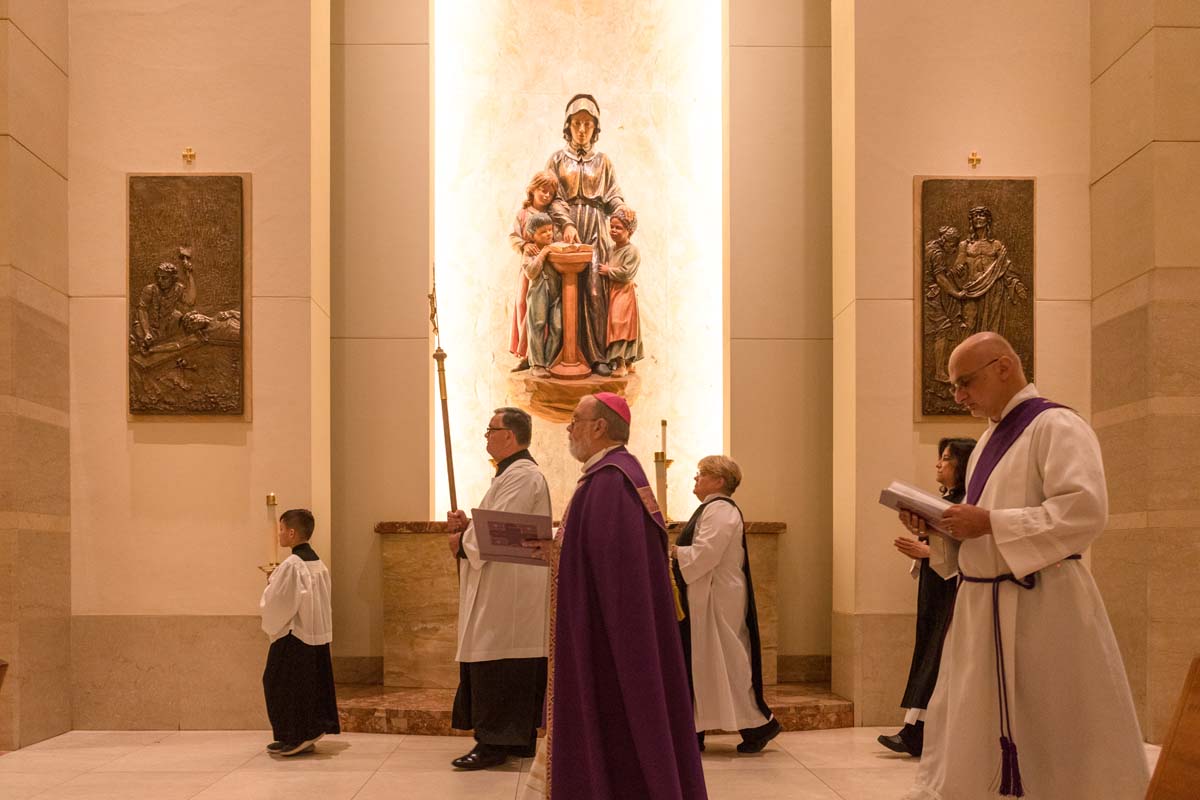 But on March 15, the Stations of the Cross carried a new meaning for people around the Archdiocese of Galveston-Houston, who gathered in their parish churches on one evening for powerful united effort to pray for “healing and purification of the Church.”

At the invitation of Cardinal DiNardo, thousands of people across the Archdiocese — at the Co-Cathedral of the Sacred Heart in downtown Houston to Huntsville to Galveston — prayed for a Church that he says has been “lacerated” by the abuse scandal and for the “courageous witness” of victims “who have helped bring this painful history out of darkness into the light of Christ.”

At St. Ignatius of Loyola Catholic Church in Spring, Archdiocesan officials said 750 turned out for the prayer service. But no matter how many attended, their prayers were raised to God as one voice to bring healing to those affected by the clergy abuse scandal.

However, while praying and walking the Stations of the Cross that line the Co-Cathedral’s towering walls, it became clear that Cardinal DiNardo was not feeling well. By the sixth station, Cardinal DiNardo reluctantly informed the congregation that he was not feeling well and was taken to a nearby hospital where he was diagnosed as having suffered a mild stroke, according to an Archdiocesan statement.

Auxiliary Bishop George A. Sheltz continued to lead the Stations in Cardinal DiNardo’s place, a visible sign of the continuity of the leadership of the Archdiocese.

By the next day, Cardinal DiNardo was “resting comfortably and conversing with associates, doctors and nurses,” the statement said. He remained hospitalized for a few more days of testing an observation.

In the time since the incident, civic and city leaders, as well has bishops and ministry heads around the nation, have offered their prayers for Cardinal DiNardo. The U.S. Conference of Catholic Bishops, in a news release, said it joined with the Galveston-Houston Archdiocese “in praying for the cardinal’s quick recovery.”

Cardinal DiNardo, who served as USCCB vice president for three years before being elected president, has headed the Archdiocese of Galveston-Houston since 2006, when as coadjutor archbishop, he immediately succeeded Archbishop Emeritus Joseph A. Fiorenza when he retired. Then-Archbishop DiNardo was named a cardinal in 2007, making him the first cardinal from Texas and the American South. 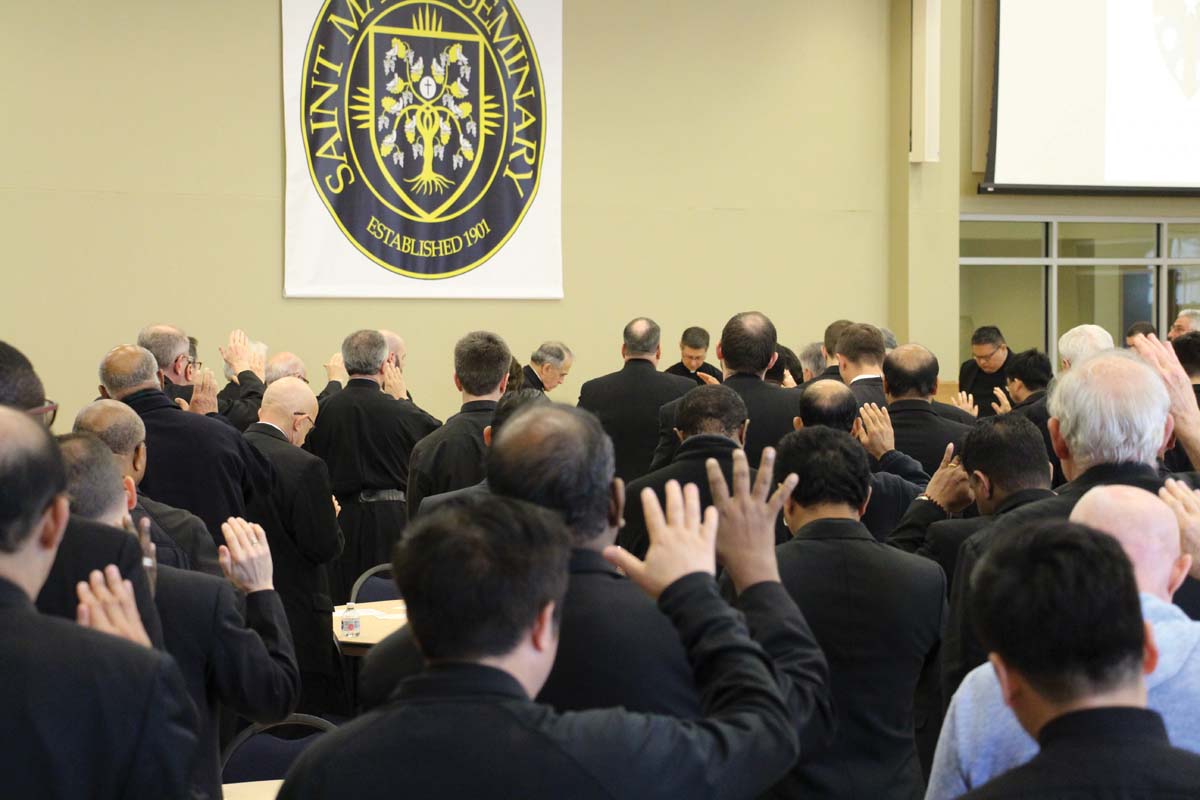 Earlier that day before he fell ill, Cardinal DiNardo gathered with the nearly 300 priests in the Archdiocese, both diocesan and religious, for a meeting with the pastoral leaders at St. Mary’s Seminary.

In the two-hour long meeting, Cardinal DiNardo gave an address to the priests. The day also included a question-and-answer session with Cardinal DiNardo, a Chaplet of Divine Mercy and a prayer service where Cardinal DiNardo prayed over the attending priests, or “messengers of His mercy” as he has previously called them, to be sent to their parishes to be united with him in prayer, especially for that evening.

In return, the priests — in what may as well have been an act of grace and the Holy Spirit considering what was to come later that day — raised their hands over Cardinal DiNardo to pray for him in his duties as cardinal and archbishop of the Archdiocese.

That night, Cardinal DiNardo had continued leading the Stations up to the sixth station, Veronica Wipes the Face of Jesus, before leaving to seek medical care.

He told the congregants he was clearly not feeling well, and said the sixth Station’s closing prayer: “Lord, grant us restless hearts, hearts which seek Your face. Keep us from the blindness of heart which sees only the surface of things. Give us the simplicity and purity which allow us to recognize Your presence in the world,” Cardinal DiNardo prayed.

“When we are not able to accomplish great things, grant us the courage which is born of humility and goodness. Impress Your face on our hearts. May we encounter You along the way and show Your image to the world.”