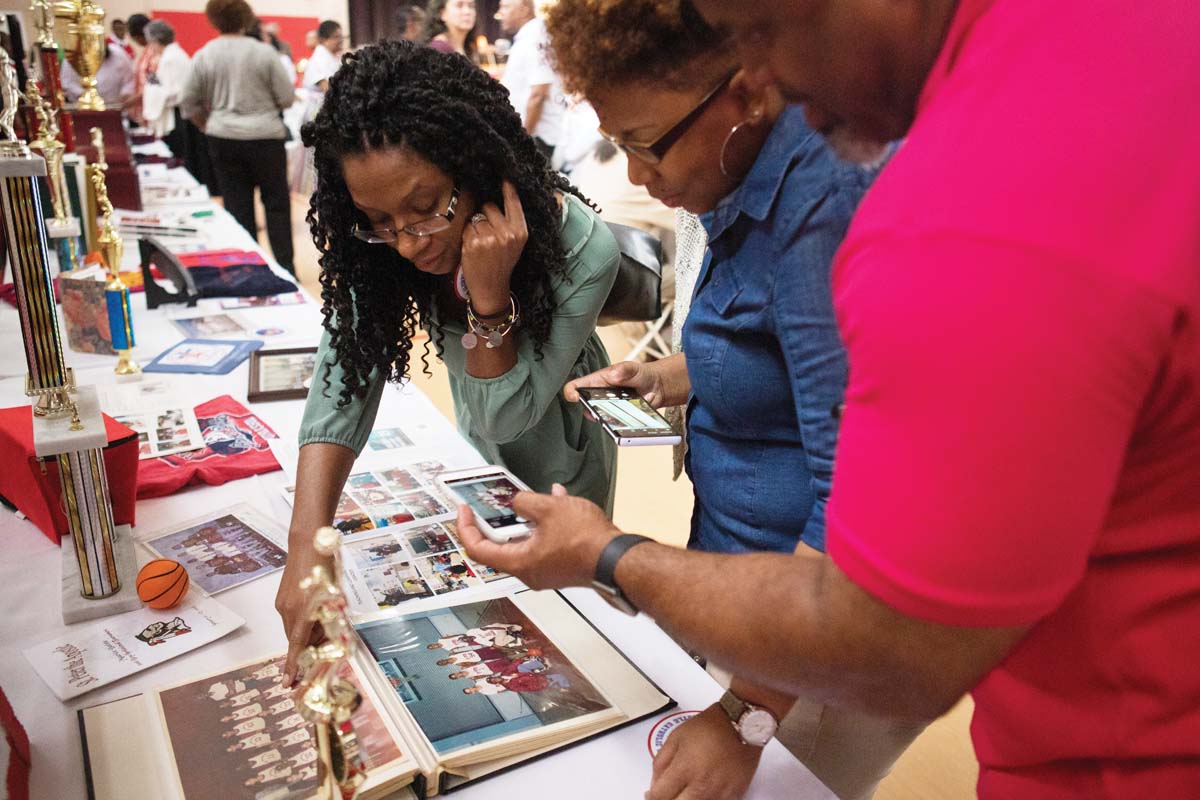 Chayvonne Winfree, a 1994 graduate of St. Peter the Apostle School, photograph pictures while flipping through old school photo albums with other alumni, including Monique Wilson, also Class of 1994, and Darnell Lander and Leveil Lander, both of the Class of 1995. Photo by James Ramos/Herald.

HOUSTON — A mix of generations, including students from the 1960s and Dominican Sisters of Houston who taught, enjoyed a bittersweet reunion May 29 at St. Peter the Apostle Catholic School closing after 77 years because of low enrollment and financial issues.

Celebrating Mass, Daniel Cardinal DiNardo said, “This is bittersweet as we celebrate together and say goodbye… But let us also shed tears of gladness and joy for all the good that has been done.”

St. Peter the Apostle seventh-grader Edmond Flournoy had four generations of his family present as he read during Mass at the Third Ward-area church. His great grandmother, Martha Caston, grandmother Susan Washington, mother Shaunta Washington and his sister Mykayla, a Sam Houston State University student, all came to support him.

“It’s been difficult. Gut-wrenching, really, because my brother is a bit shy and he now has friends here after attending first through seventh grade,” she said. “But he’ll be going to another Catholic school at St. Francis of Assisi so he should be fine.”

Others attended the school during its heyday of having up to 600 students rather than 30 in its last year. Current and retired teachers greeted former students — now fully grown with children of their own — with joy and some tears.
Tim McConnell and his sister Barbara McConnell Daily kidded around with their old friend Leo Chovanec about pranks back in the 1960s. They glanced through yearbooks, admired many trophies of state chess championships and basketball and other memorabilia that lined long tables set up in the gymnasium for a farewell dinner reception after Mass.

“It’s sad, but we had some great memories,” Daily said.

Sister Carletta Lacour, O.P., who taught at St. Peter the Apostle from 1964 through 1967, said, “That was the busy time when we had two full classrooms of each grade.”

The master of ceremonies at the reception, Raymond Bourgeois, recalled historical tidbits like when the Harlem Globetrotters, an exhibition basketball team that blends court skills with comedy, would use the St. Peter the Apostle gym to practice.

Principal Toni L. Marshall told the crowd, “We are hopeful that we will see ourselves reborn as a vocational high school.”

In the farewell presentation, Haney said, “We are very thankful to the religious communities that have supported St. Peter’s through the years. The Dominican Sisters of Houston have been a part of St. Peter’s since its inception through their time, talent and treasure, and we are so grateful for their 77 years of service to the students at St. Peter.”

Haney also thanked St. Vincent de Paul Catholic Church and School as the “sister school” to St. Peter for their generosity over the last few decades.

“All of these benefactors of the school, in addition to the Archdiocese and leadership of pastors and principals as well as the sacrifices of teachers, staff, and parents are what have allowed St. Peter to remain a presence in the community that has formed many successful citizens as their graduates. It was wonderful to see so many alumni and the current students together celebrating the gift of St. Peter the Apostle Catholic School,” she said.

Before the decision to close the school came this past March, St. Peter the Apostle pastor Father Faustinus Okeyikam said he and supporters canvassed the church and school’s neighborhood off Old Spanish Trail and beyond in an effort to recruit more students for the school.

“Our parents tried to raise funds, but it wasn’t enough to sustain the school. We placed ads running for three months in the Texas Medical Center magazine since we are in that proximity. So we definitely did try,” he said.

The pastor and principal, with help from the Archdiocese, worked with the remaining students and their families, transferring student’s records and transcripts to any school public, private, or Catholic. The Archdiocese worked with a uniform company to ensure that families receive uniforms for a new Catholic school at no cost.

About half of the students will be attending other Catholic schools, including St. Mary the Purification, less than two miles away; St. Francis of Assisi in the Kashmere Garden area; and Resurrection Catholic School near Denver Harbor and Fifth Ward.

Flournoy’s family said he and the other students will continue flourishing wherever they may go.

His sister Mykayla said, “These students will be successful no matter what. They received a strong foundation here” at St. Peter the Apostle school.