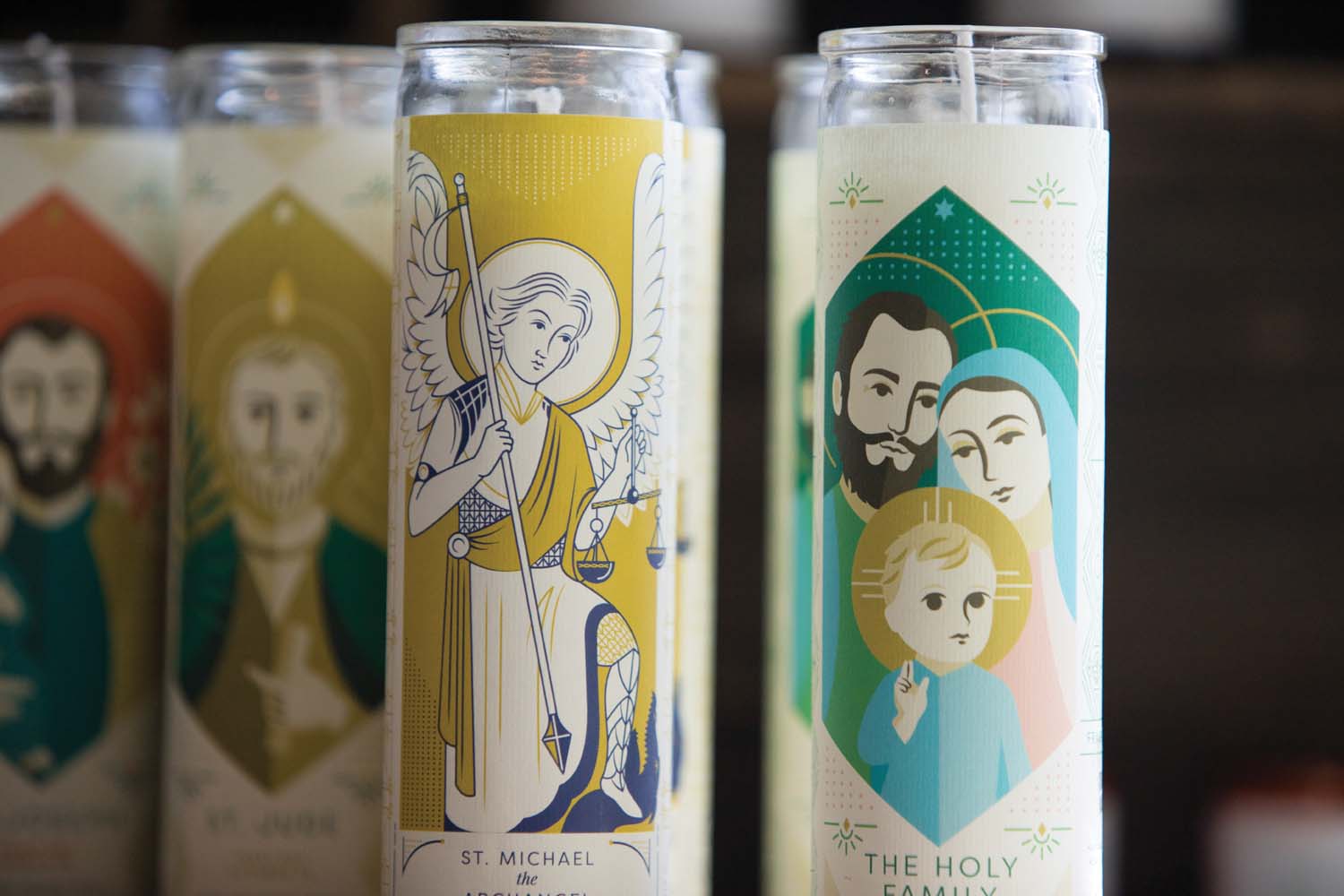 Images designed by Tricia Dugat of Providential Co. are printed onto candles depicting St. Michael the Archangel and the Holy Family. Dugat focuses her talents as graphic designer to share the beauty of the Gospel through thoughtfully designed and carefully crafted goods, like votive candles, prayer cards, prints and more. For more, visit online at www.providential.co. Photo by James Ramos/Herald.

HOUSTON — After designing yet another PowerPoint and some more worksheets for her high school students’ next lesson, Tricia Dugat decided to finally chase a dream. And then another dream.

Even despite her conversion to the Catholic faith through RCIA as an adult, Dugat thought she successfully tried to escape the secular world, leaving agency life as a full-time graphic designer to teach theology with her theology degree at a Houston Catholic high school to live out her faith. But even there, surrounded by Catholics, she still found dissatisfaction.

“My life just started to fall apart,” Dugat said. Everything started to crumble around her, including her marriage at the time, she said. She married very early in life, and with three children she thought being a Catholic school teacher would make life “rosy and perfect,” but the she said the opposite happened.

“I went through a divorce,” Dugat, who attends Our Lady of Walsingham Catholic Church in Houston with her husband and five children, said. “My mom died very suddenly. And my life was just this really dark, dark place. And I felt very distant from God.”

From there, she slowly re-oriented herself and dove back into designing full-time, and her life radically changed once again.

“I’d long wanted to get back into creating things, even when I was a teacher,” she said. “It was part of me that I was trying to deny,” but she’d find herself getting excited to design PowerPoints and worksheets for her classes. Then she realized: “Well... this is just part of me. This is a gift that God has given me. And rather than trying to run away from it, or see it as this totally worldly thing, why can’t it be redirected into my love of theology? Why can’t I bring these two loves together?”

The first thing she designed were icons, digitally drawing images of St. Teresa of Calcutta and St. John Paul II, among others. Dugat wanted to use her art as a “channel to inform people about the faith” and share the Catholic Intellectual Tradition of the faith, that helped her to understand and join the Church.

As with most ventures, she was fraught with fear: Are these reverent enough? Does this appeal to people? These worries plagued her as she started her new business, eventually named Providential Co. “because of God’s providence at the heart of everything that I’ve experienced,” she said. “He’s provided for me in the darkest of moments, and He’s always been there, even when everything else is crumbling.”

Soon she started designing and hand pouring votive candles, which quickly became a popular item. Growing up in El Paso, Dugat was surrounded by Catholics and always wondered what many non-Catholics think: “What’s the deal with Catholics and those weird things they do? Like lighting candles?” She found the Catholic faith to be visually intriguing: the churches, candles and artwork were all so vibrant to her.

Her 100 percent soy-based votives are purposely designed to be sustainable and not poisonous and are clean-burning (soot free). They feature paper-core wicks with phthalate-free fragrance oil, referring to the toxic chemicals found in many mass-produced candles.

Votives, found on home altars across the world, are a tool, a sacramental and a “reminder of the presence of a person’s prayer intentions and of God’s connection with us through prayer,” she said.

Today, her candles are among her most successful products, and she finds joy in what she does. She also makes prayer cards, pouches, posters, apparel and a new ‘Saintly Wisdom’ series of votives featuring quotes from saints. Her prints are locally produced in Houston, supporting local small businesses.

“It’s just free, creative expression, and of the most beautiful truths possible,” she said. “It’s in its purest, most relevant form. It doesn’t get better than that.” She also hopes her art counters some of the anti-Catholic media found across the world.

Tragedy and beauty of the cross

One Spring day earlier this year, Dugat saw the power of votive candles come to life as true expressions of the realities of the Catholic faith.

A woman, who was diagnosed with stage IV cancer, had found Dugat’s candles and asked her if she’d be open to making more for each of her children before she died. The woman later passed away, and Dugat said she felt honored her candles could accompany the family in the death of their mother. Dugat learned that the family burned the candles until the day she passed away.

It’s an “insignificant surface, a burning candle, but at the same time, it’s alongside their prayers” of the family, she said. “It’s in the midst of their profound suffering, and this family’s tragedy, which was both very sad and very beautiful at the same time... A part of our faith, right? ... It’s that tension in between tragedy and beauty, which is the Cross.”

“The arts give expression to the beauty of the faith and proclaim the Gospel message of the grandeur of God’s creation,” he said. “When we admire a work of art or a marvel of nature, we discover how everything speaks to us of Him and of His love.”

He encouraged the faithful to pray “that artists of our time, though their creativity, may help us discover the beauty of creation.”