A renovated home for the holidays: St. Francis of Assisi parishioners mark second Christmas since Harvey 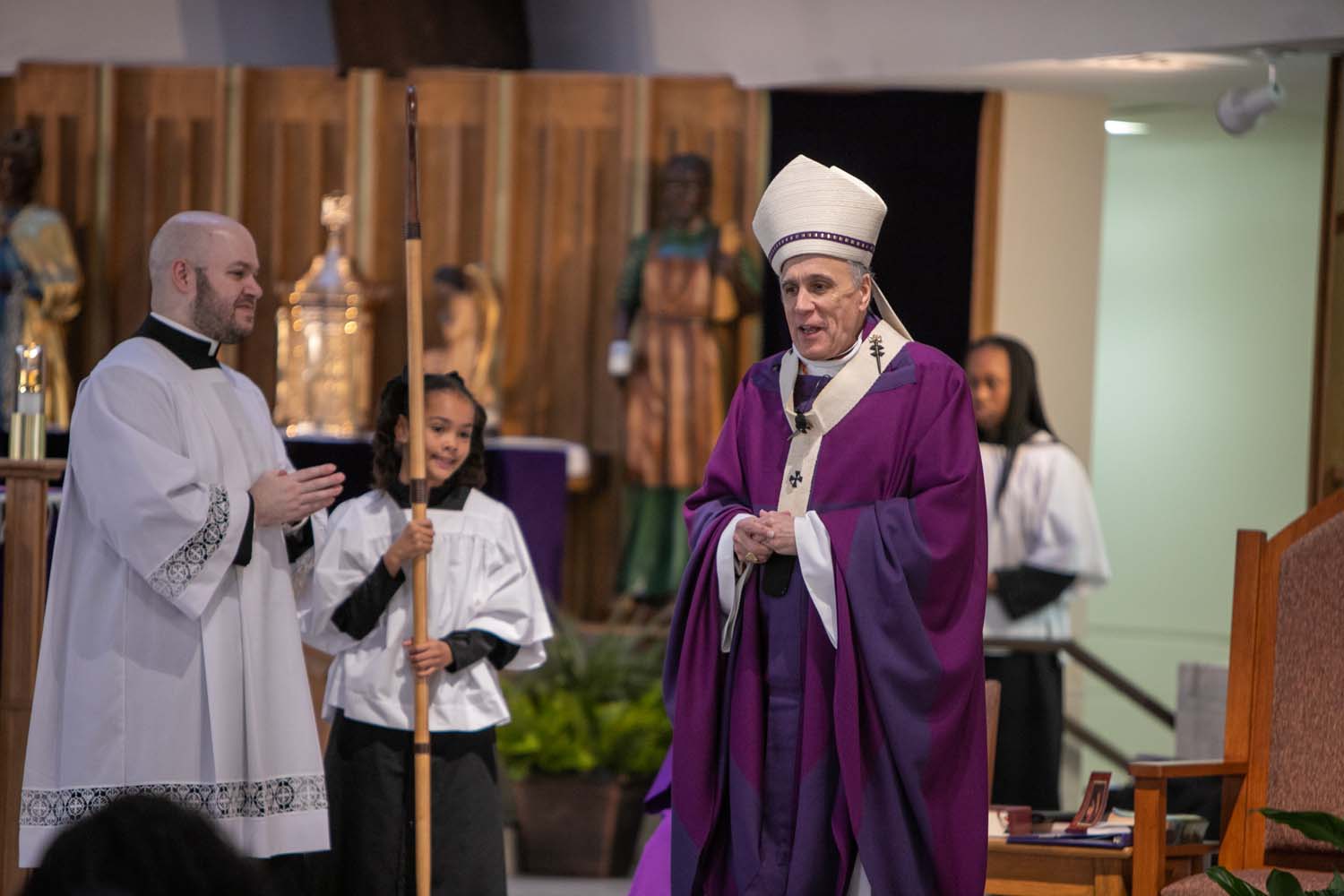 HOUSTON — More than two years after Hurricane Harvey flooded St. Francis of Assisi parishioner Kathy Gabriel’s home, she finally celebrated the holidays this past November and December in her home that had to be demolished and rebuilt.

But it was too late for her 55-year-old disabled husband who died New Year’s Day 2019 before their home was completed. 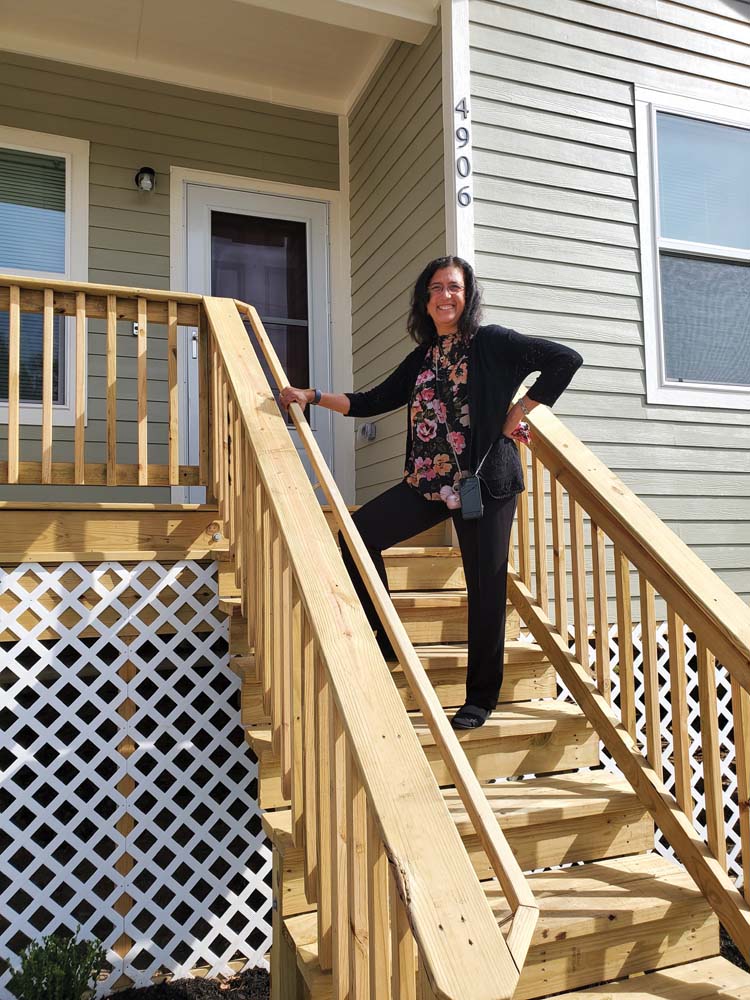 The 57-year-old, an employee of Houston Methodist Hospital, said, “It broke my heart when I visited my husband in the hospital or hospice and he would ask me, ‘Have they started the house yet?’”

Several other elderly and disabled parishioners from that flooded area also perished before repairs could be done to their homes, said Sherry Dunlap, a fellow parishioner who took it upon her faith in action to help those families.

“Thanks to training through TMO (The Metropolitan Organization), I became the de facto Harvey Disaster Case Administrator for the church and our parishioners and others around the city,” Dunlap said.

Even St. Francis of Assisi Catholic Church itself was inundated with water and the subsequent problems of mold and other issues that the Archdiocese helped to resolve.

TMO and Gulf Coast Leadership Council (GCLC) representative Gina Reynoso said the nonprofit organizations acted as a conduit to connect people in need after the hurricane with the multitude of agencies attempting to help.

With contribution from the Catholic Campaign for Human Development, GCLC organized meetings with churches and their congregations impacted by the hurricane as being places of trust among the flurry of contractors and others trying to get a piece of the work.

Reynoso said, “In the last two years, GCLC has held outreach sessions reaching more than 2,000 people. We also invited the agencies to attend, including the city of Houston, Harris County, Catholic Charities, St. Vincent de Paul, ICNA, and others. A special recognition to Catholic Charities for the funding provided to individual parishes to help their communities.”

Three of those sessions were at the Kashmere Gardens-area church since about 50 families out of the 300 parishioners at St. Francis were all flooded.

At first turned down for assistance because she worked, Gabriel finally received help from a disaster case manager at Baker Ripley community agency who connected her with PREPS (Partial Repair & Essential Power for Sheltering), which is state-supported and federally funded. But that contractor left gaps in the replaced floorboards big enough for recluse spiders and centipedes to crawl through. It wasn’t a sterile enough environment for her diabetic husband, who was also on dialysis and battled multiple infections, she said.

“We stayed at a hotel for two months, but the funds for that ran out before the home was finished,” Gabriel said of the hotel funds allotted to them from FEMA through Baker Ripley.

They couldn’t stay with relatives because the homes of her father, sister and brother were all impacted by the flood.

Finally, with FEMA funds distributed by the city of Houston, her home was demolished and rebuilt.

“It’s a brand new house now, a bit bigger and four feet off the ground,” Gabriel said. “I wish my husband would have seen it. He would be glad we’re back at home.”

In his first public visit to the parish since visiting the Kashmere Gardens community members in the days after Hurricane Harvey pushed at least four feet of floodwater into the parish’s church sanctuary, school and parish hall, Cardinal DiNardo was the main celebrant for the 10 a.m. Mass on Dec. 22, just three days before Christmas.

In March 2019, Auxiliary Bishop George A. Sheltz celebrated the Mass of Blessing of the Restored Church at St. Francis because Cardinal DiNardo was still recovering from the stroke he suffered a few days before that Mass.

Since the storm, the parish and school community has continued to grow in faith. Since its completion in the spring, the church sanctuary has returned to its status as the spiritual home for the community.

In the months after the storm, the parish had previously met for Mass under a tree, a tent, a nearby Catholic church, a large garage structure, then eventually the restored parish gym.

The St. Francis of Assisi Catholic School, whose students were displaced to another nearby Catholic school after the storm, re-opened in August 2018.

The school suffered looting and the major flooding destroyed much of the school’s technology classrooms and instructional resources. Since the storm, church buildings saw major renovations to help the parish community be more prepared for another storm that could come in the future.

While much of the renovations saw brand new installations, like the new church walls, new waterproofed flooring, a new large crucifix, ambry and baptismal font, elevated HVAC and electrical systems, raised cabinetry, as well as stackable church pew seats, a new addition wasn’t new at all. In fact, it was quite old.

Hanging several feet in the air, a newly installed sanctuary light glowed brightly. The candle lamp, which indicates and honors the presence of Christ in the tabernacle, was an original sanctuary light that survived the Great Storm of 1900 that ravaged Galveston.

The ornate golden candle came as a donation from The Congregation of the Sisters of Charity of the Incarnate Word, a community that has also weathered many storms.

“We are privileged to have this lamp to show... the light of Christ,” said Father Eke.

The congregation is well known for its community of 10 sisters who perished in the Great Storm, among the 6,000 who would die during the hurricane, while trying to protect the children under their care.

Also after Harvey, the church’s bell tower was restored in September 2019. The bell had been silent for about 30 years, Father Eke said.

At the end of the Mass, Cardinal DiNardo wished the parishioners a blessed Christmas and a happy New Year and prayed they have “great grace and strength” to “celebrate the beauty of the Nativity.”