A fiesta of color honors Our Lady of Guadalupe 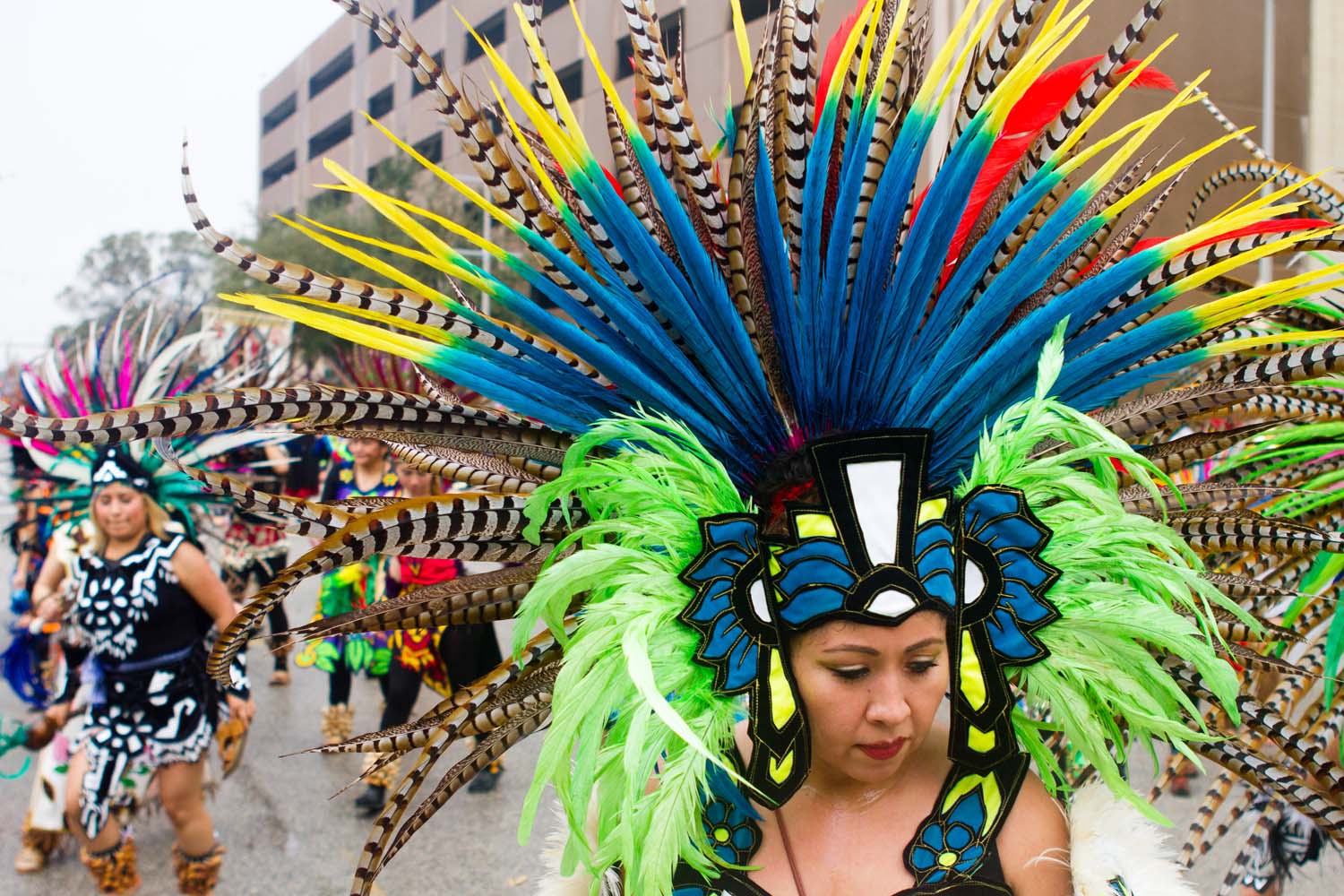 At least 800 process through downtown Houston to honor Our Lady of Guadalupe Dec. 3. The parade ended at the downtown convention center. More than 1,000 danzantes and matachines traditional dancers performed during the event. Photos by James Ramos/Herald.

HOUSTON — The annual Archdiocesan Celebration of Our Lady of Guadalupe filled the streets of downtown Houston with colorful cultural displays and music of centuries-old Mexican tradition.

Held on Dec. 3, more than 1,000 Danzantes and Matachines (indigenous folk dancers), all wearing elaborate headpieces called penachos and traditional Aztec-style dress, processed from the downtown Chancery to the George R. Brown (GRB) Convention Center despite intermittent rain to give their thanks to God and the Virgin Mary.

The event began with a blessing of the procession by Father Italo Dell’Oro, CRS, vicar for Clergy and secretariat director for Clergy Formation and Chaplaincy Services for the Archdiocese. Daniel Cardinal DiNardo celebrated Mass at the convention center to close the celebration. At the end of Mass, the Cardinal DiNardo urged the crowd to write letters to Congress “in English, Spanish or even Swahili as long as you write” in support of keeping the Dreamers Act.

Since 2012, about 800,000 young undocumented have secured permits from the U.S. government allowing them to work and attend college without fear of deportation under an Obama-era program.

But President Donald Trump ended the deferred action program in September and set a March 5 deadline for Congress to act before the bulk of the permits begin to expire at the rate of nearly 1,000 per day. A deal on Capitol Hill must be done before the end of December because a bipartisan agreement would be more difficult in a midterm election year, according to news reports.

Cardinal Dinardo, as national president of the U.S. Conference of Catholic Bishops, said, “All of us bishops are doing what we can to keep Dreamers alive.”

This year, organizers invited special musical group Jesed from Monterrey, México, to serenade the Blessed Mother and had the crowd on their feet.

“It is a special day where we join together to show our admiration and respect and to present our offerings for the countless blessings we have received all year,” said Joe Castro, interim director of the Office of Hispanic Ministry for the Archdiocese. “It is an opportunity to join together and celebrate with our bishop this day that is so meaningful for our Church.”

Castro said that, with many in Houston still recovering from the devastation of Hurricane Harvey, the symbol of Our Lady resonates throughout the community.

“This celebration joins us in that maternal hope of Our Lady of Guadalupe... It is she who says ‘Am I not here, who is your mother?’” Castro said. “This day is a day of miracles where we seek that divine protection.”