A Church made brighter: 2,143 in Galveston-Houston among tens of thousands of new Catholics welcomed into the Catholic Church across the U.S. 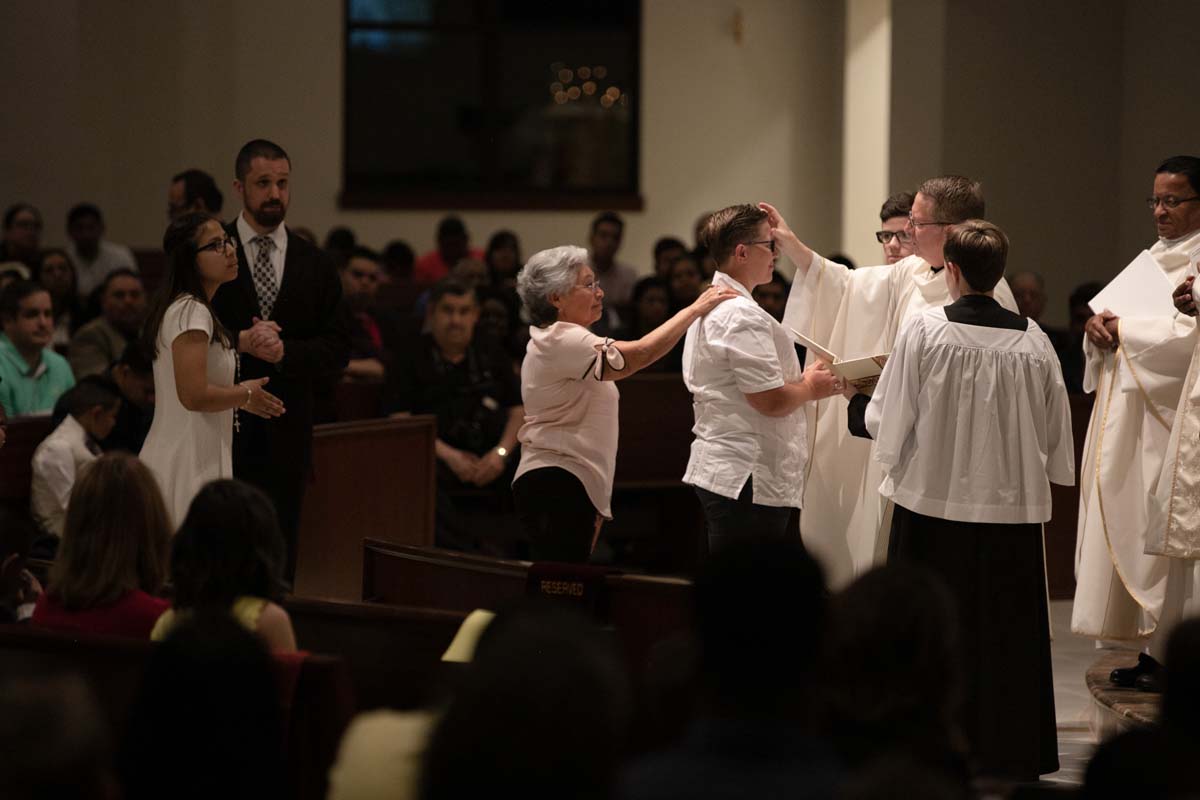 Amy Zeringue receives her First Communion from Father Philip Wilhite, pastor of Sacred Heart Catholic Church, during Easter Vigil Mass on April 20 at the Conroe parish. The Archdiocese of Galveston-Houston welcomed 1,512 catechumens and 631 candidates into the Catholic Church over the Easter weekend. Photo by James Ramos/Herald.

HOUSTON - Thousands of new Catholics were welcomed into the Catholic Church at Easter Vigil Masses throughout the Archdiocese on the evening of April 20 as they processed in holding lit candles into darkened churches.

As the culmination of the Easter Triduum, the vigil celebrates the passion, death and resurrection of Jesus Christ. While people can become Catholic at any time of the year, the Easter Vigil is a particularly appropriate moment for adult catechumens to be baptized and for already-baptized Christians to be received into full communion with the Catholic Church. Parishes welcome these new Catholics through the Rite of Christian Initiation of Adults (RCIA).

More than 37,000 people were welcomed into the Church at Easter Vigil Masses, based on reports from U.S. dioceses to the U.S. Conference of Catholic Bishops.

Among those in Houston is Alfredo Acosta, experiencing both intense sorrow and joy over the past two years that led him to become a Catholic. He suffered the loss of his two younger brothers who passed away, but then he also celebrated the birth of his son, Benjamin, now 18-months old.

“Losing both my brothers really put our family through a lot,” he said. “But the community and prayers helped us.”

“My wife Gricelda is a cradle Catholic. She was born into her faith. Then we baptized our son last year, so I wanted to be able to share our faith with both of them,” Acosta said.

So Acosta and his wife started off this year by convalidating their marriage Jan. 5 at St. Jerome Catholic Church. Then on Easter Vigil at St. Jerome he was blessed with the Sacraments of Initiation. Taking RCIA classes at St. Jerome since last year, Acosta credited his teacher with instilling in him the excitement of being able to partake in Communion.

Acosta said, “My teacher told us how much happiness you feel when you’re able to take the bread and wine, the Body and Blood.”

Other catechumens and candidates say they were also inspired by the witness of Catholics in their lives.

In Conroe, Amy Zeringue’s joy was palpable after her Baptism at Easter Vigil Mass at Sacred Heart Catholic Church. Stepping into the parish’s large baptismal font, the 27-year-old didn’t hesitate to greet her pastor, Father Philip Wilhite, with a smile before he baptized her, gently immersing her three times into the holy water.

After Father Wilhite helped Zeringue step out of the baptismal font, Zeringue realized her journey to the Church had reached its fulfillment: she was a baptized member of the Roman Catholic Church. Zeringue said she never thought she’d get to that point: finding herself standing in the cool waters of a baptismal font of a Catholic Church on Holy Saturday.

“I never would’ve thought I would’ve been getting baptized,” she said. “After [Father Wilhite] baptized me, I came up and I wanted to cry, but I didn’t cry. It’s just an amazing experience. I really feel beyond blessed.”

During that Mass, generations of Catholics, even two siblings and a pair of brothers — one seemingly apprehensive, hands folding nervously, the other smiling, and giddy before stepping into the water — joined Zeringue in becoming full members of the Catholic Church.

Across the Archdiocese, at the Chapel of St. Basil at the University of St. Thomas in Houston (UST), 20-year-old Bruce Park and his older brother Brandon, were also experiencing the grace of the Catholic Church. Bruce, a sophomore at the university, credited his RCIA experience for allowing him to more “intimately explore” the concepts that he was learning in his theology courses.

“Being a smaller and more casual environment, RCIA gave me the opportunity to ask questions and participate in a manner that I would have been able to do so in a classroom environment,” Bruce said. “These personal and inner discussions pushed my understanding of my faith beyond the formal and grounded it more into my life.”

The RCIA journey was familiar to Brandon, 24. He was raised Catholic, but had never received any of the Sacraments or catechism growing up. During his education at UST, Brandon entered the RCIA process and joined the Catholic Church in 2015. In this time, Bruce witnessed his brother’s experience and slowly discerned his eventual journey to the Catholic Church.

A year later, Bruce would also become a Catholic, with Brandon as his confirmation sponsor.

“My brother has been my closest friend throughout my life, and to now have that relationship enriched with this understanding of God has transcended that bond,” Bruce said. He admits their relationship hasn’t always been easy, but he said the two brothers bonded over his journey to Catholicism, “and the spiritual life has strengthened our relationship.”

Bruce drew the parallel of his own life and Brandon’s experience of joining the Church while in school. He said his RCIA experience came to life as he explored theology concepts in class and through people he encountered along the way.

Brandon said it was a “great honor” to walk with his brother through Bruce’s RCIA. Having joined the Church just four years prior, he said “it felt almost poetic in that I was able to be there and welcome my brother into the Church.”

Pope: We will rise again

Earlier that evening, the same night that Zeringue, the Park brothers and Acosta and thousands of others joined the Church, in his April 20 Easter Vigil homily, Pope Francis said, “Easter teaches us that believers do not linger at graveyards, for they are called to go forth to meet the Living One.”

“Sometimes we go only in the direction of our problems, of which there are plenty, and go to the Lord only for help,” Pope Francis said on Holy Saturday during Easter Vigil Mass in St. Peter’s Basilica.

“Let us put the Living One at the center of our lives,” the pope said. “Let us ask for the grace not to be carried by the current, the sea of our problems; the grace not to run aground on the shoals of sin or crash on the reefs of discouragement and fear. Let us seek Him, let us allow ourselves to be sought out by Him, let us seek Him in all things and above all things. And with Him, we will rise again.”