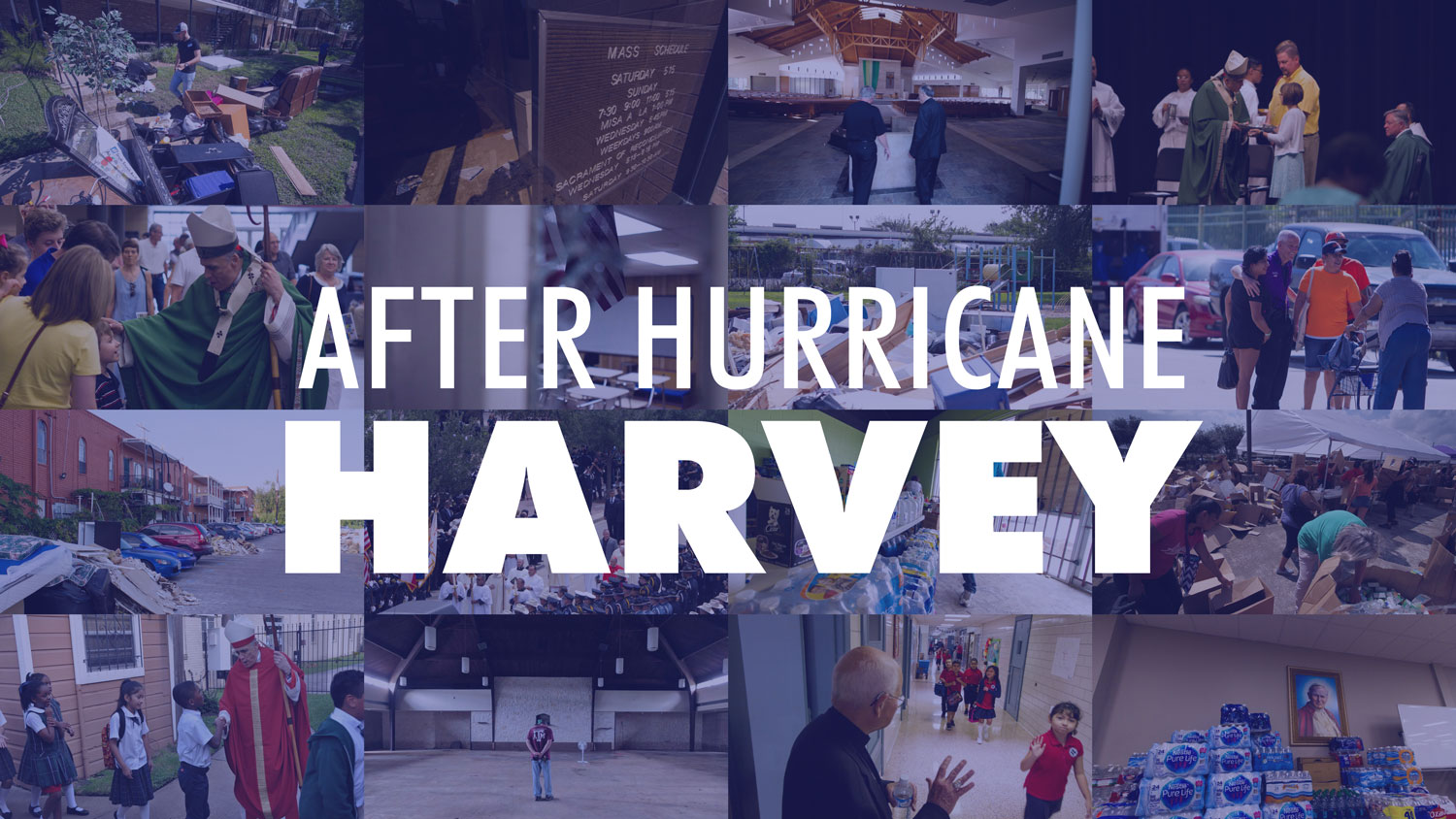 HOUSTON — More than four months following the landfall and subsequent devastation of Hurricane Harvey, the return to “normalcy” for thousands of families around the Archdiocese of Galveston-Houston remains a great challenge.

But in the aftermath of Harvey, the selfless generosity and triumphant spirit of countless people and organizations in our local communities and beyond have not only provided much-needed help and hope to those affected by the storm, they inspired others to follow their lead.

Among those spearheading these efforts have been the social outreach agencies of the Archdiocese. Catholic Charities, the Society of St. Vincent de Paul and San José Clinic, all three mobilizing right after the storm made landfall, continue to assist local families rebuild their homes and their lives.

The Archdiocese has also experienced a most generous outpouring of support from individuals, families, corporations and school and church communities representing all denominations during this most trying time on the Texas Gulf coast.

At San José Clinic, through community support and volunteers from around the world, the clinic delivered care to thousands affected by Harvey directly after the storm, both in Houston and at satellite locations in hard-hit, rural areas of Brazoria and Fort Bend counties.

The clinic delivered nearly $500,000 in care in the wake of Hurricane Harvey through the support of community support and aid partners, locally and nationally, and experienced a 111% increase in patient visits compared to past years. San José Clinic continues to provide quality, affordable medical, dental, and pharmacy care, as well as a full range of diagnostic services, to low-income, uninsured in the community at 2615 Fannin, Houston 77002.

In addition, limited care is currently available one day per week in Brazoria County at Most Holy Trinity Catholic Church.

The Knights of Columbus, whose distribution sites scattered the region in some of the hardest hit areas like southeast Houston, Dickinson and Spring, was critical in offering support immediately after the storm.

Knights of Columbus Charities raised $3.8 million for disaster relief in the months following the disasters. More than $720,000 was used to pay for food, water and other critical supplies in the immediate aftermath of the hurricanes. On a local level, many Knights took the initiative to rescue those stranded by rising waters and to help neighbors in a variety of ways.

“Getting parish facilities up and running again does not just meet a practical need,” said Knights CEO Carl Anderson. “The people in the affected areas see the revival of their churches as a spiritual joy and as an important signal of recovery for the larger communities that surround these churches.”

Their support extended across the Gulf Coast, providing $1.4 million to repair or help rebuild churches that were destroyed or badly damaged in the late summer hurricanes that assaulted Texas, Florida and the U.S. Virgin Islands. Church repair and renovation has been a key component of Knights’ relief efforts in the past. Donations supported the Archdiocesan Harvey Relief Fund, St. Francis of Assisi Catholic Church in Houston, Shrine of the True Cross in Dickinson, Our Lady of Victory Cathedral in Victoria, and several parishes in the Corpus Christi and Beaumont dioceses.

Local Knights of Columbus councils continue to support Harvey relief efforts, including from Mary Queen KC Council No. 8494 in Friendswood. The Galveston-Houston Knights of Columbus also donated $100,000 to St. Francis of Assisi and Shrine of the True Cross.

“The Knights of Columbus is committed to building up Catholic families and strengthening parish life,” said Anderson. “The effort to restore these much-needed houses of worship is appropriate for the Knights, who are most effective within the local parish structure of prayer and service to others.”

Many of these local Knights also suffered during Harvey themselves and with their families. According to reports, at least 532 Knights reported damage. 84 of the 120 councils were affected. $400,000 was provided to support these Knights in their time of need.

Of the 61 Catholic schools in the Archdiocese, a number saw damage while two have been entirely displaced, including St. Francis of Assisi Catholic School in Houston and True Cross Catholic School in Dickinson. The attending students are temporarily housed at nearby Catholic schools while their home campuses, both of which saw their parishes catastrophically destroyed, are renovated and improved for the coming school days.

“The destruction of homes and even church buildings has been covered by the media, but many, even among relief organizations, have failed to account for displaced students who have been uprooted and often are left difficult choices in pursuing their education,” Daniel Cardinal DiNardo wrote to a brother bishop in Delaware who donated to the Archdiocese.

Across the U.S., hundreds of Catholic schools and parishes have reached out to both the Archdiocese and the Catholic Schools Office (CSO) to offer financial and spiritual support.

St. Junipero Serra Catholic School in Rancho Santa Margarita, California, not far from the raging Thomas Fires that have ravaged thousands of Los Angeles-area homes in November, donated a large box of work gloves, to the Archdiocesan Mission Office and to Catholic Relief Services in Houston. The work gloves were signed by the students of the school who worked to gather them.

All Saints Catholic Academy, a Catholic school in New York, organized a “Toys for Texas” campaign to benefit children affected by Harvey. In correspondence sent to the CSO, All Saints officials said seeing the devastation caused by Hurricane Harvey in coastal Texas was particularly poignant for their community, which experienced Hurricane Sandy in 2012.”

At the Catholic Newman Center at Rice University, campus minister Nicole Driscoll said a brief appeal for Rosaries to share with parishes in the Archdiocese grew to an effort that yielded at least 45,000 donated Rosaries — many of them handmade — that came by the boxful. By November, the Newman Center was still receiving Rosaries by the boxful. Driscoll said the surplus of Rosaries have been sent to storm-stricken Florida, Puerto Rico, El Salvador, Nicaragua and Honduras.

In the immediate days after the storm, many parishes served as emergency shelters and donation centers.

One of the many outreach outfits was based at St. John Vianney Church in Houston — whose adjacent community in the Energy Corridor was hit particularly hard by Harvey — volunteered their clean-up services to homes and properties devastated by storm.

As thousands still recover from Harvey, Archdiocesan parish communities and groups will continue to help those in need.