Co-Cathedral of the Sacred Heart

The Most Reverend Nicholas A. Gallagher, the third Bishop of Galveston, established Sacred Heart Parish as the fourth parish in Houston, Texas on November 22, 1896 to serve the growing Catholic population of Houston.  The first church was built at the corner of Pierce St. and Fanin St. in downtown Houston.  It was dedicated by Bishop Gallagher on November 6, 1897.  A new church was built and dedicated by Bishop Gallagher on April 14, 1912.

Due to the phenomenal growth in the city of Houston and the consequent increase in the number of Catholics and Catholic institutions, Pope John XXIII designated the city of Houston to be an episcopal city, effective on December 24, 1959. Thus the Diocese of Galveston was henceforth to be known as the Diocese of Galveston-Houston. This did not change the status of the city of Galveston as an episcopal city established in 1847, the first such city in the state of Texas. With the elevation of Sacred Heart Parish to a Co-Cathedral, it became co-equal in rank with St. Mary Cathedral Basilica in Galveston. With this designation, an episcopal chair was also installed in Sacred Heart Co-Cathedral. Full episcopal ceremonies could then be celebrated in Houston, as well as in Galveston.

With the new millennium came the continued growth of Houston and growth of the Catholic community in the area.  It soon became clear that a new, larger church was needed. On April 2, 2008, Cardinal DiNardo dedicated the new Co-Cathedral of the Sacred Heart, located one block north of the old church.

The Co-Cathedral of the Sacred Heart is an active parish, offering daily Masses and events.  You can learn more on their website at http://sacredhearthouston.org/. 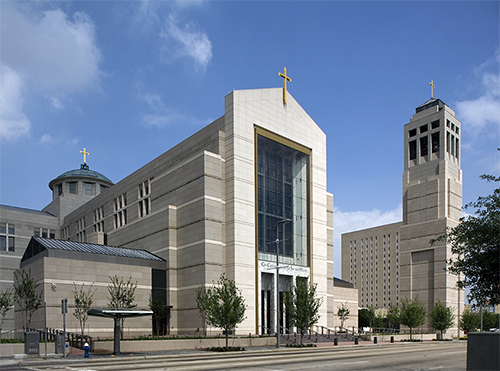