In November of the same year, he was elected by his brother bishops as the Vice-President of the United States Conference of Catholic Bishops (USCCB) for a three-year term. Cardinal DiNardo servedas President of the USCCB from Nov. 2016 - Nov. 2019. 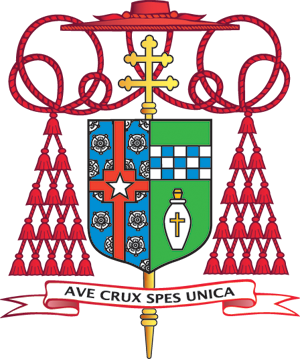 The Archepiscopal heraldic achievement or Archbishop's coat of arms is composed of a shield with its charges (symbols), a motto scroll and the external ornamentation. The shield, which is the central and most important feature of any heraldic device, is described (blazoned) in 12th century terms that are archaic to our modern language, and this description is presented as if given by the bearer with the shield being worn on the arm. Thus, where it applies, the terms dexter and sinister are reversed as the device is viewed from the front.

By heraldic tradition the arms of the Bishop, who is the "first among equals" of an ecclesiastical province, called a "Metropolitan Archbishop," are joined, impaled, with the arms of his jurisdiction. In this case, these are the arms of the Archdiocese of Galveston-Houston.

These arms are composed of a blue field on which is displayed a scattering (semé) of silver (white) roses. These roses are used to represent the Blessed Virgin Mary, in her title of the Mystical Rose, titular of the Cathedral-Basilica in the See City of Galveston. Upon this symbolism is a red cross of The Faith, with a square center that contain a single silver star to represent Texas, the "Lone Star State."

For his personal arms, His Eminence, Daniel Cardinal DiNardo continues to use the design that was adopted upon his selection to receive the fullness of Christ's priesthood as a bishop, when he was appointed and ordained as Coadjutor Bishop of Sioux City and which he used as Bishop of Sioux City, Coadjutor Bishop of Galveston-Houston, and Coadjutor Archbishop of Galveston-Houston when the diocese was raised to Archiepiscopal status.

In the Archbishop's design, on a field of green is seen "a fess," which is a bar that traverses the shield from side to side. This fess is composed of alternating blue and silver (white) squares that form the "checkerboard" pattern. This device is taken from the arms of the Diocese of Pittsburgh which His Eminence has had the honor to serve as a priest. The green color of the field recalls the maiden name of Archbishop DiNardo's mother, "Green."

In the lower portion of the design is seen a silver (white) oil jar that is charged with a golden cross. This symbol is used to "cant," that is to "play-on," the Archbishop's surname of DiNardo which means "of the nard," of "of the ointment." The placement of the cross on this container indicates that the oil is holy oil, or Sacred Chrism, which is the oil that is used for the ordination of bishops and priests, and which has had, and will have, such a significant impact on the life of Daniel DiNardo, priest, Bishop, Archbishop, and now Cardinal.

For his motto, His Eminence, Cardinal DiNardo continues to use the phrase, "Ave Crux Spes Unica." This phrase, which is taken from the beginning of the 3rd verse of the Latin hymn Vexilla Regis, by Venantius Fortunatus (d. 609), is translated to express the deep and profound Christian belief that it is the Cross of Christ that is the standard that we must follow, in all that we do, as we live, sing and say "Hail, O Cross, Our Only Hope."

The achievement is completed with the external ornaments which are a gold Archepiscopal processional cross, that has two cross-members, that is placed in back of and which extends above and below the shield.

As a Cardinal, Archbishop DiNardo's shield now has a red galero (wide-brimmed hat) with 15 tassels on each side. The motto and the scutcheon are proper to the individual Cardinal.