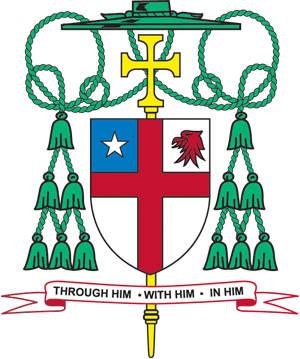 The episcopal heraldic achievement, or bishop's coat of arms, is composed of a shield, which is the central and most important part of the design; a scroll with a motto; and the external ornamentation. The design is described (blazoned) as if the description is being given by the bearer with the shield being worn on the left arm. Thus, it must be remembered, where it applies, as the device is viewed from the front that the terms sinister and dexter are reversed.

By heraldic tradition the personal arms of the bishop who is appointed to the episcopacy without territorial jurisdiction, such as an auxiliary bishop, covers the entire shield on the design.

Bishop Sheltz' arms are composed, basically, of a silver (white) field on which is displayed a red cross throughout. This configuration is known as a "Cross of Saint George," and it is used here for the Bishop to honor his Baptismal patron. The Cross of Saint George is "differenced" by changing the quarter to the upper left (chief dexter) to be a blue field with a single silver (white) star to honor the Bishop's home of Texas, "The Lone Star State," and by adding a red Eagle's head to the upper right (chief sinister) to honor St. Thomas High School, which had had such a significant impact on the bishop's life.

For his motto, His Excellency Bishop Sheltz has selected the phrase, "Through Him – with Him – In Him," from the Great Doxology of the Holy Mass. By its use, His Excellency expresses that as a Christian all that we have, all that we do and all that we are is from, in and through Jesus Christ, the Savior of the world.

The achievement in completed by the external ornamentation which are a gold (yellow) processional cross, that is placed in back of the shield and which extends above and below the shield, and the pontifical hat, called a "galero," with its six tassels in three rows on either side of the shield, all in green. These are the heraldic insignia of a prelate of the rank of bishop, by instruction of The Holy See, of March 31, 1969.

This explanation was contributed by Deacon Paul J. Sullivan of the Diocese of Providence, Rhode Island, who was the original designer of Bishop Sheltz' Coat of Arms.

HOUSTON — Heraldry may seem like an outdated practice, evoking images of castles, knights and ladies.

The coat of arms was first developed and used in medieval times as a way of identifying families, individuals or clerics. In many ways, a coat of arms is like an intricate logo, used to help brand a person or family and give some insight to who they are and where they came from.

There are several decorative elements around the shield itself that comprise the coat of arms. These items include the ecclastical hat, cross, tassles and motto.

The use of an ecclastical hat on a coat of arms probably originated with the red hats worn by cardinals as vestments starting in 1245.

Catholic cardinals have red hats and tassles atop their shields while bishops have green hats.

The number of tassles is another indicator of rank or hierarchy. Bishops have six tassles, archbishops have 10 tassles and cardinals have 15.

A cross is incorporated as well to identify bishops as Christian leaders and as imitators of Christ.

A motto, usually of the bishop or cardinal’s choosing, is included on a ribbon under the shield. This is a statement chosen by the bishop that speaks strongly to his beliefs.

The shield itself is the heart of the coat of arms. These are unique to each bishop and usually include symbols which “tell the story” of that individual.

Symbols vary greatly with each individual but may speak to his interests, background or former service.

Bishop Sheltz’ shield is a good example of this. The design elements on his shield echo his status as a native Texan and Houstonian and reflect his Catholic education and upbringing.